Thirty one dolphins were found dead in the Crimean Peninsula in Southern Ukraine, the press office of the Emergencies Ministry in Crimea reported Tuesday.  According to officials, the dead dolphins were scattered in an area of 2 km along the coastal zone.

Experts said the probable cause of the mammalian deaths is getting into the fishing nets. The majority of the dolphins have visible wounds on their body, some of them have damaged or missing fins.

Now the experts are conducting a thorough investigation into the death of these animals. After the investigation, they will give the results to the Island's environmental prosecutor's office.

The dead dolphins belong to the sort of harbor porpoises, the smallest dolphins that live in the Crimean Peninsula coastal waters.

They are listed in the Red Book of Ukraine and the International Red Book as endangered species. Harbor porpoises are protected by several international legal rules. 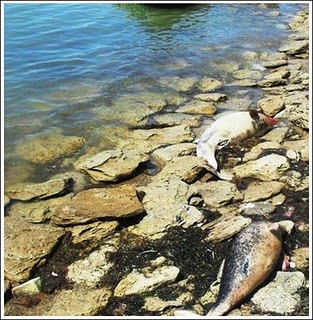