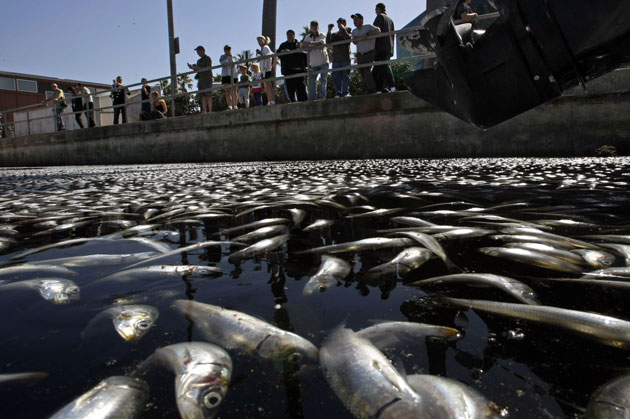 Hundreds of fish have been found dead in Ventura Harbor. This is the second large fish kill in Southern California this year. This time, hundreds of dead fish are floating in Ventura Harbor. Boaters were already noticing a large number of dead fish floating in the water. One officer said that in the past year, there have been three or four times that this has happened, and in recent days, he was worried that this was going to happen again. This fish kill is on a much smaller scale compared to what was seen in Redondo Beach early last month when 2.5 million sardines were killed weighing roughly 175 tons.

Two dead dolphins that washed up on the shores of Newport Beach on Sunday appear to have died from domoic acid, a poison that can be deadly to large sea mammals and birds. Another dead dolphin was found at Sunset Beach on Monday afternoon, as well as three dead sea lions. On Saturday, a large adult dolphin seemed disoriented and was swimming on the inside of surfers close to shore on the north side of the Newport Pier. It is unclear if it was one of the same dolphins found dead on shore.
News reports show that in August 2010, an outbreak of domoic acid was sickening birds and sea lions off the coast. An outbreak occurred in 2007 when sea lions and pelicans suddenly started washing up on shore, and in 2002-03 a large outbreak caused the deaths of more than a thousand sea lions and 50 dolphins, according to past reports.

The domoic acid is caused by a bloom of a diatom called tseudonitchia, a one-celled animal that lives in the ocean, according to Evans. It bloomed and caused a toxin called domoic acid. Small fish eat this, then larger fish eat those fish, and so on until it moves up the food chain to larger animals.
People can be affected if they receive large doses of domoic acid poisoning – for example, by eating shellfish. Over the years, a few deaths and some illnesses have been reported. 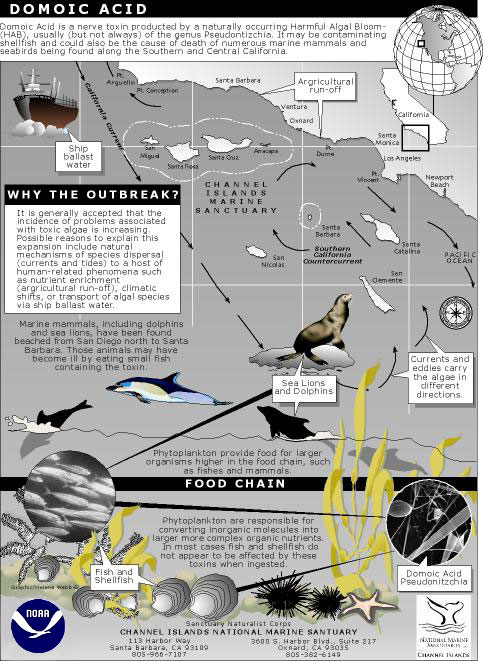