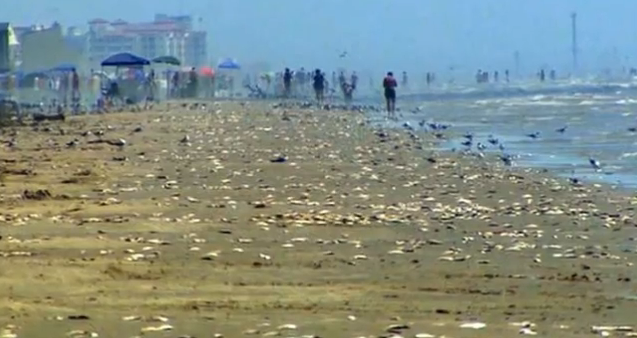 Thousands of dead fish, most of them Gulf Menhaden, or shad fish, are washing ashore along the Texas coast, from the Colorado River to Galveston Island. Crews went to work on Monday, August 13, 2012 to remove them.

And while biologists with the Parks and Wildlife Department began testing pH, saline and oxygen levels in water samples taken along the coast the authorities said the answer to question what caused it is not very simple.

”When something’s affecting one then usually a lot of them are being affected at the same time because it’s such a big group together,” said Steven Mitchell of Texas Parks and Wildlife.

He suspects low oxygen in the water is a problem. However, he won’t know for sure until biologists are able to test water up to 10 miles offshore. That could take several days.

Peter Davis of the Galveston Island Beach Patrol estimated hundreds of thousands of fish have died.