A low aloft over the Hawaiian Islands was responsible for bringing rare severe weather Monday afternoon. The storms produced small hail, flash flooding, and even multiple water spouts. Along with the frequent lightning, flash flooding was an issue with some areas receiving over 3 inches of rain in a 12-hour period. On the Big Island, Highway 190 south of Kamuela, was temporarily closed due to water and debris crossing the road.

This same storm prompted winter weather advisories for Mouna Kea and Mauna Loa (above 8,000 feet) where snow, freezing drizzle, and fog have created dangerous driving conditions in the mountains. Snow accumulations of 1-3 inches are possible by Wednesday morning. The low that caused this severe weather is slowly weakening and moving off to the southeast. As it does so, an area of high pressure will build in from the northeast, bringing an end to any severe weather threat. (AccuWeather)

A Large Waterspout, A So-Called Tornado on Water, Hit Off the Coast off Honolulu, Hawaii on May 2. Hawaii saw some extreme weather on May 2, 2011 with heavy wind and rain hitting several islands.

Hawaii experienced a tornado or waterspout. Waterspouts are funnel clouds that touch on water and connect to a cumuliform cloud, essentially a tornado on water. Waterspouts often develop around thunderstorms. One such waterspout showed up near Honolulu. There were no reports of any injuries caused by the Hawaii 'tornado.' (NowPublic) 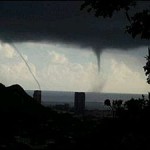 Waterspouts, tornadoes that touch on water, are not themselves made of water; they are funnel clouds that shoot down from storm clouds. This "tornado on water" touched down over the ocean off Ala Moana, a district of Honolulu. In areas where intense funnel clouds commonly form over water — the Florida Keys and the Adriatic Sea are two examples — waterspouts will frequently form along a line of developing thunderstorms.

That was the case yesterday, as an intense lightning storm with heavy rains knocked out power for 60,000 residents, according to the Hawaiian Reporter. The heavy rains soaked Honolulu and triggered a flash flood warning.

A similarly unusual weather event was also seen in the Bay Area earlier this year. Waterspouts rarely cause damage, so they usually aren't rated on the Enhanced Fujita tornado damage scale.

Most of the Earth's tornadoes touch down in the area of the United States known as Tornado Alley, bordered by the Dakotas to the north, the Gulf Coast to the south, the Rocky Mountains to the west and the Appalachian Mountains to the east. Southeast of Tornado Alley is Dixie Alley, home to the deadliest tornadoes. In these areas, warm, moist Gulf of Mexico air collides with cool, northern air in the spring. But tornadoes can occur elsewhere and at other times of the year, including tornadoes in winter.

In Hawaii and California, which have different weather patterns than those in Tornado Alley, waterspouts or tornadoes are typically formed as instability in the atmosphere along a cold front meets channelized winds to generate swirling storms. (MSNBC) 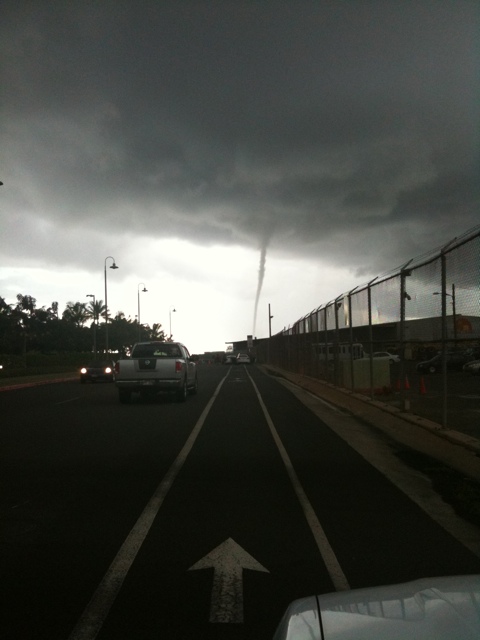 Water spout, or tornado over water, that caused quite a commotion on the south shore of Oahu as it was observed just off of Ala Moana Beach Park, Kaka’ako Beach Park and the Honolulu Harbor for a reported 30 minutes. The south shore observed hard pounding downpour as flooding was almost immediate around waikiki and downtown Honolulu.

The water spout is a funnel of water the pulls up from the ocean just like a tornado would on land, pulling debris and earth along with it. It was quite a sight as traffic stopped, people jumped out in the rain and snapped video’s and pictures of something not often observed in Hawaii. That and all the lightning which is also rare in the islands. (AlohaUpdate)

Category 5 Severe Tropical Cyclone "Harold" is closing in on Vanuatu. A Red Alert is in effect for Sanma, Penama and Malampa provinces, and Yellow Alert for Torba and Shefa. Damaging gale force winds, destructive storm force winds and hurricane-force winds...

India's capital Delhi recorded 109.6 mm (4.3 inches) of rain in March 2020, making it its the wettest March on record, according to the country's meteorological department (IMD). The capital received 589 percent more rainfall than its long-term average for...

Destructive frost hits SE Europe, one of the coldest April mornings in a decade

The northern Balkans experienced one of their coldest April mornings in a decade on Thursday, April 2, 2020, as destructive frost hit many parts of SE Europe during the time of blossoming trees. Many vineyards and fruit plantations across southeastern Europe...

Two fireballs explode within one hour over Belgium, another over southern Germany hours later

Tropical Cyclone "Harold" remains active over the Solomon Sea after it made landfall over the San Cristobal Island on April 2, 2020. Following this, about 28 people aboard a ferry went missing due to rough seas. Harold is the 8th named storm of the 2019/20...

A huge ozone hole has opened this year over the Arctic. While ozone holes normally form in the Antarctic zone every year because winter temperatures drop to extremely low values, allowing high-altitude clouds to develop-- the Arctic has more varying temperatures and...