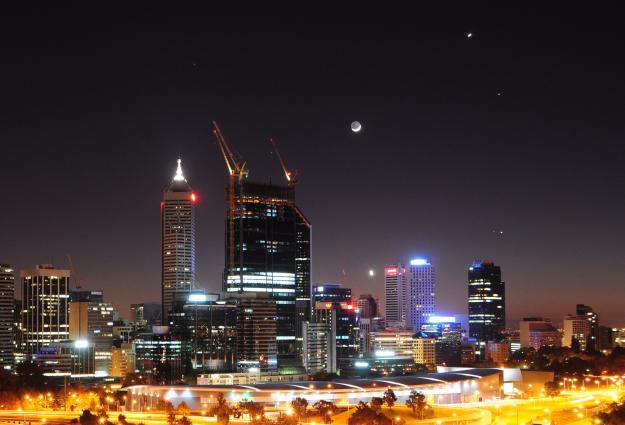 The Great Morning Planet Show of May 2011 is underway. Every morning for the rest of this month, you can see a beautiful gathering of four planets in the eastern sky. They are Mars, Jupiter, Venus and Mercury, shown here on May 1st over Magnetic Island in east Australia: 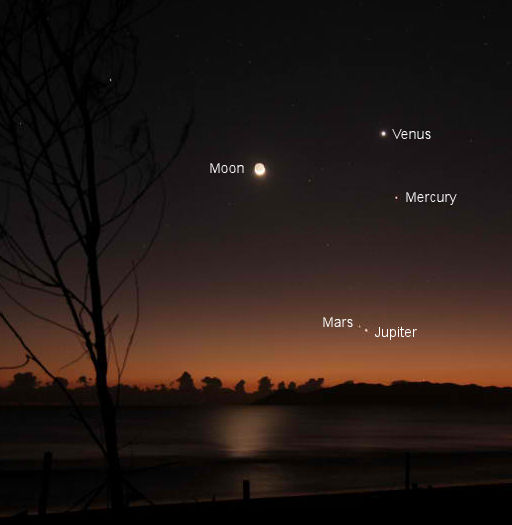 Venus and Mercury have been visible for a couple of weeks, but now Mars and Jupiter have joined them for a four-way conjunction.

An animation from Sky & Telescope shows what is in store for the rest of the month. The quartet of worlds will rearrange themselves on a daily basis, forming different shapes in the pre-dawn sky. The best mornings are the ones around May 11th, when Venus and Jupiter converge to form a tight pair. They are so bright, they might fool you into thinking you’ve witnessed a double supernova beaming through the morning twilight. But, no, it’s just the two brightest planets in our own solar system.

Stay tuned for a whole month of morning marvels! 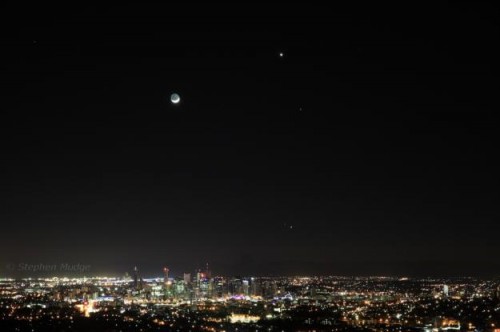 Look low in the west-northwest at dusk for the thin crescent Moon with the Pleiades to its lower right (at the times of twilight for North America), as shown here. Orange Aldebaran is to the Moon’s left.

Sirius in May?? You should still be able to spot the twinkling Dog Star low in the southwest as twilight fades. How much later into the warm season can you follow it down? 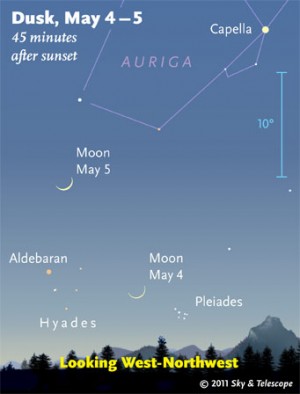 The Moon at dusk poses (for North America) midway between Aldebaran below it and Beta Tauri above it.

The annual Eta Aquarid meteor shower should peak before dawn Friday morning. This is often the best shower of the year for Southern Hemisphere skywatchers, but in northern latitudes it’s much weaker.

From Saturday morning until May 15th, binoculars show Mercury less than 1½° lower right of Venus with Jupiter fitting into the same 5° field of view. Track their changes each clear morning!

The Moon shines in Gemini this evening below Pollux and Castor. Left of the Moon is Procyon. Farther right of the Moon is Capella. These four stars form an enormous arch over the lunar crescent at dusk. This is an archetypal springtime scene, repeated when the Moon is a waxing crescent each April and May. 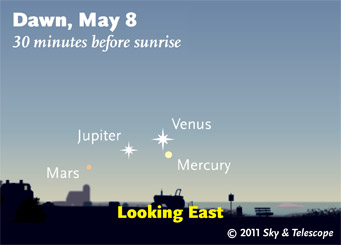 Mercury, Venus, Mars, and Jupiter are deep in the bright glow of dawn. Venus is the least low and by far the brightest. Use binoculars 20 or 30 minutes before sunrise to look below or lower left of Venus for much fainter Mercury. Look farther lower left of Venus for Jupiter. Jupiter is becoming a little higher and less difficult each morning. Mars, faintest of all, is near Jupiter; it passes 0.4° north (upper left) of the giant planet on the morning of May 1st. 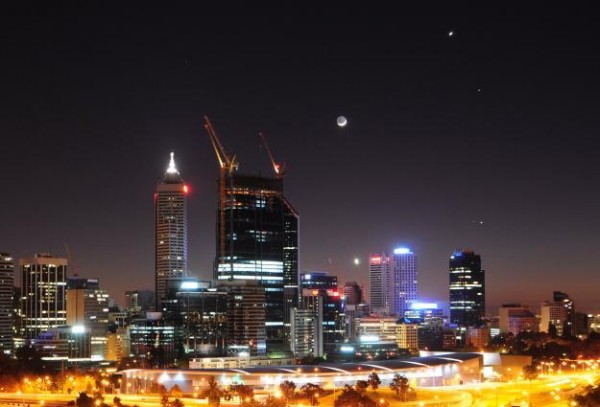 article on the whole next month of this dawn parade — with daily panels in an animation.