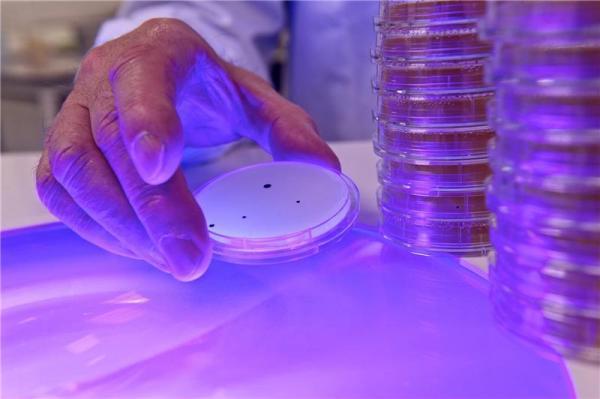 The WHO said abuse of antibiotics for humans and use in animals was fostering the emergence of antibiotic resistance and threatening to take the world to an era before the discovery of penicillin in the 1920s.

The primary cause of antibiotic resistance – genetic mutation in bacteria

The prevalence of antibiotic resistant bacteria is a result of antibiotic use both within medicine and veterinary medicine. The greater the duration of exposure the greater the risk of the development of resistance irrespective of the severity of the need for antibiotics. As resistance becomes more common there becomes a greater need for alternative treatments. However despite a push for new antibiotic therapies there has been a continued decline in the number of newly approved drugs. Antibiotic resistance therefore poses a significant problem.

Plasmid-encoding Carbapenemase-resistant Metallo-B-Lactamase (PCM or NDM-1) is an enzyme that makes bacteria resistant to a broad range of beta-lactam antibiotics. These include the antibiotics of the carbapenem family, which are a mainstay for the treatment of antibiotic-resistant bacterial infections. The gene for NDM-1 is one member of a large gene family that encodes beta-lactamase enzymes called carbapenemases. Bacteria that produce carbapenemases are often referred to in the news media as “superbugs” because infections caused by them are difficult to treat. Such bacteria are usually susceptible only to polymyxins and tigecycline. 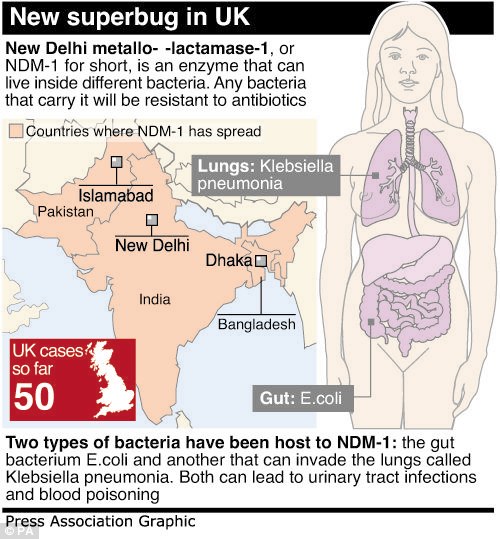 The NDM-1 enzyme was named after New Delhi, the capital city of India, as it was first described by Yong et al. in December 2009 in a Swedish national who fell ill with an antibiotic-resistant bacterial infection that he acquired in India.  It was later detected in bacteria in India, Pakistan, the United Kingdom, the United States, Canada, Japan and Brazil. The most common bacteria that make this enzyme are Gram-negative such as Escherichia coli and Klebsiella pneumoniae, but the gene for NDM-1 can spread from one strain of bacteria to another by horizontal gene transfer.

Dr Timothy Walsh, professor at Cardiff University who discovered the gene, and his team collected 171 swabs of seepage water and 50 public tap water samples from sites within a 12km radius of central New Delhi between September and October 2010. The NDM-1 gene was found in two of the 50 drinking-water samples and 51 of 171 seepage samples.

Worryingly, the gene had spread to bacteria that cause dysentery and cholera, which can be easily passed from person to person via sewage-contaminated drinking water. “Oral-faecal transmission of bacteria is a problem worldwide, but its potential risk varies with the standards of sanitation.

The scientists are calling for urgent action by health authorities worldwide to tackle the new strains and prevent their global spread.

Antibiotic-resistant infections have reached unprecedented levels and now outstrip our ability to fight them with existing drugs, European health experts are warning. Each year in the EU over 25,000 people die of bacterial infections that are able to outsmart even the newest antibiotics.

The World Health Organization says the situation has reached a critical point and  a united push to make new drugs is urgently needed. Without a concerted effort, people could be dealing with the “nightmare scenario” of a worldwide spread of untreatable infections, says the WHO. One example is the New Delhi or NDM-1 superbug recently found in UK patients.

Antibiotics are a precious discovery, but we take them for granted, overuse and misuse them: there are now superbugs that do not respond to any drugs.

“Given the growth of travel and trade in Europe and across the world, people should be aware that until all countries tackle this, no country alone can be safe.

On the tail of prevention

Clinical trials at Glasgow Royal Infirmary have shown that the HINS-light Environmental Decontamination System provides significantly greater reductions of bacterial pathogens in the hospital environment than can be achieved by cleaning and disinfection alone, providing a huge step forward in hospitals’ ability to prevent the spread of infection.