Mark your calendars for an impressive and upcoming flyby of an asteroid (2005 YU55) that’s one of the larger potentially perilous space rocks in the heavens – in terms of smacking the Earth in the future.

It’s the case of asteroid 2005 YU55, a round mini-world that is about 400 meters (1,300 feet) in diameter. In early November, this asteroid will approach Earth within a scant 0.85 lunar distances.

Due the object’s size and whisking by so close to Earth, an extensive campaign of radar, visual and infrared observations are being planned. Asteroid 2005 YU55 was discovered by Spacewatch at the University of Arizona, Tucson’s Lunar and Planetary Laboratory on Dec. 28, 2005. En route and headed our way, the cosmic wanderer is another reminder about life here on our sitting duck of a planet.

“The close Earth approach of 2005 YU55 on Nov. 8, is unusual since it is close and big. On average, one wouldn’t expect an object this big to pass this close but every 30 years,” said Don Yeomans, manager of NASA’s Near-Earth Object Program Office and the Jet Propulsion Laboratory in Pasadena, Calif.

Yeomans said that with new radar capabilities at Goldstone in California — part of NASA’s Deep Space Network — there is a good chance of obtaining radar imaging of 2005 YU55 down to the 5-meter resolution level. Doing so, he said, would mean obtaining higher spatial resolution of the object than that attained by recent spacecraft flyby missions.

“So we like to think of this opportunity as a close flyby mission with Earth as the spacecraft. When combined with ground-based optical and near-infrared observations, the radar data should provide a fairly complete picture of one of the larger potentially hazardous asteroids.”

Asteroid 2005 YU55 is a slow rotator. Because of its size and proximity to Earth, the Minor Planet Center in Cambridge, Mass., has designated the space rock as a “potentially hazardous asteroid.”

“We’re already preparing for the 2005 YU55 flyby,” said Lance Benner, a research scientist at JPL and a specialist on radar imaging of near-Earth objects. He said part of the plan is to observe the asteroid with radar using both the huge Arecibo dish in Puerto Rico and equipment at Goldstone.

To help coordinate the observing campaigns, “Radar Observations Planning” websites have been set up for this unusual occasion. 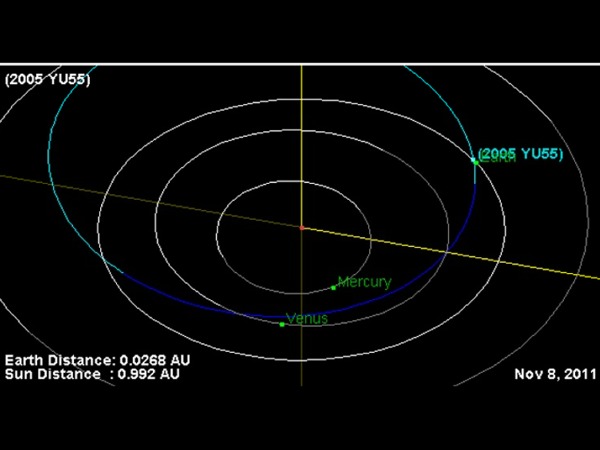 “This flyby will be the closest by any near-Earth asteroid with an absolute magnitude this bright since 1976 and until 2028,” Benner added. “Having said that, nobody saw 2010 XC15 during its close flyby within 0.5 lunar distance in 1976,” he said, noting that this asteroid wasn’t discovered until late in 2010.

Benner said that because the asteroid is zooming by Earth so very close, radar echoes will be extremely strong. One facility at Goldstone will be used to transmit and “radar paint” the object…another Goldstone dish is on tap to snag the reflected echo of radar data.

What can radar do?

Information collected by this technique, for example, can be transformed into 3-D shapes, with surface features and spin rates identified. The asteroid’s roughness and density can also be assessed. Furthermore, radar can improve the whereabouts of the object. By greatly shrinking uncertainties for newly discovered meandering NEOs, that in turn enables motion prediction for decades to centuries.

As for seeing the asteroid with small telescopes, start getting your gear ready. Initially, the object will be too close to the sun and too faint for optical observers.

But late in the day (Universal Time) on Nov. 8, the solar elongation will grow sufficiently to see it. Early on Nov. 9, the asteroid could reach about 11th magnitude for several hours before it fades as its distance rapidly increases, Benner explained. (Space.com)