The Shikhzayirli mud volcano erupted in the Gobustan region of Azerbaijan on March 13, 2011. Witnesses heard an explosion before the eruption, followed by a 50 m high fire.

Experts and rescuers of the Ministry of Emergency Situations immediately arrived at the site to prevent any emergency situation. The fire altitude in the Shikhzayirli mud volcano lowered currently and 1-2 m fire is seen in two centers. Its activation decreased and mudflow is seen in some bald peaks.

Deep grikes were created around the crater. The mud volcano is not threatening the nearby villages. Experts continue researching. (APA) 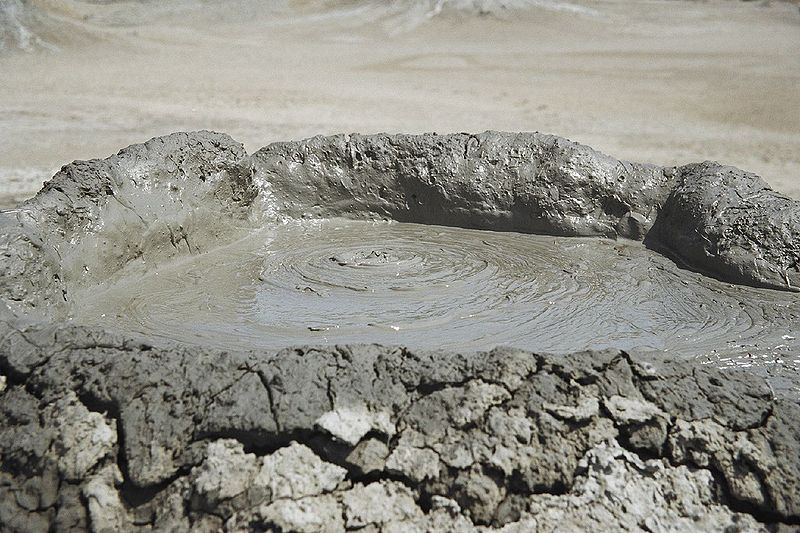 Azerbaijan and its Caspian coastline are home to nearly 400 mud volcanoes, more than half the total throughout the continents. In 2001, one mud volcano 15 kilometres (9 mi) from Baku made world headlines when it suddenly started ejecting flames 15 meters (49 ft) high. In Azerbaijan, eruptions are driven from a deep mud reservoir which is connected to the surface even during dormant periods, when seeping water still shows a deep origin. Seeps have temperatures up to 2 °C (3.6 °F) - 3 °C (5.4 °F) above the ambient temperature.

In the Spring of 2001, volcanic activity under the Caspian Sea off the Azeri coast created a whole new island.

In October 2001 there was an impressive volcanic eruption in Azerbaijan at Lokbatan, but there were no casualties or evacuation warnings. 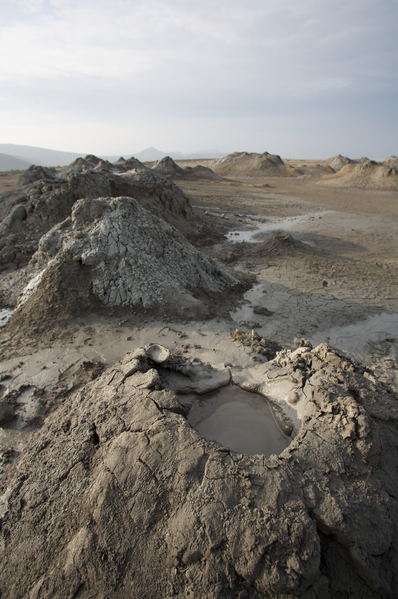 Azerbaijan does not have a single active volcano, at least not in the usual sense of the word. What Azerbaijan does have is mud volcanoes - hundreds of them. Mud volcanoes are the little-known relatives of the more common magmatic variety. They do erupt occasionally with spectacular results but are generally not considered to be dangerous.

Mud volcanoes come in a variety of shapes and sizes, but those most common in Azerbaijan have several small cones, or vents, up to about 4 meters in height (13 feet), sometimes topping a hill of several hundred meters. These small cones emit cold mud, water, and gas almost continually - an amazing and even beautiful sight, which has become part of the tourist itinerary for foreigners visiting Azerbaijan. Azerbaijan and the Caspian Sea are home to nearly four hundred mud volcanoes - more than half the total throughout the world.

Every twenty years or so, a mud volcano may explode with great force, shooting flames hundreds of meters into the sky, and depositing tonnes of mud on the surrounding area. This was the kind of eruption that witnesses described seeing on a hillside 15 kilometers (9 miles) outside the Azerbaijani capital Baku in October 2001. The flame was unbelievably big, about 300 meters high. It was surrounded by dense, black smoke, and lots of mud was being thrown into the air. The biggest flames burned for about five minutes. Then there was another huge explosion, and then they calmed down to about 10 or 20 meters (32 or 65 feet) high. The flames could easily be seen from 15 kilometers away on the day of the explosion and were still burning, although at a lower level, three days later.

Geologists agree on some aspects of the formation and activities of mud volcanoes. They are formed when mud and sand up to several kilometers beneath the Earth's surface are squeezed upwards by compressive forces and expelled. 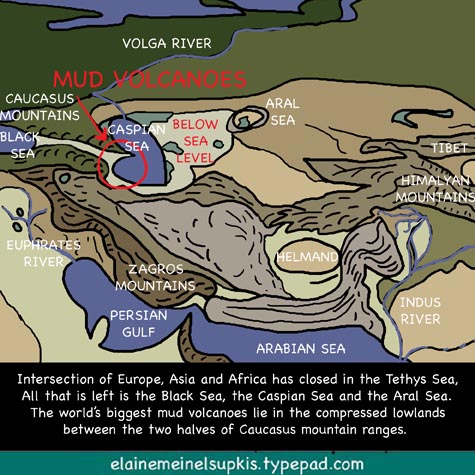 The origins of the volcanoes are disputed. Mud volcanoes are often formed in areas of weakness in the Earth's crust, along fault lines, and are associated with geologically young sedimentary deposits, the presence of organic gas from hydrocarbon deposits, and overlying pressure which forces this gas to the surface.

But when it comes to accounting for the differences between mud volcanoes, their varying shapes and sizes, the gases they emit, and their unpredictable behavior, there is little agreement.

Geologists describe mud volcanoes as "capricious", and are still arguing about exactly how they are formed. Some believe they are created during the sedimentary process itself, while others argue that different processes are also involved, for example, seismic activity.

To the non-geologist, the explanations can seem, well, as clear as mud. But the arguments about their origins only add to the aura of mystery that surrounds these unusual and enigmatic phenomena. 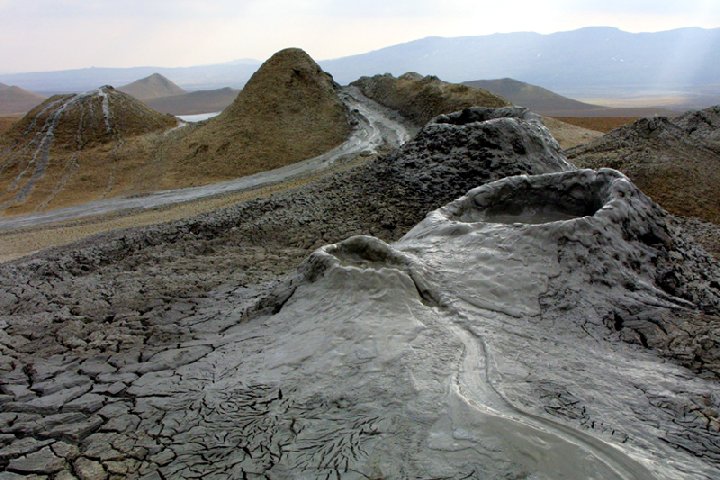