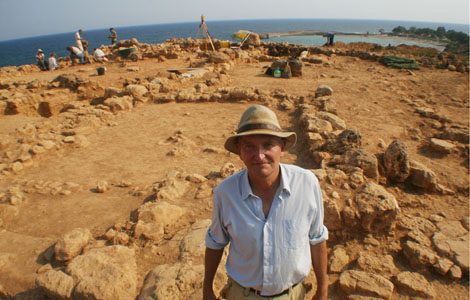 Could the fabled lost city of Atlantis have been located? Using satellite photography, ground-penetrating radar and underwater technology, experts are now surveying marshlands in Spain to look for proof of the ancient city. If the team can match geological formations to Plato’s descriptions and date artifacts back to the time of Atlantis, we may be closer to solving one of the world’s greatest mysteries. (NG)

A U.S.-led research team may have finally located the lost city of Atlantis, the legendary metropolis believed swamped by a tsunami thousands of years ago in mud flats in southern Spain. To solve the age-old mystery, the team used a satellite photo of a suspected submerged city to find the site just north of Cadiz, Spain. There, buried in the vast marshlands of the Dona Ana Park, they believe that they pinpointed the ancient, multi-ringed dominion known as Atlantis.

The team of archeologists and geologists in 2009 and 2010 used a combination of deep-ground radar, digital mapping, and underwater technology to survey the site. Discovery in central Spain of a strange series of “memorial cities,” built in Atlantis’ image by its refugees after the city’s likely destruction by a tsunami, gave researchers added proof and confidence. Atlantis residents who did not perish in the tsunami fled inland and built new cities there. While it is hard to know with certainty that the site in Spain in Atlantis, the “twist” of finding the memorial cities makes him confident Atlantis was buried in the mud flats on Spain’s southern coast.

Greek philosopher Plato wrote about Atlantis some 2,600 years ago, describing it as “an island situated in front of the straits which are by you called the Pillars of Hercules,” as the Straits of Gibraltar were known in antiquity. Using Plato’s detailed account of Atlantis as a map, searches have focused on the Mediterranean and Atlantic as the best possible sites for the city. (Reuters)

Tsunamis in the region have been documented for centuries. One of the largest was a reported 10-story tidal wave that slammed Lisbon in November, 1755. The 1755 Lisbon earthquake, also known as the Great Lisbon Earthquake, was a megathrust earthquake that took place on Saturday 1 November 1755, at around 9:40 in the morning. The earthquake was followed by a tsunami and fires, which caused near-total destruction of Lisbon in the Kingdom of Portugal, and adjoining areas. Geologists today estimate the Lisbon earthquake approached magnitude 9 on the moment magnitude scale,

Experts plan further excavations are planned at the site where they believe Atlantis is located and at the mysterious “cities” in central Spain 150 miles away to more closely study geological formations and to date artifacts.

The huge discovery of a lost world or city that is finally unveiled. This may actually be the rise of Atlantis which has been discussed by many people and prophets over the centuries. This begins to help humanity understand more and brings a whole new bundle of knowledge for us all. The problem I have with this one is exactly how this lost city will be discovered. I have mixed feelings on this and wonder if I may be possibly picking up on two separate major lost cities that are discovered. One part of me feels like this city will be discovered deep in the ocean only a few hundred miles from the coast. Another part of me feels that a large catastrophe such as an earthquake cause a break in the Earth that sucks up a large amount of water therefore unveiling the lost city. I feel these may occur in late 2011 and into the fall of 2012. (Joseph Tittel blog)