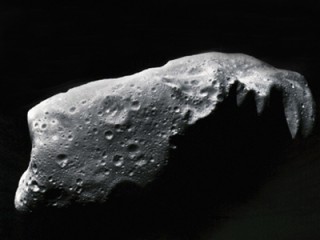 Near-Earth asteroid 2005 YU55 will pass within 0.85 lunar distances from the Earth on November 8, 2011. The upcoming close approach by this relatively large 400 meter-sized, C-type asteroid presents an excellent opportunity for synergistic ground-based observations including optical, near infrared and radar data. The attached animated illustration shows the Earth and moon flyby geometry for November 8th and 9th when the object will reach a visual brightness of 11th magnitude and should be easily visible to observers in the northern and southern hemispheres. The closest approach to Earth and the Moon will be respectively 0.00217 AU and 0.00160 AU on 2011 November 8 at 23:28 and November 9 at 07:13 UT.

Discovered December 28, 2005 by Robert McMillan of the Spacewatch Program near Tucson Arizona, the object has been previously observed by Mike Nolan, Ellen Howell and colleagues with the Arecibo radar on April 19-21, 2010 and shown to be a very dark, nearly spherical object 400 meters in diameter. Because of its approximate 20-hour rotation period, ideal radar observations should include tracks that are 8 hours or longer on multiple dates at Goldstone (November 3-11) and when the object enters Arecibo's observing window on November 8th.

Using the Goldstone radar operating in a relatively new "chirp" mode, the November 2011 radar opportunity could result in a shape model reconstruction with a resolution of as fine as 4 meters. Several days of high resolution imaging (about 7.5 meters) are also planned at Arecibo. As well as aiding the interpretation of the radar observations, collaborative visual and near infrared observations could define the object's rotation characteristics and provide constraints upon the nature of the object's surface roughness and mineral composition.

Since the asteroid will approach the Earth from the sunward direction, it will be a daylight object until the time of closest approach. The best time for new ground-based optical and infrared observations will be late in the day on November 8, after 21:00 hours UT from the eastern Atlantic and western Africa zone. A few hours after its close Earth approach, it will become generally accessible for optical and near-IR observations but will provide a challenging target because of its rapid motion across the sky. 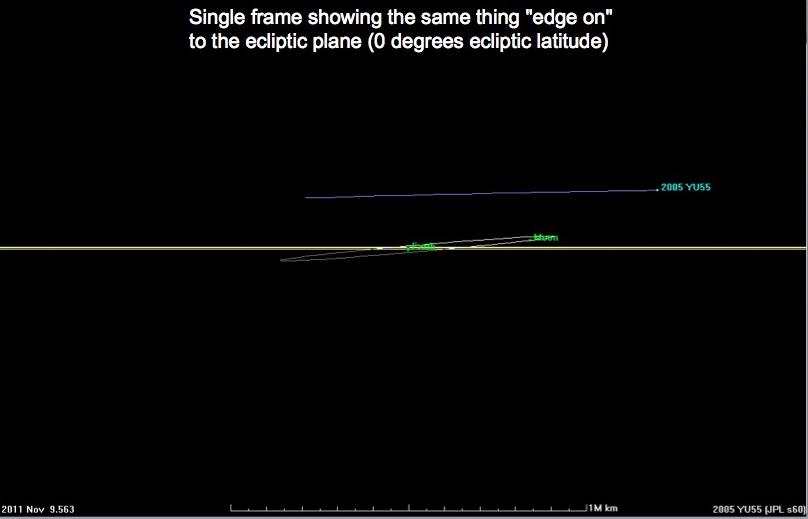 A few hours after its close Earth approach, it will become generally accessible for optical and near-IR observations but will provide a challenging target because of its rapid motion across the sky.

Although classified as a potentially hazardous object, 2005 YU55 poses no threat of an Earth collision over at least the next 100 years. However, this will be the closest approach to date by an object this large that we know about in advance and an event of this type will not happen again until 2028 when asteroid (153814) 2001 WN5 will pass to within 0.6 lunar distances. (SpaceDaily)