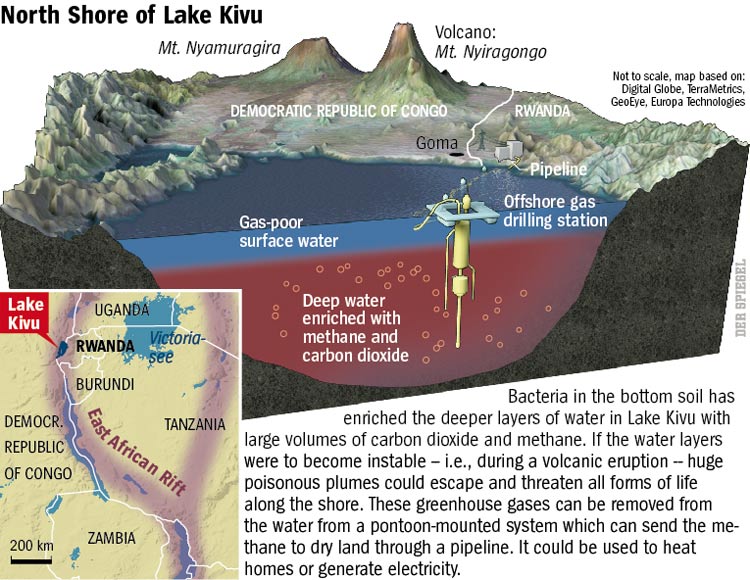 Alarm at Nyiragongo volcano: in his tremendous lava lake swells to a boiler, at any time could be 1200 degrees mass rush to the valley hot and Congolese city of Goma, the flood. Volcanologists present on  from the summit.

The researchers had left the summit of the volcano Nyiragongo in the Congo just as the lava broke out. Just now had the crater spilled the blazing red lava lake, but then pulled the kettle on – he ran like a cut milk carton: The low-viscosity lava roared up to 100 kilometers per hour down torrential like the mountain slopes, it killed 72 people. The researchers had just got off again.

That was in January 1977.Almost to the day 34 years later, in January 2011, volcanologists and adventurers camped once again the largest lava lake in the world on the Nyiragongo in the central African rain forest. Also, they felt safe. And they were lucky, they escaped unscathed.

It is therefore clear: in the volcanic magma rises. The lake with the most highly fluid lava in the world is now almost as high as it was earlier outbreaks. These are signs of an imminent eruption as it is not, but at least since its last eruption in January 2002, almost 3500 meters high Mount Nyiragongo is considered unpredictable.

On 17 January 2002, its lava up to ten kilometers away, shot in Goma , where they killed about 170 people, 120 000 homeless. The many hundreds of degrees hot lava with her unusually watery consistency roared through the streets, inflamed houses and finally solidified into a hunchbacked silvery stone tanks. He has since covered all districts and parts of the airport like a giant grave stone.Cars, houses and road signs protrude from the rock, and roads have been diverted. The neighboring Lake Kivu brought the lava to a boil.

Since the disaster of 2002 trying geoscientists monitor the Nyiragongo. But expeditions are dangerous, threatening attacks, and permanently installed measuring instruments are usually stolen. So researchers access only to limited data.

Volcanologists know: The level in the crater is the best indicator of the threat at Nyiragongo. The higher he climbs, the greater is the magma pressure. The Lake is still well below the crater rim.But not only meant to be spilling over the disaster. The lake is just the tip of a huge magma reservoir, which extends deep into the earth. As in January 2002 would allow the earthquake rupture Lavakessel one kilometer wide and release the magma.

At the outbreak nine years ago, the crater of Nyiragongo had expired completely. Back in 2006, had resumed an imposing lava accumulated. Since then, the level was swelled by another 50 meters, says volcanologist Pfeiffer. He now stands 450 meters below the crater rim. He has nearly the level achieved in previous eruptions.

The 21 expedition members to Tom Pfeiffer – among them three armed park rangers – were camping with their tents right on the crater behind a cliff. Five hours had taken the rise in the humid and hot climate. Petrified lava flows on the mountain slopes, lava on the trees and caves bore witness to earlier outbreaks.Incomparable impressions at the top, the researchers rewarded for their exertions.

“As soon as you lean over the crater rim, a warm wind blowing,” says Pfeiffer. It offers a fascinating sight: “One has the feeling of looking deep inside the Earth,” says Pfeiffer. In the caldera lava surges to 1,200 degrees, hot places hissing their silvery-black crust in wrinkles. From cracks, hissing out the blazing fire. Ten-meter-high lava bubbles rise, until they burst with a crash. Always break through the crust again flame red lava fountains and shoot dozens of meters up.

At night the sky lit up the lava lake: Red clouds are above the mountain peaks in the glow of the crater lake. ”A mesmerizing gurgling like a distant surf penetrates from the caldera,” says Pfeiffer. Only sometimes pungent-smelling fumes reminded the adventurers because they were camping next to a lethal brew.

The lava from the Nyiragongo volcano is more dangerous than the others because it is so thin. The reason for this is their origin in the witches’ brew of the mantle. There, dozens of kilometers in depth, there is less acid, which makes sticky magma. Instead of large quantities of silica the lava contains much of the Nyiragongo sodium and potassium – that accumulate less gas than other volcanoes in the magma. The lava is less explosive, but extremely fast.

Eruption is expected
The Nyiragongo lava lake emptied his every ten to 20 years. Therefore, experts expect in the coming years with an eruption. Locally, however, monitor only a few researchers volcanic mountain. Your spartan in Goma observatory possessed poor funding, says Pfeiffer.

After the outbreak of 2002, dragged geoscientists from all over the world, many tools to Goma to predict future eruptions can be. Where the equipment is left is unclear at present only one or two earthquakes sensor data sent from the mountain, says Pfeiffer.

Only from the air, scientists have the mountain continuously in view: With a radar satellite to researchers measured Christelle Wauthier from Blaise Pascal University in Clermont-Ferrand in France the volcano. Radar beam scans the ground. Before an outbreak would bulge out of the mountain, experts believe. Ground elevations were seen on the radar maps.

Since the last eruption in 2002 is the ground pretty quiet, Wauthier told SPIEGEL ONLINE. Only 2006 were magma movements have been registered, Geoforscherin reported recently on a conference in San Francisco.