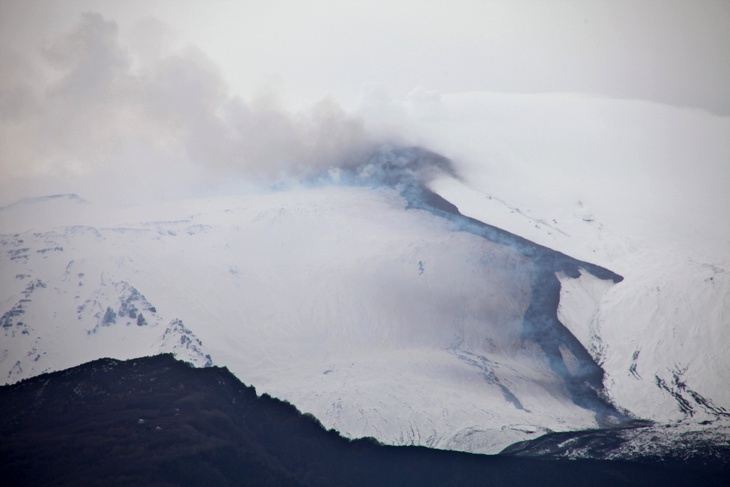 Goma volcano set for another eruption
Previous eruptions in recent times may be dwarfed by the expected next eruption of Mt. Nyiragongo, which towers over the Eastern Congolese city of Goma. Nine years ago, in January 2002, when the region’s most active volcano erupted, the reportedly rather liquid lava swiftly covered a sizeable part of the city and even brought air transport to a complete standstill, when a portion of the runway was covered by lava, which when finally cooled down, was measured to be 6 and more feet thick and as wide as a kilometer, leaving total destruction in its wake and making over 120,000 residents homeless. The absence of monitoring equipment is hampering the ability of researchers to adequately monitor the mountain and predict imminent eruptions. Neither the volcano operators nor the population at large seems overly concerned at this stage, in spite of recent pictures being taken from aircraft flying over the crater, showing it once again filling up with enormous quantities of lava. The African Rift Valley, which extends from the Red Sea across much of Africa to Malawi, has always been an active seismological zone – as another active volcano, Mt. Ol Donyo Lengai in Tanzania demonstrates – but of late, disquieting reports have emerged that the underwater rip in the Red Sea seems to be widening, as minor eruptions have been reported from the border area between Ethiopia and Djibouti. It is there that the ground has also lowered and subsequently seismic monitoring has been substantially increased to provide early alerts of imminent developments. A few months ago it was reported here that the lava’s reflections on low clouds could be seen all the way into Uganda, again underscoring that there is indeed now a growing possibility of another upcoming eruption, many of which in the recorded history of the volcano have come at 10-year intervals.
recommended article More ominous signs that an East African tear is increasing@Extinction Protocol

Kilauea’s lava lake reaches the highest level ever seen
Scientists on the Big Island say it’s been an especially active week at Kilauea volcano – as it continues to erupt in two locations: on the east rift zone and at the summit. The volcanic activity along the summit has died down a little since Monday – when the lava lake at Halemaumau crater reached one of the highest levels ever observed. But it’s still fascinating for both geologists and tourists alike. Kilauea’s fiery summit cauldron ripped open this week, and its beauty is matched only by the roar of its fury. Summit activity isn’t as intense as it was earlier in the week, but the changes have delighted scientists. “It is an exciting time for volcanologists,” says Janet Babb of the U.S. Geological Survey’s Hawaiian Volcano Observatory. “This is the job that we’re trained to do and the kind of research that we’re involved in, so it has been exciting.” On Monday, they watched as a number of rocks fell into Kilauea’s summit vent. Sulfur dioxide emissions remain elevated. Babb explains, “Large sections of the rim of the vent fell into the lava lake below. It caused a lot of degassing, and in a few instances, some explosive events that caused a lot of dusty, ashy plumes to rise skyward.” The lava lake at Halemaumau crater reached one of its highest levels ever this week – indicating an increase in the volume of magma. It’s been rising steadily since last November, but volcanologists aren’t yet sure of its significance. “We’re still seeing these rise fall cycles in the lava lake. Rock falls are still occurring, again not as many as on Monday or Tuesday, but the vent walls continue to break apart, and we expect we’ll continue to see this activity in the foreseeable future.”

New paroxysm at Etna’s Southeast Crater, and strong explosions at Stromboli
Simultaneously with the onset of Strombolian activity, the INGV-Catania seismic network on Etna recorded a rapid increase in the volcanic tremor amplitude, which continued until about 14:30 GMT and then started to decline sharply. A lava flow descended eastward, following the same path as that of the 12-13 January paroxysm, in the direction of the Valle del Bove. Ash falls were reported from the Linguaglossa area on the northeast flank of the volcano in the morning, and later, as wind directions changed, on the western flank around Bronte. The second paroxysmal eruptive episode of the year 2011 from the Southeast Crater occurred on 18 February, 36 days after the previous episode (12-13 January 2011). The full duration of this episode was about 11 hours, with strong Strombolian activity and pulsating lava fountains. Although inclement weather precluded continuous direct observation of the activity, it seems that qualitatively this event was similar to its predecessor, but probably less energetic.

The paroxysm has taken place once more at the pit crater located on the lower eastern flank of the Southeast Crater cone, the only active eruptive vent at this summit cone since the summer of 2007.

The paroxysm was preceded by an explosive sequence presumably from the Northeast Crater, on the late evening of 16 February. Also in that case, direct visual observation was difficult due to the presence of cloud cover. The onset of today’s paroxysm was abrupt, and thus quite different from the long buildup phase that led to the episode of 12-13 January.

Starting shortly after 03:30 GMT (local time -1) on 18 February 2011, the thermal monitoring camera at the Montagnola (EMOT) of the INGV-Catania started recording thermal anomalies at the pit crater located on the lower east flank of the Southeast Crater cone; at the same time, the visible light camera at the Montagnola (EMOV) showed intermittent glow indicating Strombolian activity. During the following hours, extremely bad weather prevented direct observation of the phenomenon. Simultaneously with the onset of Strombolian activity, the INGV-Catania seismic network on Etna recorded a rapid increase in the volcanic tremor amplitude, which continued until about 14:30 GMT and then started to decline sharply. At 14:30 GMT, the eruptive episode was essentially over. A lava flow descended eastward, following the same path as that of the 12-13 January paroxysm, in the direction of the Valle del Bove. Light ash falls were reported (but remain unconfirmed as of late 18 February) from various areas on the flanks of the volcano.