Severe floods lashing portions of Democratic Republic of Congo since late November 2015, have left at least 20 people dead so far and cutoff water supplies to many communities in the area. Last few weeks have marked the worst flooding in years, and conditions could get even worse given the severe weather conditions show no signs of subsiding.

Heavy rainfalls battering the Democratic Republic of Congo, including its capital Kinshasa, over the last 3 weeks brought major flooding to the area, Floodlist reported. According to Emmanuel Akweti, the local minister for the capital's inner city reported 20 deaths since November 29. According to some media reports in the last 3 weeks 31 people died in Kinshasa.

Another weekend of torrential downpours has worsened the conditions as many rivers have overflown their banks. Numerous people have been force to evacuate their homes, and are currently living along roadsides in the city, or in churches, schools and other public buildings providing the shelters. 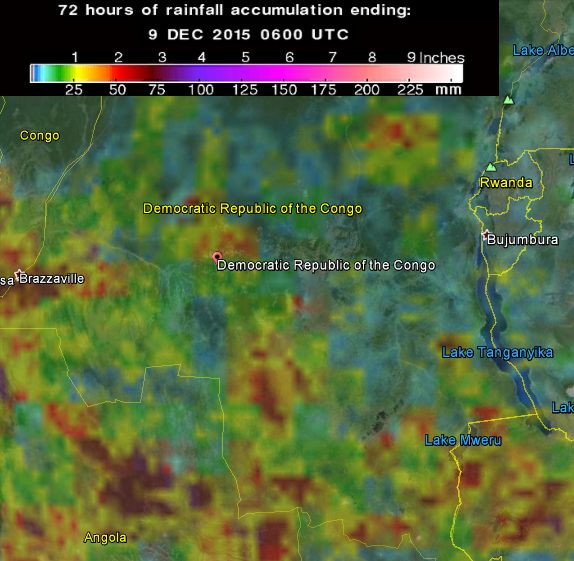 72 mm (2.8 inches) of rainfall was reported in a 24 hour period between December 8 and 9 in Kinshasa, while 136.9 mm (5.4 inches) were measured in Bukavu in South Kivu province between December 6 and 7, according to World Meteorological Organization (WMO).

Reuters reported the rainfall in Kinshasa measured 450 mm (18 inches), a third of its annual average, in the period between November 17 and December 6. Media reports suggest the area might have received a month's worth of precipitation over the last week alone.

The Regideso water plant was strongly affected by the weather conditions, and the water shortage has been estimated to affect 17 districts in eastern and central Kinshasa.

The River Congo has flooded parts of Équateur province. The worst hit area was the Bumba in Mongala District where almost 400 houses have been devastated, according to the local Red Cross. Radio Okapi informs the residents that the floods are the strongest in the Central Basin since 1997.

Raging flooding waters left 75 people without homes in Lufu-Toto in Bas-Congo Province, damaging roads and bridges on the way.

The rainfalls continue to batter the region and floods are likely to continue to wreak havoc across the affected areas.