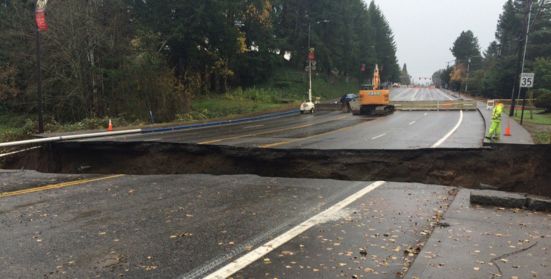 A large sinkhole swallowed a part of the road on Northeast Kane Drive in Gresham, Portland on December 8, 2015. The road collapsed and was split in half in an event which occurs roughly every 100 years, local media reports.

Abundant amounts of rainfall which set new records across Portland, Oregon over the last couple of days are responsible for the large sinkhole appearing on the street connecting Interstate 84 and Highway 26, daily used by about 30 000 vehicles. The Kane Drive is closed as of the afternoon of December 8 and forced the Mt. Hood Community College to remain shut down.

Currently, the city's contractors are assessing the damage, while the staff keeps an eye on the area as the forecast predicts another 50.8 to 76.2 mm (2 to 3 inches) of precipitation throughout December 9.

The sinkhole was thought to be caused by a 36.9 m (121 foot) long metal pipe under the road, which collapsed under the pressure of torrential downpours. According to some estimates the hole is about 4.5 m (15 feet) deep.

Look at this sinkhole in Gresham! Heavy rains caused the road to wash away. It's about 15 ft deep. #KOIN6News pic.twitter.com/W0eLpLVL5k

"It won't be a quick repair. It's going to be a longer-term discussion and we're not quite there yet with what specific repairs need to be done. At this point we're dealing with the immediate situation … and trying to prepare for the 3 inches that are coming later today," Elizabeth Coffey, a spokeswoman for the city stated.

The city is expected to provide an alternative route soon, as the Kane Drive is a main entry road for the college and one of the three primary corridors linking the I-84 and Highway 26.