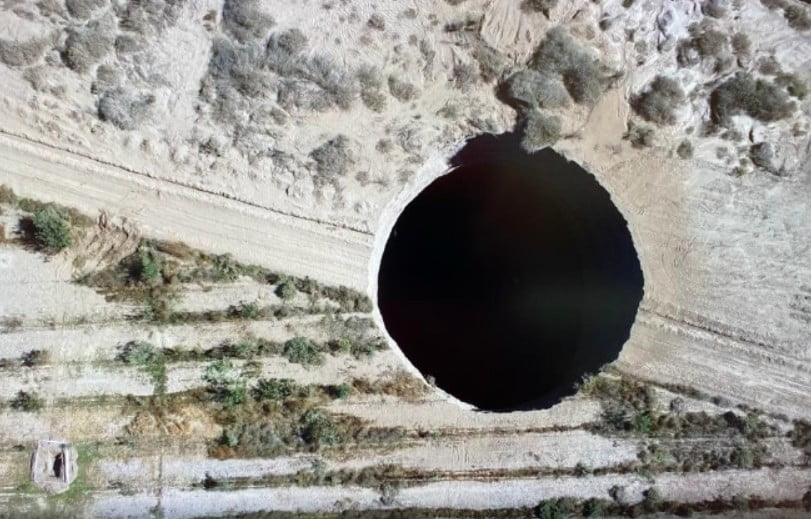 A massive sinkhole that formed in Chile’s Atacama region on July 30, 2022, ranks among the deepest sinkholes ever discovered. The sinkhole is located in the town of Tierra Amarilla, on land operated by a Canadian Lundin Mining copper mine, about 665 km (413 miles) north of Santiago.

On August 1, the Chilean National Geology and Mining Service (SERNAGEOMIN) said the sinkhole was 25 m (82 feet) wide but on August 2 it increased the diameter to 32 m (105 feet). According to the agency, the hole is around 200 m (625 feet) wide, making it one of the deepest known sinkholes in the world.

“There is a considerable distance, approximately 200 m (656 feet), to the bottom,” the agency’s director David Montenegro said in a statement. “We haven’t detected any material down there, but we have seen the presence of a lot of water.”1

At the moment, it’s not clear if the collapse is the result of mining activity or something else, but SERNAGEOMIN has launched an official investigation and suspended all activities in the mine on August 6.

The first investigations indicate that it could be the collapse of a mansion or cavern that appears once all the mineral is extracted.

In this context, the owner of the mine assured that “it will continue working with the authorities in order to determine the cause of the sinkhole to guarantee the peace of mind of the community [Tierra Amarilla].”2

The crater appeared on a hill located in one of the seven most important mining operations that were then in Tierra Amarilla, and also near a populated area, which led the neighbors to file a complaint.

Then, the person in charge of Minería de Atacama demanded that the company responsible for the mine immediately close the tunnel, located about 600 m (2 000 feet) from an inhabited area, and assured that it is “usual” for this type of incident to happen in large mines.2