Storm Christoph is forecast to bring widespread flooding and multiple hazards to parts of the United Kingdom and Ireland this week. A major incident has been declared in South Yorkshire as the combination of heavy rain and snowmelt led to a "volatile situation," said the Environment Agency.

Incessant heavy rains will result in significant accumulations of rain, which could lead to flooding, UK Met Office meteorologists said.

An Amber National Severe Weather warning is in place for portions of northern, central, and eastern England, while separate Yellow warnings are issued for Northern Ireland, Wales, southern Scotland, and the rest of England.

"Following a cold spell where the main hazard was snow, our focus now turns to notably heavy rain moving across the UK this week. Some locations could see over 100 mm (3.9 inches) of rain falling through the course just a couple of days with up to 200 mm (7.9 inches) possible over higher ground," stated chief meteorologist Dan Suri.

"These amounts of rainfall along with snowmelt present a real threat of flooding and people should keep a close eye on flood warnings from the Environment Agency and Natural Resources Wales."

Suri continued, "As the system moves away into the North Sea Wednesday night and Thursday morning there will be strong winds along the east coast for a time. Meanwhile, colder air coming southwards into the weather system brings the risk of further snow on the back edge of this system."

View from space of #StormChristoph moving in over the UK during the last 24hrs
Matt pic.twitter.com/JYRI7MvpeK

Aberllefenni in Wales has recorded 35.2mm since midnight

#TeamEA have been in #Billington today ahead of #StormChristoph deploying temporary #flood barriers to better protect the community from flooding.

Do you know your flood risk? Sign up for warnings here https://t.co/F1wbUHPZe8#PrepareActSurvive pic.twitter.com/wVMVE1n0B6

#StormChristoph continues to bring heavy rain across England. Stay safe at home – if you need to go outside, be alert to the hidden dangers of flood water and check your flood risk at: https://t.co/xNlgwQrrt9 #PrepareActSurvive pic.twitter.com/H7wc6P2CXd

There are #FloodWarnings in place as #StormChristoph brings heavy rain across England.

Know what to do in a flood and check your flood risk: https://t.co/MPz7Fwblnq #PrepareActSurvive pic.twitter.com/MaE7ptFod2

In South Yorkshire, a major incident was triggered ahead of strong winds, widespread flooding, and snowfall. The Environment Agency noted that the combination of heavy rain and snowmelt created a "volatile situation," and sandbags had to be placed in areas at risk.

"Much of the ground in parts of northern, central and eastern England is already saturated and the rainfall together with snowmelt is expected to bring the significant river and surface water flooding and could cause damage to buildings in some communities," said Katharine Smith, flood duty manager at the Environment Agency.

"Flooding could continue to affect parts of central, eastern and northern England into Friday, with localized flooding of land and roads a possibility elsewhere across much of country on Wednesday and Thursday."

Smith advised people to check flood risk in their area, sign up for free flood warnings via Gov.uk, and follow the Environment Agency's Twitter handle for the latest flood updates. 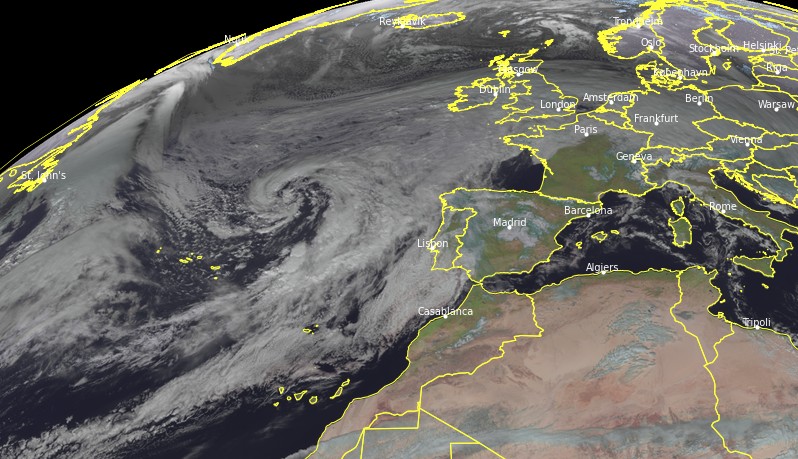