Tropical Cyclone "Eta" — blamed for the deaths of more than 170 people in Central America over the past few days — is expected to gradually re-strengthen on its approach to Cuba as it remains over warm waters and in a region of upper-level diffluence. Eta's center will approach the Cayman Islands later today, be near central Cuba tonight and Sunday, and near the Florida Keys or South Florida Sunday night and Monday, November 9.

However, by the time Eta reaches Cuba, the models show an increase in southwesterly wind shear and drier air being drawn into the circulation.

These factors should cause Eta to level off in strength, and likely become asymmetric, NHC forecaster Cangialosi noted on November 7.

When Eta interacts and merges with the upper low, it will likely take on a subtropical appearance and develop a large wind field near southern Florida.

The storm is forecast to slowly weaken when it passes to the west of Florida as it moves in a drier environment.

Based on the new forecast, the government of the Bahamas has issued a Tropical Storm Warning for the northwestern Bahamas. In addition, the Tropical Storm Watch along the east coast of Florida has been extended northward.

Heavy rainfall is now diminishing across portions of Central America, although the threat of life-threatening flooding may continue, along with landslides in areas of higher terrain.

Heavy rainfall from Eta will continue across the Cayman Islands and portions of Cuba, resulting in significant, life-threatening flash flooding and river flooding in Cuba. Flash and urban flooding will also be possible for the Cayman Islands, Jamaica, the Bahamas, and southern Florida.

Tropical storm conditions are expected later today and Sunday in portions of the Cayman Islands, Cuba, and the northwestern Bahamas, where a Tropical Storm Warning is in effect.

Tropical storm conditions are possible in the Florida Keys and portions of south and central Florida beginning late Sunday, where a Tropical Storm Watch is in effect. Tropical Storm Warnings could be required for these areas later today. 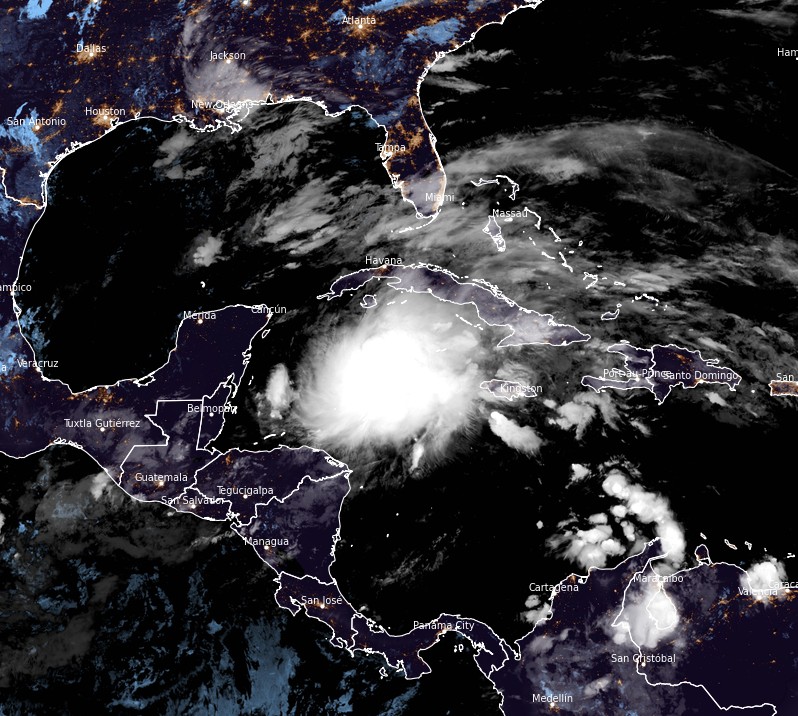 East-northeast to northeast motion at a faster forward speed is expected through early Sunday, November 8, followed by a turn toward the north and northwest by Sunday afternoon (EST).

On the forecast track, the center of Eta will approach the Cayman Islands later today, be near central Cuba tonight and Sunday, and near the Florida Keys or south Florida Sunday night and Monday, November 9. 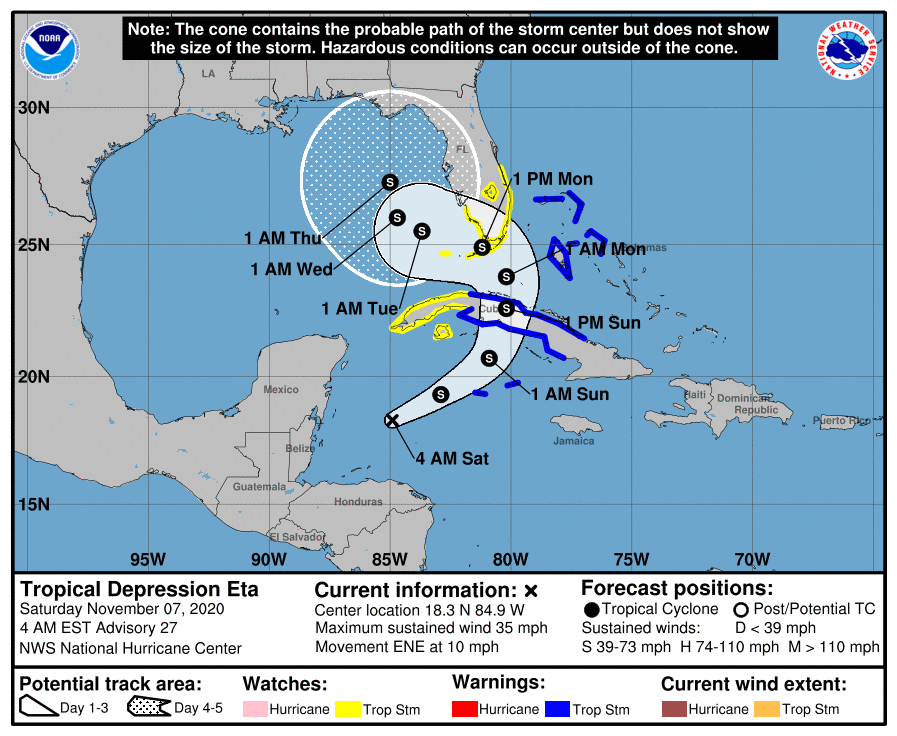 Swells generated by Eta are expected to spread northeastward and affect the Cayman Islands, Jamaica, the southern coast of Cuba, the northwestern Bahamas, and southern Florida and the Florida Keys during the next couple of days.

"Flooding is one of the greatest potential impacts from Eta. This risk should increase this weekend into early next week due to periods of heavy rainfall," NHC office in Miami said.

It weakened to a tropical depression after landfall but continued dumping very heavy rain, damaging homes, roads and bridges across the region.

In a press conference on Thursday, November 5, the President of Guatemala, Alejandro Giammattei, said a month's worth of rain had fallen on parts of the country in less than half a day.

On November 6, Giammattei said Eta is estimated to have claimed 150 lives in Guatemala alone. The number includes 100 people who went missing when 150 homes were buried under a landslide in the village of Queja near the city of San Cristobal Verapaz.

By November 7, Eta claimed at least 20 lives in other Central American countries, including 11 in Honduras, and 2 each in Nicaragua, Costa Rica, and Panama. At least 8 other people in Panama are missing.