The storm system will dump snow in the Rockies on Friday, March 27, while rain and thunderstorms expand eastward through the central Plains and the Ohio Valley, toward the Mid-Atlantic.

As the storm strengthens Friday night, a period of heavy snow accompanied by gusty winds may impact the central High Plains into the central Rockies on early Saturday, before the low-pressure system eventually heads toward the upper Midwest in the evening. 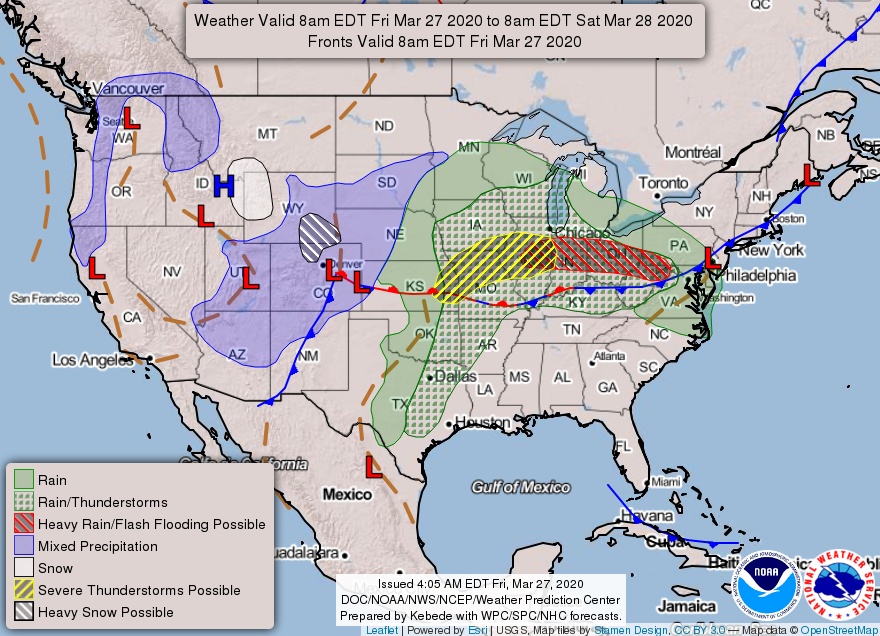 The severe weather threat may extend as far north as central Iowa and southern Wisconsin, and as far south as northeastern Texas and northwestern Louisiana. Among the areas at risk are Chicago, St. Louis, Davenport, Iowa, and Little Rock, Arkansas.

"Storms from northern Missouri and southern Iowa to central Illinois may have the greatest potential for tornadoes on Saturday, but this threat area may lift northward later in the day and early in the evening," said Knopick.

Yes, we have a flood threat this weekend, and even a marginal risk for severe weather today, but the real concern should be for tomorrow afternoon and evening. A major severe weather outbreak across Illinois will also give us a slight risk of storms. #ohwx pic.twitter.com/HM8PnRzhYd

A late-week storm will bring widespread rain and possible #severe weather to the Plains, Midwest and South: https://t.co/ymqv8IIKau pic.twitter.com/imhTWadi9d

AccuWeather meteorologists said some of the storms may even be capable of spawning powerful tornadoes. The situation may be hazardous as the outbreak peaks Saturday afternoon and evening, then strong tornadoes will be of the highest risk– twisters in Missouri, Iowa, and Illinois are likely to become fast-moving and strong.

"Farther south along the cold front, a more common threat is likely to be damaging winds and hail during Saturday," Knopick added as storms are predicted to move across Indiana, the western areas in Kentucky and Tennessee, southern Arkansas, and the northwestern portions of Mississippi and Louisianna by the evening.

"Some of the rain could change over to wet snow Saturday night across the upper Midwest before ending. South of the intensifying storm, showers, and thunderstorms ahead of a strong cold front are expected to move quickly across the southern Plains through Saturday, reaching the Mississippi Valley on Sunday," NWS wrote.

By Sunday, the severe weather will have fewer impacts and storms will be weaker, but locally severe storms are still possible from southeastern Michigan, southern Ontario and western New York state to northern Georgia, central Alabama and central Mississippi.

Close to 30 million people may be at risk for severe thunderstorms over the central United States as a volatile weather pattern unfolds into Saturday: https://t.co/DeQwR06ubs pic.twitter.com/eLGZSf0rmo