Tropical Storm "Pabuk" made landfall in the province of Nakhon Si Thammarat, southern Thailand at 05:45 UTC on January 4, 2019 (12:45 LT), with maximum sustained winds of 70 km/h (42 mph). Pabuk brought heavy rain and fears it could end up as the worst tropical cyclone to hit the region during peak holiday season since 1989. Thousands of people have left Koh Samui, Koh Tao and Koh Phangan islands ahead of the storm.

According to the Thai Meteorological Department, no previous tropical cyclone had struck Thailand in January, February or March in records dating to 1951.

Local media said officials are driving with trucks through flooded streets of Nakhon Si Thammarat urging anyone still there to leave.

"We can expect heavy rain and downpours, flooding and flash floods in the area through the night," the director general of the Thai meteorological department said. Pabuk is expected to affect the region for the next few days with widespread rainfall, and torrential downpours in much of the area, he said.

"People should beware of the severe conditions that cause forest runoffs and flash floods," authorities warned. 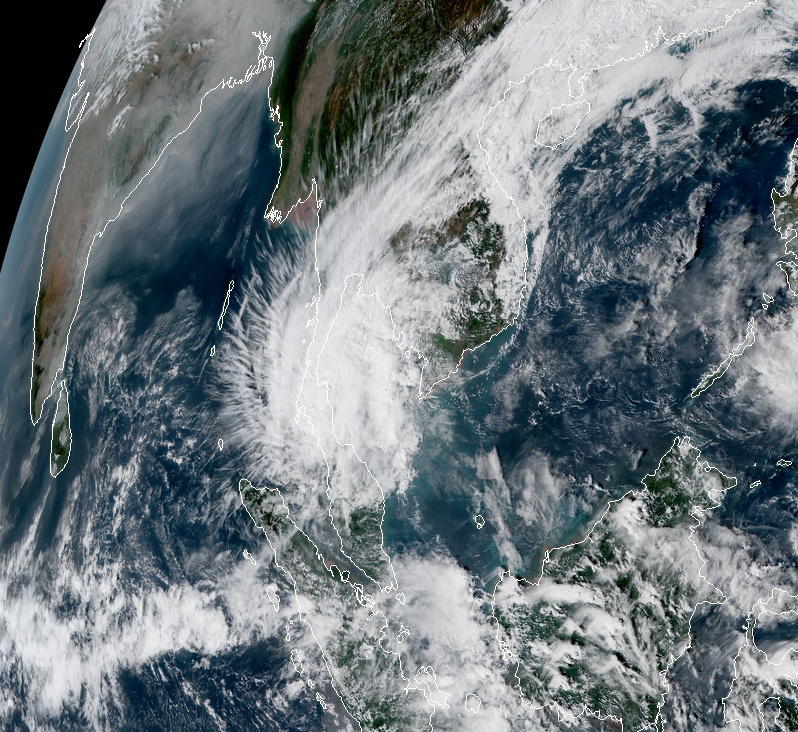 About 20 000 tourists were left stranded on Koh Samui due to the halted ferry service since Thursday night, January 3, according to Kittipop Roddon, chief of Koh Samui. About 15 000 and 4 000 tourists remained on Koh Tao and Koh Phangan respectively.

While torrential rain and strong winds were expected to affect more than a dozen other provinces, Nakon Si Thammarat and Surat Thani, home to the tourist islands of Koh Samui, Koh Tao and Koh Phangan, are expected to be hardest hit.

Disaster mitigation officials said one person was killed from the crew of a fishing boat that capsized in strong winds near the coast of Pattani province; another crew member is still missing. A third known casualty is a Russian man who drowned off Koh Samui on Wednesday, January 2.

Tourists stranded on Koh Samui have told the BBC the island is seeing heavy rain, wind and waves and there have been short power outages. People also say they have been advised to stay indoors after 16:00 local time until Saturday morning, January 5.

While storms are common in the Gulf of Thailand at this time of year, Pabuk is thought to be the worst in decades to hit during the peak holiday season, BBC said.

In the past, tropical storms have killed hundreds of people but authorities say they are well prepared and able to cope with the expected storm surges of up to five meters. The last big storm, Typhoon "Gay," struck in 1989 killing more than 800 people. In 1962, a tropical cyclone hit southern Thailand, killing more than 900 people.

According to the Thai Meteorological Department, no previous tropical cyclone had struck Thailand in January, February or March in records dating to 1951.