A new major explosion took place at Stromboli volcano on August 18. An intense explosion at 19:08 UTC  involved the mouths of the south-central zone located on the crater terrace, producing a small cloud of ash and the ejection of coarse pyroclastic material, which fell mainly on the crater terrace and on top of the Sciara del Fuoco.

The seismic signal associated with the event lasted a little over 4 minutes. Subsequently, the volcano returned to its normal Strombolian activity.

A tornado ripped through eastern Oklahoma, touching down southwest of Chouteau on August 19.

Several buildings were damaged by the tornado, in the town of Inola damage was reported at Moore’s Fish Farm, Unrau Meat Processing and Eden Mennonite Church.

A 47-day streak of no rain ended in the Missoula area on August 20. This is the longest spell without measurable rain since record-keeping began in 1948, according to the National Weather Service.

5 people were killed and 9 injured on August 20 as huge boulders and debris suddenly came down from a hillock, trapping a mini-bus and a car plying of the Doda-Kishtwar road. Authorities said four people died on the spot and another succumbed to injuries in hospital.

At least 10 people were killed in southern Italy's Calabria on August 20, after heavy rain flooded the Raganello Gorge filled with hikers. 12 other people were rescued and brought to safety.

It is still unclear how many people are missing but authorities said at least three groups of hikers were in the 12 km (7.1 miles) long gorge.

Indian state of Kerala received 42% excess rainfall during the 2018 monsoon season with a 164% more rainfall than average for the month of August, causing devastating floods, flash floods and landslides. 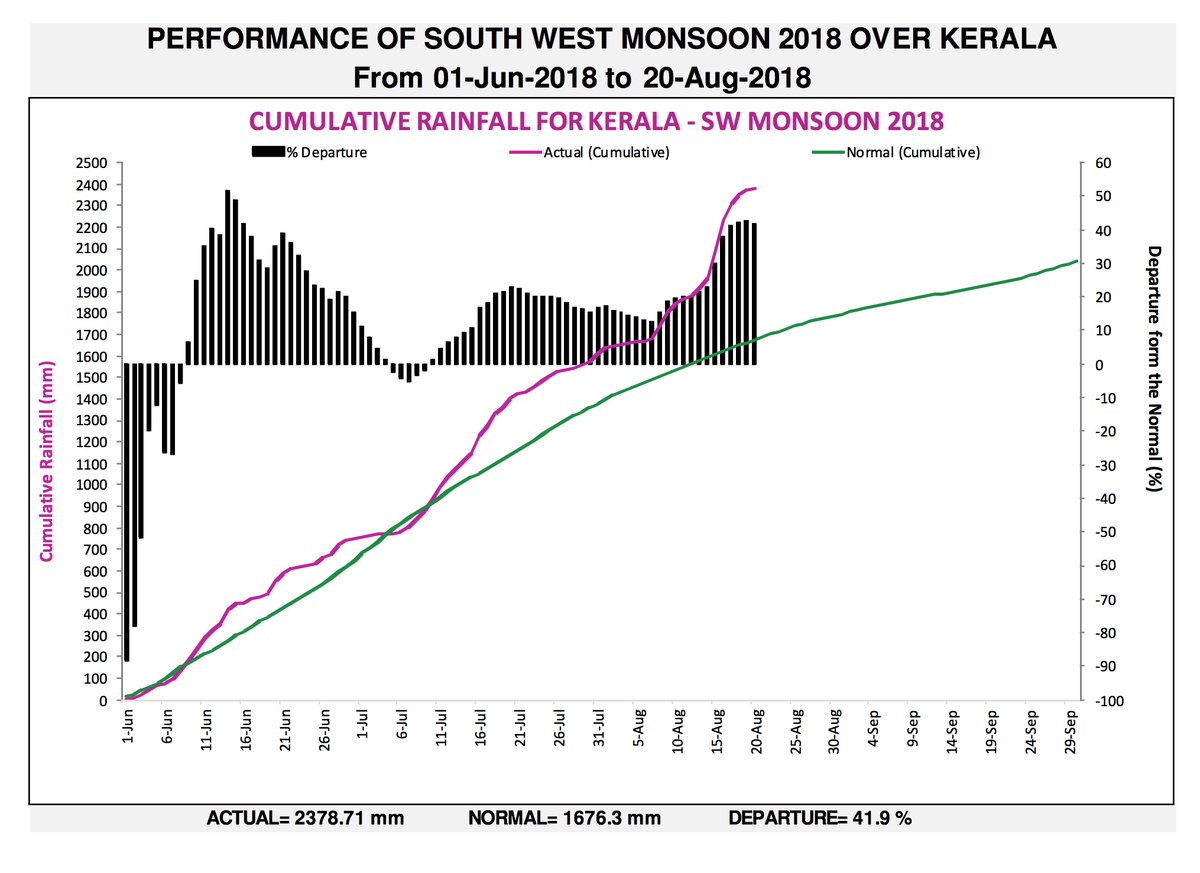 More than 50 cows, sheep and horses have died in France's most serious outbreak of anthrax in 20 years. Officials said the infection has spread to 28 farms since June.

The last serious French outbreak was in 2008 when anthrax spread to 23 farms, most of them in the eastern Doubs area.

Nearly 2 million acres on fire in the United States

The West Coast of the United States is shrouded in smoke from the 110 large fires (this does not include smaller fires within each complex of fires) that have erupted across the region during this fire season.

Over 768 900 ha (1.9 million acres) are or have been ablaze. Six new large fires were reported in Idaho, Nevada and Oregon over the weekend and eight large fires have been contained including the Ferguson Fire near Yosemite National Park in California.

This map comes from NOAA and is an experimental model showing both upper level or near-surface smoke. This particular iteration of the map is showing the near-surface smoke (expressed in μg/m3) from the HRRR-Smoke Model. Credit: NOAA

ASU professor Laurence Garvie, curator of the university’s Center for Meteorite Studies confirmed a stone found in a yard after July 27th Arizona fireball was an 85 grams ordinary chondrite – the 5th witnessed fall meteorite in Arizona. The meteorite was found on August 14 and later sold to a Prescott collector.

Even though the AMS only received 12 reports about this event, the meteorite has been found less than 8 km (5 miles) away from the end of the estimated trajectory computed only based on the witness reports.

Considering the first stone was found in a dense residential neighborhood everyone on this side of Phoenix should be checking their backyards for meteorites, AMS said.

A team of scientists, led by Shuai Li of the University of Hawaii and Brown University, used data from NASA’s Moon Mineralogy Mapper (M3) instrument aboard the Chandrayaan-1 spacecraft to identify three specific signatures that definitively prove there is water ice at the surface of the Moon.

At the southern pole, most of the ice is concentrated at lunar craters, while the northern pole’s ice is more widely, but sparsely spread.

Most of the newfound water ice lies in the shadows of craters near the poles, where the warmest temperatures never reach above -156 °C (-250 °F). Because of the very small tilt of the Moon’s rotation axis, sunlight never reaches these regions.

Previous observations indirectly found possible signs of surface ice at the lunar south pole, but these could have been explained by other phenomena, such as unusually reflective lunar soil.

The lull in activity at Kīlauea Volcano continues. HVO lowered the Alert Level for ground-based hazards from WARNING to WATCH, on August 17, but the Aviation Color Code remains at Orange. The summit has been quiet since the last collapse event on August 2.

However, the change does not mean with absolute certainty that the LERZ eruption or summit collapses are over. It remains possible that eruption and collapse activity could resume.

Sulfur dioxide emission rates at both the summit and LERZ are drastically reduced. The combined rate is lower than at any time since late 2007.

The Hawaii Volcanoes National Park has been closed for 102 days, as of August 20, due to unsafe conditions from seismic and explosive activity from the summit of Kilauea and there’s still no decision when the park will fully reopen as the roads are impassable due to sinkholes and cracks, and water lines broken by earthquakes.

At least 12 people have been killed and over 4 300 rescued in Karnataka's district of Kodagu, on the border with Kerala, since August 15, 2018. Heavy rains started affecting the region on August 14 and intensified on August 15, forcing authorities to issue heavy rainfall warning for the districts of Kodagu, Dakshina Kannada, Hassan, Chikkamagaluru and Shivamogga.

A large waterspout formed in the Bay of Plenty, New Zealand on August 20, 2018, and hit the Ohope Beach just after 17:30 NZST, damaging at least six properties. Ohope is 6 km (3.7 miles) east of Whakatane, North Island. At the same time, on the other side of North Island, another damaging tornado hit New Plymouth.

One of Ohope residents said he saw a massive waterspout come out of nowhere. "We all ran downstairs and hid in the bathroom," he told 1 NEWS. "I've never seen anything like that in my life."

A Very Strong Typhoon "Soulik" is approaching southern Japan and is expected to cause strong winds and drop heavy rain in southern and western parts of the country. According to the JMA, it will pass very close to Kyushu and the Amami islands on the evening of August 21. The typhoon will start weakening over the next 36 hours and approach the Korean Peninsula with maximum sustained winds of 140 km/h (86 mph) on August 22.

As of 15:00 CDT on August 20, the Eppley Airfield in Omaha, Nebraska received 156.2 mm (6.15 inches) of rain, making it the fourth-wettest day in the city since record-keeping began in 1887. The city's wettest day on record was August 7, 1999, with 164 mm (6.46 inches). he storm caused widespread flash flooding and contributed to 'higher-than-normal' number of crashes in Omaha metro area, causing police to suspend responses to minor crashes.

Brazilian and North American meteorologists both agreed it was snow that was seen falling in parts of Uruguay on Sunday, August 19, 2018. Since Uruguay is located within the temperate zone of the tropic of Capricorn, the country has warm summers and crisp winters with almost unknown freezing temperatures.