France has seen exceptionally high rainfall this month with several places already above all-time record and others 4 – 5 times above average for the month. With 7 days still left, the December – January period in Paris is already the second-wettest on record since data started being collected in 1900, according to data provided by Meteo France.

Many homes were already flooded and traffic disrupted this month as 4 named storms swept the country since January 1 – Carmen, Eleanor, Fionn, and David. Snow was also exceptional in the Northern Alps with up to 2 meters (6.5 feet) in Haute-Savoie.

Since the beginning of meteorological winter (December 1), the jet stream was positioned further south than usual, which explains numerous winter storms, December's Ana and Bruno in addition to above-mentioned January storms.

Rapid westerly wind patterns have resulted in excess precipitation over most areas except locally in areas sheltered by the Mediterranean rim. The cumulative rainfall from December 1 to January 21, reached values double than normal.

Some exposed areas have already broken all-time records for this period. Savoy, for example, recorded 428 mm (16.8 inches) in Chambéry while Bourg-Saint-Maurice saw 544 mm (21.4 inches), amounts never seen before in this period. The previous record was 491 mm (19.3 inches) recorded in 1954/55.

The 544 mm this region saw represents the average annual rainfall of cities like Perpignan or Marseille. 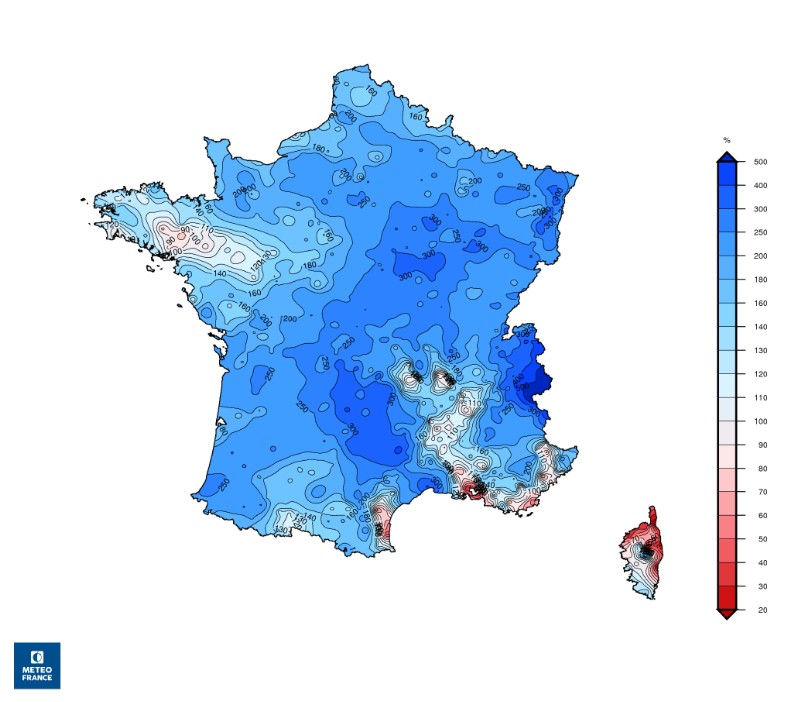 This abundant rainfall has been characterized by remarkable amounts of snow in the country's mountainous region, mainly in the northern Alps where Aiguilles Rouges ski resort at an elevation of 2 365 m (7 759 feet) measured 378 cm (12.4 feet) of snow during early morning hours of January 22. This value is close to record 421 cm (13.8 feet) measured in 1987/88. 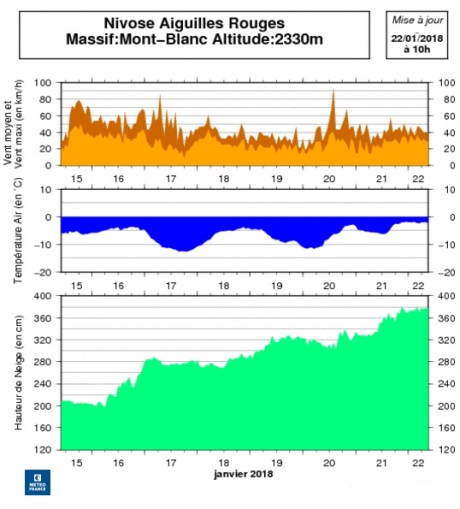 Evolution of wind, snow, and temperature at Aiguilles Rouges from January 1 to 21, 2018. Credit: Meteo France

Although the forecast for this week is generally more optimistic, with drier and calmer weather (except on Thursday and Friday), many rivers across northern France are rising and several have already burst their banks. Loue River reached 2.58 m (8.4 feet) on January 22, the second highest level since 3.2 m (10.4 feet) in 1953, flooding streets and homes in the town of Ornans in Doubs department.

While Loue has reached its peak, River Seine is still rising and has already burst its banks on several places in capital Paris.

The peak is expected on Saturday, January 27 at 6.2 m (20.3 feet) – 5 to 6 times more than normal – and authorities have already suspended river traffic, closed several roads and 7 stations of city's train line.

Levels expected on Saturday are expected to break the 6.1 m (20 feet) mark recorded in May and June 2016 during massive floods in which 4 people died and material damage reached up to 1.4 billion euros.

The OECD said that action to prevent major river flooding in Paris and the Ile de France region has improved over the past 4 years but Paris still hasn't resolved all its challenges.

During a crisis meeting with Paris police officials, mayor Anne Hidalgo said the situation is serious but not catastrophic.

Orange flood alerts are in effect across 15 departments today and tomorrow. 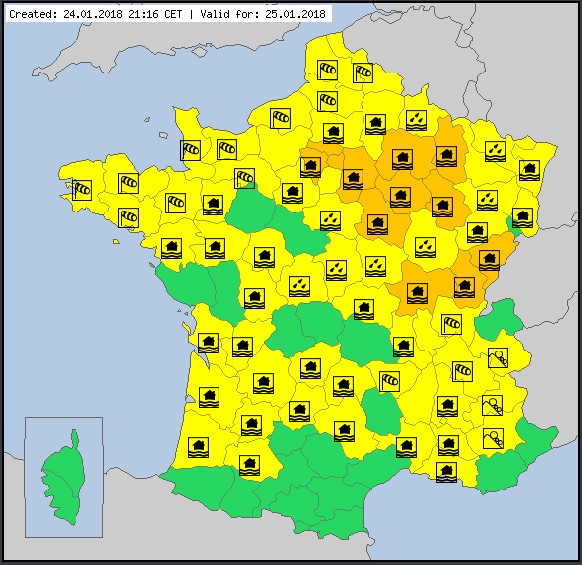 Extensive flooding is possible as dikes may be weakened or overwhelmed, road and railway traffic could be disrupted and power outages may occur in all 15 departments, Meteo France warns.

Be informed if you are traveling and take extra care on the roads and near rivers. Follow indicated alternative routes and do not, in any case, walk or drive through floodwaters. Population living in flood-prone areas should secure their belongings and watch for rising waters.