"I have never seen a rainbow during the winter and I didn't even know that it is possible for them to form when the temperature is below 0 °C [32 °F]," says Valtteri Immonen who took the photograph below. "It was -6 °C [21.2 °F], no rain and no snowfall. Yet there was a huge rainbow across the sky," Immonen said. 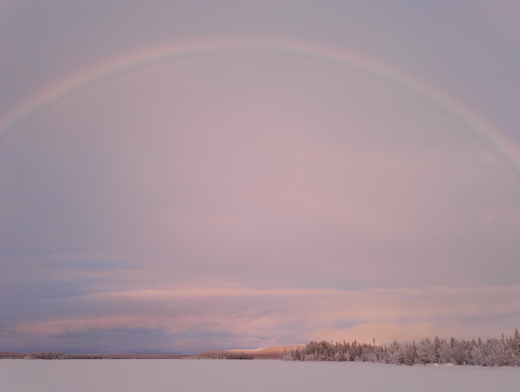 "The rainbow's appearance, narrow with a supernumerary, says that it was produced with reasonable size water drops, perhaps about 0.5 mm in diameter. I surmise that the there was high-level precipitation that did not necessarily reach the ground. The drops could also have been supercooled below the normal freezing point of water," Atmospheric optics expert Les Cowley told Spaceweather.com.

Supercooled raindrops can form when droplets of liquid waterfall through layers of subfreezing air, Dr. Tony Phillips of Spaceweather.com explains. Droplets containing specks of dust or even microbes readily freeze as ice crystals form around the impurities. But when rain droplets are especially pure, they can remain in a liquid state even when the temperature drops below freezing.

"Immonen's photo suggests that more of these rare rainbows may be in the offing," he concluded.