With a magnitude of 7.3, the November 12, 2017 earthquake that shook the border region between Iran and Iraq is among the largest ever recorded in this area. Seismologists know it resulted from the pressure built up between the colliding Arabian and Eurasian plates of the Earth's crust. But there's still a lot for researchers to uncover about seismic activity in the region.

Originally from Iran, I'm a seismologist who studies earthquakes, tsunamis and landslides. I've been thinking a lot about potential seismic activity and the consequent hazard in this area. My earth sciences colleagues have been examining these faults for years in order to better understand the fault systems in the region. However, the Earth sometimes surprises us, and this time the rupture did not happen on a previously known major fault.

Our lack of knowledge about the specific fault causing this earthquake is mainly because seismologists know only about faults that have already caused earthquakes. Only after new earthquakes can we update our fault maps to be more complete. It's learning from past earthquakes that lets us better understand and prepare for future seismic hazards.

The outer rigid surface of the Earth is divided into chunks known as tectonic plates. These plates move around at the rate of a few centimeters per year – by coincidence, the same rate at which your fingernails grow. The Arabian Peninsula and Iran are on separate adjacent plates in this region.

The mostly northward continental collision between the Arabian plate and Eurasia (which includes Iran) has created the Zagros mountains as the plates crash together in slow motion. Collision energy is also released in the form of earthquakes at fault lines along or close to these boundaries. Many researchers are studying what portions of this region's collision energy are spent building mountains versus causing earthquakes.

Seismologists do know the Zagros mountains host many active fault lines, and the tectonic wiggles on these faults cause a significant number of earthquakes in Iran and Iraq. In fact, about 25 000 earthquakes have been recorded in the Zagros mountains over just the past 11 years. Although these earthquakes are usually small in size, the data show that every now and then moderate to large events also occur; these can result in significant destruction. 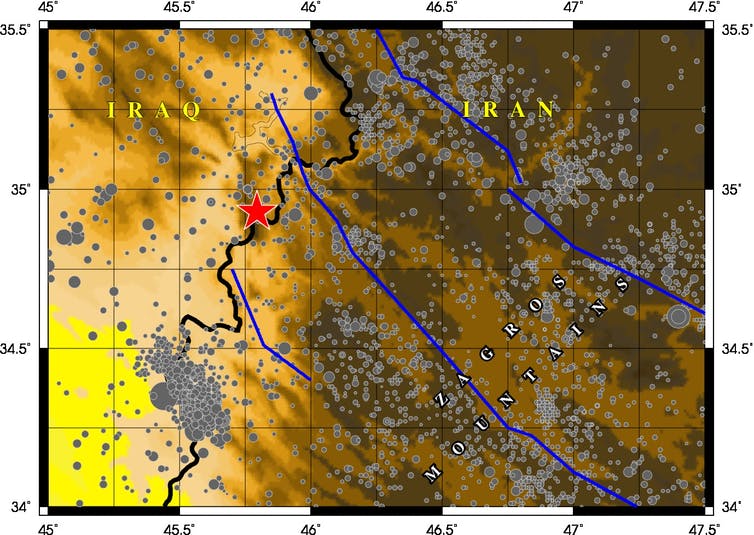 Recorded earthquakes in the region are marked with gray circles. Major fault lines are in blue, with the Nov. 12 epicenter marked by a star. Credit: Amir Salaree, CC BY-ND

The main fault responsible for the November 12 earthquake has yet to be identified. As located by the Iranian Seismological Center, the quake took place in a zone between two major known faults: the High Zagros Fault and the Mountain Front Fault.

One good thing that comes from a big earthquake is more data about the structure of tectonic plates and therefore the seismic potential in the area. Researchers and planners can, in turn, use this information to prepare for future events. As the saying goes, we cannot predict earthquakes, but we can anticipate them.

What was different about this quake

Large earthquakes in Iran have typically caused a high number of fatalities. The 1990 Rudbar (magnitude 7.4) and 2003 Bam (magnitude 6.6) earthquakes resulted in a total of around 55 000 deaths and as much as US$9 billion of economic loss.

According to the Iranian state-run news agency, the November 12 earthquake killed over 500 people, as of this publication, with thousands injured, mostly on the Iranian side of the border. Registering a magnitude of 7.3, the quake was comparable in size to its 1990 and 2003 counterparts, but produced a relatively low number of casualties. This was due to several important factors. 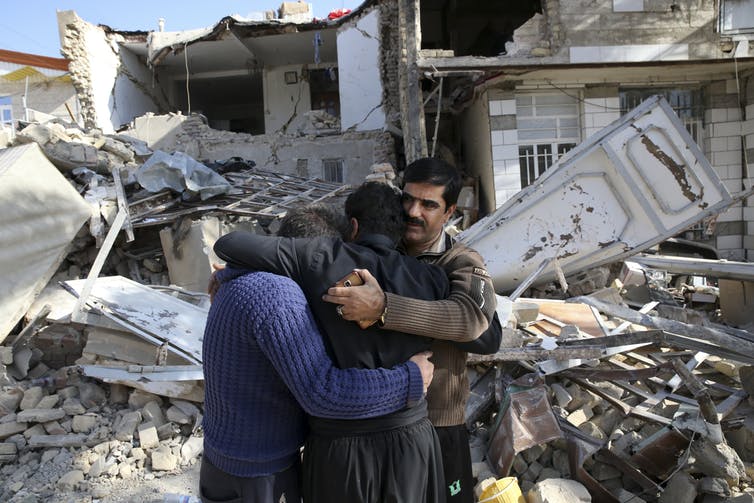 Even with a smaller death toll, thousands were left homeless, in need of aid and mourning those who were killed.  Credit: AP Photo/Vahid Salemi

First, this latest earthquake was preceded by a much smaller magnitude 4.4 foreshock – a relatively smaller earthquake that precedes the largest earthquake in a series. The foreshock caused many people to leave their homes and, in effect, escape the subsequent destruction. As a seismologist would tell you, earthquakes don't kill people; buildings do.

Secondly, it occurred on much more rigid ground cover – mostly rocks instead of thick layers of unconsolidated soil compared to the other two events. These geological conditions mean the seismic waves from the earthquake were less amplified, and so less shaking was observed on the surface.

Also, following the previous recent destructive earthquakes in Iran, the Iranian government passed new construction regulations for more earthquake-safe buildings, calling for such things as concrete and steel frames and detailed study of the base soil prior to the construction. Considering the alarming foreshock, the smaller population in the affected towns (compared to the former two destructive earthquakes) and the unknown extent of enforcement of the building codes, it is difficult to estimate how the number of casualties would have increased in the absence of these laws.

For a more complete picture of this earthquake, we still need more data that are yet to be collected and documented both from field surveys and the study of seismic waves recorded by seismometers throughout the world. Seismologists are looking for further evidence about the propagation of the earthquake rupture to learn more about the internal characteristics of the fault as well as the properties of the convergence between the Arabian and Eurasian plates. They'll also use seismic waves recorded from this earthquake to image the structure of Earth's crust in the region – just like an ultrasound that provides a picture of your internal organs.

The aftermath of a seismic event like this one is an excellent opportunity to evaluate our understanding of earthquakes and their hazards in Iran and Iraq as well as elsewhere around the world.