Another powerful eruption occurred at Bogoslof volcano, Alaska at 20:48 UTC on July 2, 2017.

The latest eruption lasted 16 minutes and sent a cloud of ash up to 11 km (36 000 feet) that was carried easterly over northern Unalaska.

The Aviation Color Code remains at RED and the Alert Level remains at WARNING, the Alaska Volcano Observatory said 01:17 UTC, July 3. Additional ash-producing eruptions could occur at any time with no detectable precursors, AVO warns. 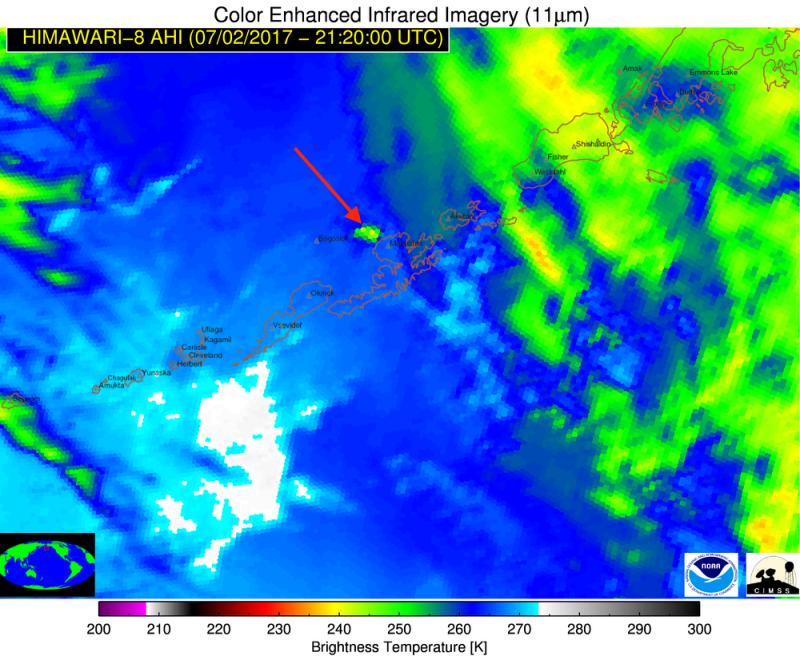 HIMAWARI-8 thermal infrared satellite image collected on July 2, 2017 at 21:20 UTC (13:20 AKDT) of the volcanic cloud (red arrow) produced by the eruption of Bogoslof volcano. The explosive eruption began about 20 minutes prior to this image, and by this time the volcanic cloud had moved towards the east. A pilot report suggested that the cloud may have reached an altitude of 11 km (36 000 feet) above sea level. The color scheme shows the temperature of the clouds in degrees Kelvin (Degrees Celsius+273). High clouds are cold (green-yellow-orange) and lower clouds are warm (blue-white).