Although Vanuatu's Ambae volcano, also known as Manaro Voui and Aoba, made international headlines in 2017 after more than 13 000 people living around it had to be evacuated, experts are now bringing our attention to April 5, 2018 eruption which was 'missed by the media, and pretty much everyone' because it took place at night.

Klemetti pointed out to a tweet posted by Dr. Simon Carn, an Associate Professor at the Department of Geological and Mining Engineering and Sciences Michigan Technological University, that said the eruption on April 5 may have emitted the most sulfur dioxide of any eruption since the 2015 eruption at Calbuco in Chile.

By April 8, the sulfur dioxide plume from the eruption reached from near the eastern coast of Australia to Tahiti.

Change in wind direction caused by the tropical low that was located east of Maewo island over the last few days caused heavy ash fall from Ambae volcano on Maewo on April 8 – 10, 2018. The winds blowing from west to southwest caused the ash fall in nearly all the islands of the north.

In VMGD's volcano alert bulletin issued April 4, the agency said that the volcanic eruption at Ambae confined inside the Lake Voui is stable at Alert Level 3. The restricted area of risk is limited to the area of 3 km (1.86 miles) from the active vent and areas located in the Yellow Zone. 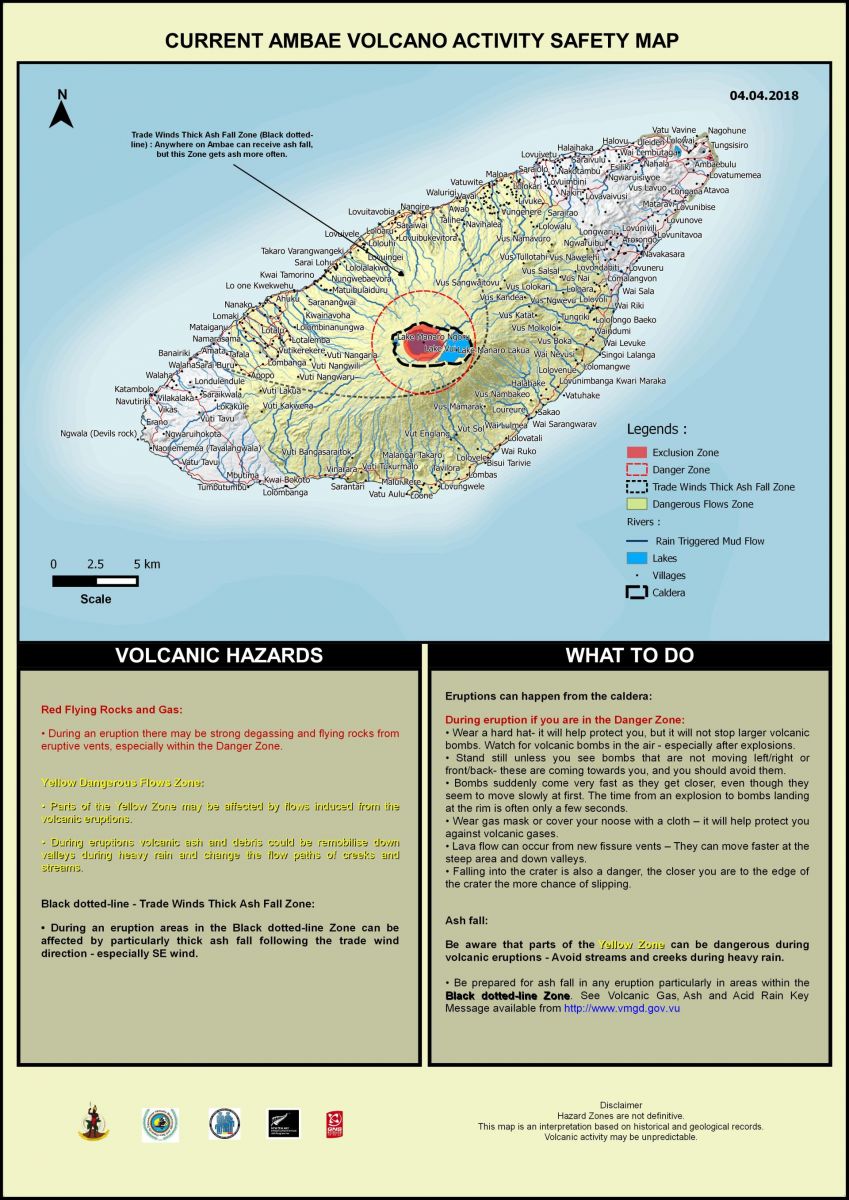 Ambae volcano remains at the Alert Level 3 with sustained volcanic ashes/gases, VMGD said April 11. Villages from East to South East of Ambae island can continue expecting ash falls and gasses from the volcano. In addition, acid rain may occur during rainfall, the agency said, urging residents to avoid creeks and streams.

Ambae volcano is a very large volcano and is frequently active. In the recorded history, there have been many eruptions, every 10-50 years over the past 150 years. All have been from the summit craters, except one recorded in 1670’s when a lava flow occurred in the Ndui Ndui area. The current eruption is focused in the summit crater and there are no indications of activity elsewhere on Ambae Island.