Researchers using NASA satellites to detect fires and burn scars from space have found that an ongoing transition from nomadic cultures to settled lifestyles and intensifying agriculture has led to a steep drop in the use of fire for land clearing and an overall drop in natural and human-caused fires worldwide.

Globally, the total acreage burned by fires declined 24% between 1998 and 2015, according to a new paper published in Science. Scientists determined that the decline in burned area was greatest in savannas and grasslands, where fires are essential for maintaining healthy ecosystems and habitat conservation. 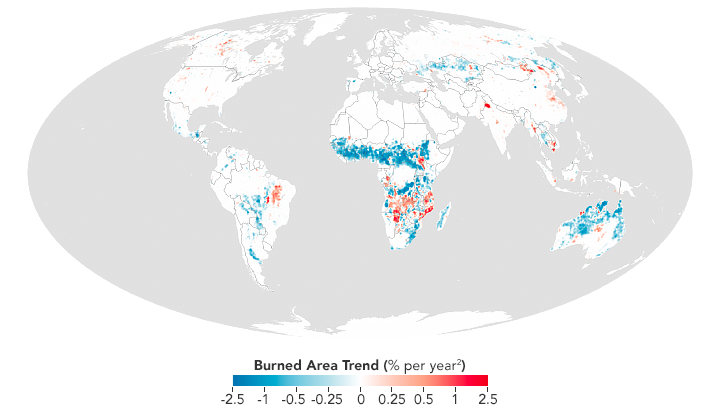 The map above, based on data from the international research team, shows annual trends in burned area over the study period. Blues represent areas where the trend was toward less burning, whether natural or human-caused, while red areas had more burning. The line plot shows the annual fluctuations in global burned area and the overall downward trend. The research team, led by Niels Andela of NASA’s Goddard Space Flight Center, analyzed fire data derived from the Moderate Resolution Imaging Spectrometer (MODIS) instruments on NASA’s Terra and Aqua satellites. They then compared these data sets with regional and global trends in agriculture and socio-economic development.

Across Africa, fires collectively burned an area about half the size of the continental United States every year. In traditional savanna cultures, people often set fires to keep grazing lands productive and free of shrubs and trees. But as many of these communities have shifted to cultivating permanent fields and building more houses, roads, and villages, the use of fire has declined. As this economic development continues, the landscape becomes more fragmented and communities then enact legislation to control fires. This leads the burned area to decline even more.

By 2015, savanna fires in Africa had declined by 700 000 km2 (270 000 mi2). “When land use intensifies on savannas, fire is used less and less as a tool,” Andela said. “As soon as people invest in houses, crops, and livestock, they don’t want these fires close by anymore. The way of doing agriculture changes, the practices change, and fire disappears from the grassland landscape.”

A slightly different pattern occurs in tropical forests and other humid regions near the equator. Fire rarely occurs naturally in these forests; but as humans settle an area, they often use fire to clear land for cropland and pastures. As more people move into these areas and increase the investments in agriculture, they set fewer fires and the burned area declines again. 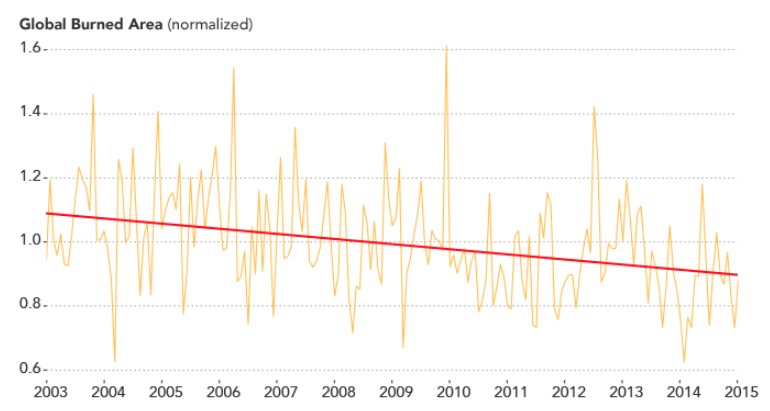 The changes in savanna, grassland, and tropical forest fire patterns are so large that they have so far offset some of the increased risk of fire caused by global warming, said Doug Morton, a forest scientist at NASA Goddard and a co-author of the study. The impact of a warming and drying climate is more obvious at higher latitudes, where fire has increased in Canada and the American West. Regions of China, India, Brazil, and southern Africa also showed increases in burned area.

“Climate change has increased fire risk in many regions, but satellite burned area data show that human activity has effectively counterbalanced that climate risk, especially across the global tropics,” Morton said. “We’ve seen a substantial global decline over the satellite record, and the loss of fire has some really important implications for the Earth system.”

Fewer and smaller fires on the savanna mean that there are more trees and shrubs instead of open grasslands. This is a significant change in habitat for the region’s iconic mammals like elephants, rhinoceroses, and lions. “Humans are interrupting the ancient, natural cycle of burning and regrowth in these areas,” said senior author Jim Randerson of the University of California, Irvine. “Fire had been instrumental for millennia in maintaining healthy savannas, keeping shrubs and trees at bay and eliminating dead vegetation.”

There are benefits to fewer fires as well. Regions with less fire saw a decrease in carbon monoxide emissions and an improvement in air quality during fire season. With less fire, savanna vegetation is increasing—taking up more carbon dioxide from the atmosphere.

But the decline in burned area from human activity raises some tricky questions. “For fire-dependent ecosystems like savannas,” Morton said, “the challenge is to balance the need for frequent burning to maintain habitat for large mammals and to maintain biodiversity while protecting people’s property, air quality, and agriculture.”