A massive storm is affecting the western United States, dropping heavy rain and causing floods, mudslides, and evacuations. Significant flooding is expected in parts of drought-stricken California and western Nevada. At least three people have lost their lives by Monday, January 9, 2017. A series of Pacific storm systems will continue to impact the region through midweek, NWS warned, bringing periods of rain and snow, some of which could be heavy, to many areas.

The storm, stretching all the way from Hawaii, has prompted the evacuation of hundreds of homes in northern Nevada and triggered flooding and mudslides that blocked major highways and stranded motorists in Northern California on Sunday, January 8, 2017.

A wind gust of 278 km/h (173 mph) was measured in the Sierras. A state of emergency has been declared in Nevada.

The Truckee River breached its banks in south Reno on Sunday, January 8, prompting the evacuation of at least 400 homes, some 1 300 people. The river was expected to peak about 1.8 m (6 feet) above flood stage Monday morning in neighboring Sparks, where several feet of water is expected to flood an industrial area where 25 000 people work, The Weather Channel reported.

This is a serious flood situation," the National Weather Service said in a special flood statement late Sunday. Flood warnings continue along much of the Sierra's eastern front and western Nevada into Tuesday. The Russian River in California's Sonoma County has also breached its banks, prompting the closure of area schools.

Authorities were also watching rising water levels of Cosumnes, Merced and American. All roads leading to Yosemite National Park's valley floor remain closed amid fears that the Merced river could overflow and cause major flooding.

Multiple vehicles now stuck on Henness Pass Rd. above Dog Valley. This is not a safe I80 alternative, do not blindly follow GPS! #nvflood17 pic.twitter.com/BvAFM3qS2f

Motorists were left stranded Sunday on flooded roads as heavy rains from the massive winter storm moved into Northern California. Rescues were performed in Marin and Sonoma counties, including a rescue along U.S. 101, where several people were saved from submerged vehicles.

There have also been widespread avalanches on Carson Pass and the Sacramento Weir gates will open Monday for first time since 2006 to alleviate the flood waters in the Yolo Bypass, according to KCRA.

Three people have died in California where flooding rains have shut down roadways and created hazardous travel conditions throughout the central portion of the state. Water rescues have been reported around the region.

More than 40 000 were without power in Bay Area on Sunday, the KRON reported.

Sadly, a well-known giant sequoia tree known for the huge tunnel carved through it that was once used by cars has toppled due the heavy rains in Calaveras Big Trees State Park in Calaveras County.

"For forecasters who've been here a decade or more, this is one of the most impressive atmospheric setups that we have seen in a long time for potential flooding in the region," said Chris Smallcomb, a National Weather Service meteorologist in Reno. "If you had to write a textbook on how to get a flood in the region, you would use a scenario just like this."

A series of Pacific storm systems will continue to impact the western US through midweek, NWS warned, bringing periods of rain and snow, some of which could be heavy, to many areas. 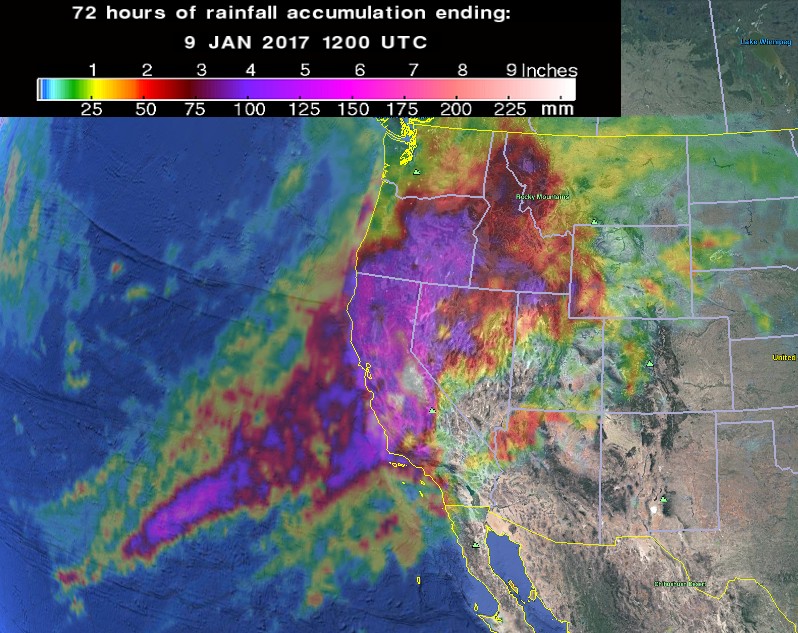 A cold front will move across the Great Basin and into the Rockies Monday, lowering snow levels and changing precipitation from rain back to snow by tonight at many lower elevation locations.

Snow will also be widespread at the higher elevations of the Rockies and the northern Intermountain region, as well as mountain ranges across the West Coast states. Heavy snow is possible for some of these areas.

At the lower elevations along the West Coast, rain will continue for many areas, some of which could be heavy and lead to areas of flooding or flash flooding.

Another potent Pacific low pressure system will approach the coast Tuesday afternoon and evening, bringing another round of potentially heavy precipitation.

Rising snow levels ahead of this system may once again change some mountain locations over to rain, before changing back to snow as the system moves inland Tuesday night and Wednesday.