In a very short period of time on September 29, 2016, a strong and slow-moving weather system dumped heavy rain on Detroit-Windsor region, international transborder agglomeration between the United States and Canada. Roads and houses were flooded in a matter of hours.

Authorities in Windsor and nearby Tecumseh, Ontario have declared states of emergency, after the area received 106 mm (4.17 inches) of rain in a very short time. In total, between 120 and 200 mm (4.72 – 7.87 inches) of rain was recorded in the region. Windsor officials said the city has received at least 700 reports of flooded basements.

There were reportedly 12 flood rescues, most of them drivers in their vehicles.

The NWS said this system will continue to funnel moisture into Southeast Michigan through Friday and multiple rounds of rain and thunderstorms, some heavy, may lead to flooding. An additional 25.4 to 76.2 mm (1 – 3 inches) of rain is expected through Friday evening, local time.

This upper level low, cut off from the jet stream, will slowly meander itself over the southern Great Lakes through Saturday before slowly departing on Sunday, October 2, said Weather Network meteorologist Erin Wenckstern. 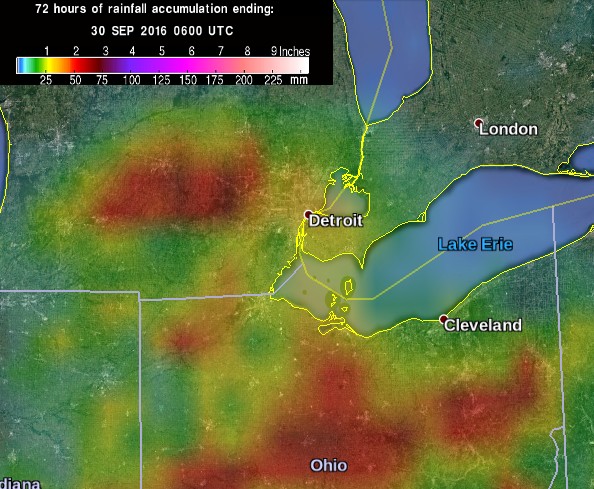 72 hours of rainfall accumulation over Detroit-Windsor region by 06:00 UTC on September 30, 2016. Credit: NASA/TRMM