Researchers from Boston University's (BU) Center for Space Physics report that Jupiter's Great Red Spot may provide the mysterious source of energy required to heat the planet's upper atmosphere to the unusually high values observed. The work, led by Dr James O'Donoghue of BU, was kick-started by a small travel grant (of just £500) from the Royal Astronomical Society back in 2012.

Sunlight reaching Earth efficiently heats the terrestrial atmosphere at altitudes well above the surface – even at 400 km (250 miles) high, for example, where the International Space Station orbits. Jupiter is over five times more distant from the Sun, and yet its upper atmosphere has temperatures, on average, comparable to those found at Earth. The sources of the non-solar energy responsible for this extra heating have remained elusive to scientists studying processes in the outer solar system.

"With solar heating from above ruled out, we designed observations to map the heat distribution over the entire planet in search for any temperature anomalies that might yield clues as to where the energy is coming from," explained O'Donoghue, a research scientist at BU.

Astronomers measure the temperature of a planet by observing the non-visible, infrared (IR) light it emits. The visible cloud tops we see at Jupiter are about 50 km (30 miles) above its rim; the IR emissions used by the BU team came from heights about 800 km (500 miles) higher. When the BU observers looked at their results, they found high altitude temperatures much larger than anticipated whenever their telescope looked at certain latitudes and longitudes in the planet's southern hemisphere.

"We could see almost immediately that our maximum temperatures at high altitudes were above the Great Red Spot far below – a weird coincidence or a major clue?" O'Donoghue added. 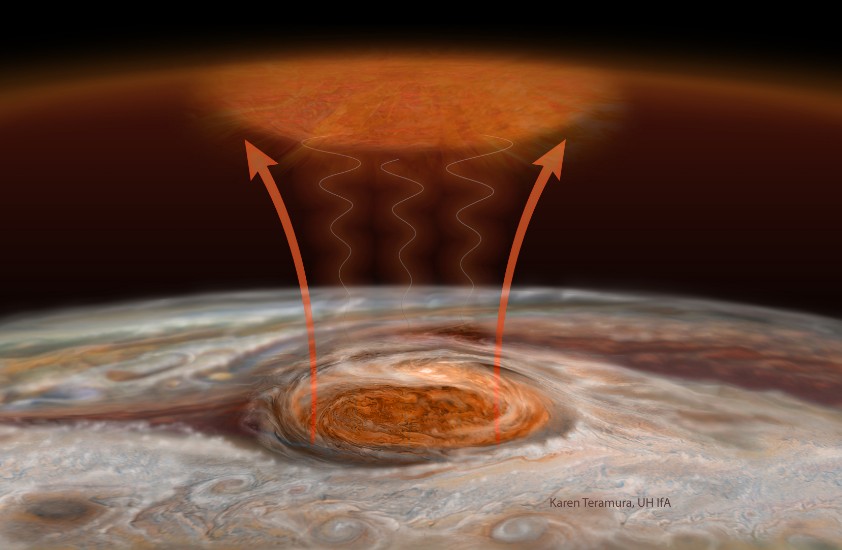 Artist’s concept of the mechanism of heating from the Great Red Spot. Turbulent atmospheric flows above the storm produce both gravity waves and acoustic waves. Gravity waves are much like how a guitar string moves when plucked, while acoustic waves are compressions of the air (sound waves). Heating in the upper atmosphere 500 miles above the storm is thought to be caused by a combination of these two wave types ‘crashing’ like ocean waves on a beach. Credit: Art by Karen Teramura, UH IfA, James O’Donoghue.

Jupiter's Great Red Spot (GRS) is one of the marvels of our solar system. Discovered within years of Galileo's introduction of telescopic astronomy in the 17th Century, its swirling pattern of colourful gases is often called a "perpetual hurricane." The GRS has varied is size and colour over the centuries, spans a distance equal to three earth-diameters, and has winds that take six days to complete one spin. Jupiter itself spins very quickly, completing one revolution in only ten hours.

"The Great Red Spot is a terrific source of energy to heat the upper atmosphere at Jupiter, but we had no prior evidence of its actual effects upon observed temperatures at high altitudes," explained Dr Luke Moore, a study co-author and research scientist in the Center for Space Physics at BU.

Solving an "energy crisis" on a distant planet has implications within our solar system, as well as for planets orbiting other stars. As the BU scientists point out, the unusually high temperatures far above Jupiter's visible disk is not a unique aspect of our solar system. The dilemma also occurs at Saturn, Uranus and Neptune, and probably for all giant exoplanets outside our solar system.

"Energy transfer to the upper atmosphere from below has been simulated for planetary atmospheres, but not yet backed up by observations," O'Donoghue said. "The extremely high temperatures observed above the storm appear to be the 'smoking gun' of this energy transfer, indicating that planet-wide heating is a plausible explanation for the 'energy crisis.' "

O'Donoghue cites the help of the Royal Astronomical Society, when he was a PhD student, as being crucial to starting the work. "A £500 travel grant from the RAS, at a time of very tight funding, made it possible for me to carry out the observations on the SpeX instrument, mounted on the NASA Infrared Telescope Facility on Hawaii. This modest support helped me start my career in astronomy, which has taken me to Boston, and seen me publish my work in the world's leading scientific journals." 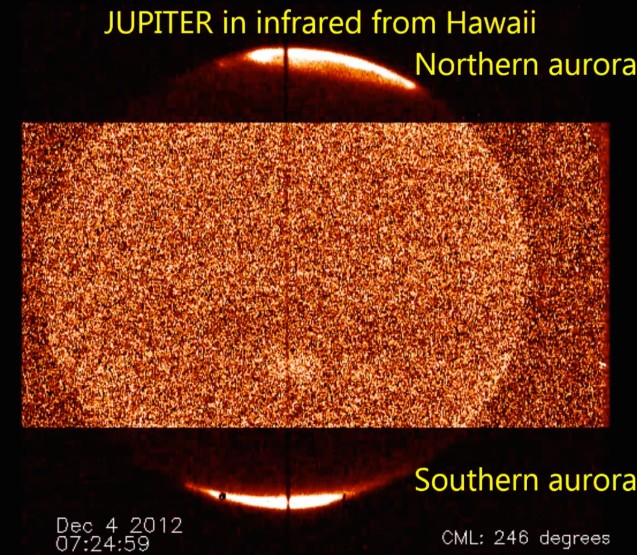 Jupiter from the NASA Infrared Telescope Facility and SpeX instrument. Bright regions at the poles result from auroral emissions; the contrast at low- and mid-latitudes has been enhanced for visibility. The red arrow indicates great Red Spot (GRS) emissions at mid-latitudes. Additional info: The vertical dark line in the middle of the image indicates the position of the spectrometer slit, which was aligned along the rotational axis of Jupiter. Image shown is taken from the slit (slit-jaw imaging) using the "L-filter" (3.13 – 3.53 μm). Credit: J. O’Donoghue, NASA Infrared Telescope Facility (IRTF).

Co-author Dr Henrik Melin from the University of Leicester said: "Jupiter is a hot topic with Juno having just entered orbit at the planet. Leicester is home to the only UK group that is formally involved in this mission, and are directly involved with preparations for the JUICE mission, to be launched in 2022. We are very excited about the new science that these missions will bring."

Dr Tom Stallard, also from Leicester, and another co-author, added: "Our coordinated telescope observations of Jupiter are providing a global context to these space missions. This fantastic result, showing how the upper atmosphere is heated from below, was produced directly from Leicester's 2012 observing campaign, which was designed to try and answer why Jupiter's upper atmosphere is so hot. (The recent arrived NASA space probe) Juno will be measuring the aurora and its sources, and we expected the auroral energy to flow from the pole to the equator. Instead, we find the equator appears to be heated from plumes of energy coming from Jupiter's vast equatorial storms."

Featured image: Artist’s concept of the mechanism of heating from the Great Red Spot. Turbulent atmospheric flows above the storm produce both gravity waves and acoustic waves. Gravity waves are much like how a guitar string moves when plucked, while acoustic waves are compressions of the air (sound waves). Heating in the upper atmosphere 500 miles above the storm is thought to be caused by a combination of these two wave types ‘crashing’ like ocean waves on a beach. Credit: Art by Karen Teramura, UH IfA, James O’Donoghue.