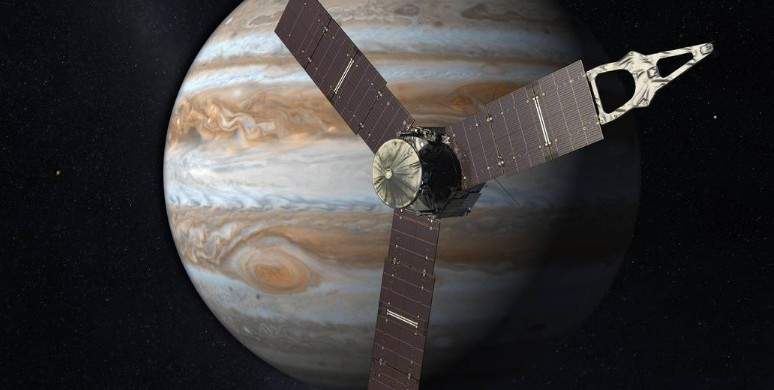 On the fourth of July, many Americans will be looking skyward in celebration of their nation’s independence.

On the same date, NASA, and astronomers worldwide will also look skyward in celebration of another great achievement – Juno’s arrival to Jupiter.

The arrival, however, is only the beginning.

What is the Juno mission?

Juno is a four-ton solar-powered space probe, 20 meters (66 feet) in diameter – think roughly the size of a basketball court – that has been flying towards the biggest, baddest planet in our solar system at a speed of 96 500 kph (60 000 mph) since its launch in August 2011.

Five years later, it has arrived to begin its mission of orbiting Jupiter for 37 close approaches over the next 20 months or so. While not the first spacecraft to orbit Jupiter, it is the closest, getting roughly 5 000 km (3 000 miles) away to gather data.

Juno takes its name from a Roman goddess, the wife of the god Jupiter. She was the first to see his true nature.

Likewise, scientists hope that the data collected may lead us to uncover one of the solar system’s most well-kept secrets – how Jupiter and the rest of the Solar System formed.

To learn these secrets, Juno will collect data about Jupiter’s structure, including its gravity, electric and magnetic fields, water content, auroras, plasma waves, and other particles in its environment. On top of all that, Juno will be taking some stellar photographs in not only high-definition visible light but ultraviolet and infrared light as well.

All this sounds great, but this mission is not without great risk.

Jupiter has the largest magnetic field of any planet in the solar system, and that field traps radiation in a vast belt around it – radiation that is 60 000 000 times more intense than that on Earth.

In order to get close enough to Jupiter to collect the data it needs, Juno will have to bypass the most intense areas of radiation.

On July 4, Juno will fire up its engines for a little over half an hour – just long enough to insert itself into a polar orbit of the planet. This is where the danger begins.

Under Jupiter’s murky cloud cover is, scientists believe, a layer of fluid, metallic hydrogen under such tremendous pressure that it acts as an electrical conductor. Couple that with Jupiter’s fast rotation that makes its days only ten hours long, and you have a magnetic field that can hurl electrons, protons, and ions at speeds nearing the speed of light.

Juno’s project manager, Rick Nybakken, has said that the spacecraft will receive the exposure equivalent to over 100 million dental x-rays over the course of its mission.

How will Juno survive?

Most of Juno’s 20 months will be spent orbiting safely out of reach of the radiation belt. But its 37 close flybys, lasting about one Earth day each, will require some armor.

Luckily, NASA scientists provided it with special wiring and shielding that is radiation-hardened to protect all of its sensors.

Juno also carries an 180-kg (400-pound) titanium vault – the first of its kind – to contain its flight computer and other instruments. The inside of this vault will only be exposed to 1/800th of the radiation outside.

This vault will protect Juno most sensitive equipment during its first – and most dangerous – flyby, when it will be at its most vulnerable. After this, degradation from radiation will happen very slowly thanks to its special orbit, and the amount of data it will collect will hopefully bring tremendous progress to our search for the origins of our solar system.

Until the fourth, scientists around the world will be waiting with baited breath to see if Juno can survive the closest approach to Jupiter yet. One thing is for certain, if they can pull this off, we will have a better understanding of the composition Jupiter and other gas planets in the universe.

Megan Ray Nichols is a science writer and editor of Schooled By Science.  When she isn’t writing, Megan enjoys camping, hiking and stargazing. She invites you to follow her on Twitter @nicholsrmegan.