More than 80 people have been killed and, at least, 90 injured after extreme pre-monsoon rains caused floods and landslides across northern Pakistan and Afghanistan on April 2 and 3, 2016. The number of casualties will probably rise as full damage assessments from remote areas are still not complete.

Heavy rains started on Saturday, April 2, bringing flooding to parts of Khyber Pakhtunkhwa, Kashmir and Gilgit-Baltistan provinces of Pakistan. Many of the deaths are thought to have been caused by collapsing buildings. Others were swept away by flooding waters or struck by lighting. Kohistan and Shanlga were among the worst affected districts.

It is known that poorly-built homes in rural areas are susceptible to collapse during heavy spring rains, but officials say people have been warned to move to safer places before the rains hit.

According to the Pakistan Meteorological Department, at least 4 locations in Khyber Pakhtunkhwa recorded the highest ever amounts of rain seen in a 24 hour period.

Meanwhile in Afghanistan, the floods killed 30 people, destroyed over 20 homes, while communications were knocked out and several roads blocked by flooding, said Wais Barmak, state minister for the Afghanistan Natural Disaster Management Authority, for Daily Sabah. Most casualties have been recorded in the central Daikundi, Uruzgan and Ghazni provinces. 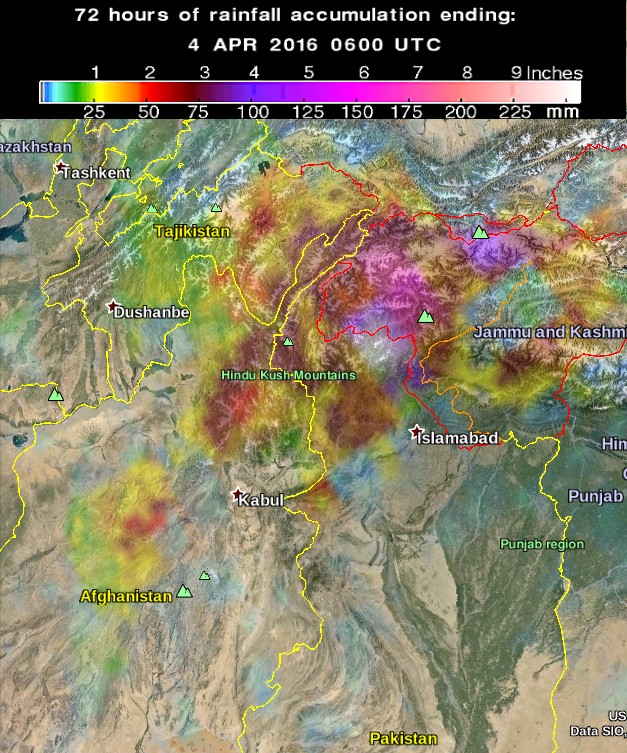 Extreme weather hits this region nearly every year claiming lives of hundreds of people. In 2015, landslides and flash floods claimed lives of at least 129 people in various provinces of Afghanistan while more than 81 were killed in Pakistan.

Since March 9, 2016, floods and landslides in Pakistan already left over 150 people dead.