Severe flooding across Somalia, on-going since October 19, 2015, has triggered an epidemic in water-borne diseases, an escalation of local commodity prices and an interruption of humanitarian aid delivery, according to the United Nation's (UN) report from November 20.

The ongoing extreme weather conditions such as Tropical Cyclones "Chapalla" and "Megh" were constantly battering Somalia for over a month. They are responsible for heavy rainfalls, causing severe, persistent floods across the country. In the period between October 19 and November 20, in total, over 132 000 people were affected by flood related incidents in different parts of Somalia. 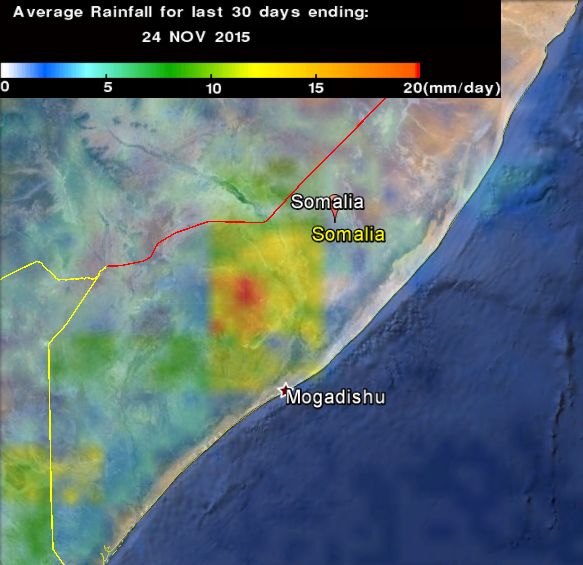 Until now, more than 60 000 people have been displaced in Bakool, Bay, Hiraan, Lower and Middle Juba and Middle Shabelle regions, according to local authorities, their partners and community and the Protection and Return Monitoring Network (PRMN).

Although the rains have eased a bit over the last couple of days, thousands of people, resident in the low-lying areas of southern and central Somalia remain at risk of flash and river flooding, according to the UN's Office for the Coordination of Humanitarian Affairs (OCHA).

Nearly 90,000 people have been affected by flooding in #Somalia amid 42,000 other people fled, says UN OCHA #Somalia pic.twitter.com/40JxyWqgMB

As the flooding continues, a risk of disease outbreaks becomes higher. Cholera cases have already been confirmed in Jowhar, Kismayo and Mogadishu. An outbreak of Acute Water Diarrhoea (AWD), one the leading killer diseases in Somalia, has been reported in the regions of Banadir, Mogadishu and Lower Shabelle. The situation seems to be under control at the minute, however, the if flooding continues, it may escalate again.

The health system in Somalia is among the least funded this year, having fulfilled only 30% of its requirements. Increased lack of essential medical kits and supplies remains an ongoing problem of the flood-stricken nation. The main cholera referral treatment centers in Mogadishu have been closed due to lack of funding. Health partners have mobilized to aid 577 000 people over the coming 3 months. 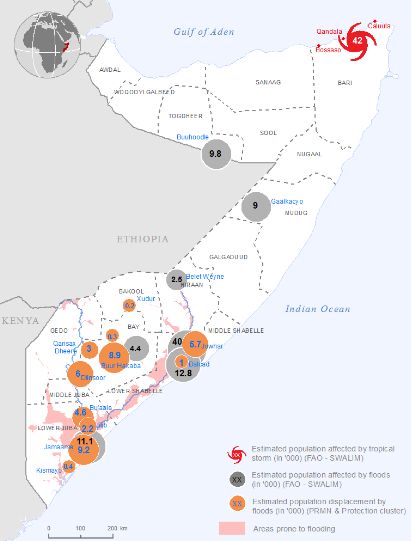 Damage caused by persistent flooding causes additional problems in attempts to provide aid to the affected population. "There is need to urgently repair main lifeline roads, bridges and airstrips. This will ensure supplies can reach the markets to stabilize the escalating food prices and enable humanitarian partners and aid supplies to reach those most in need of assistance,"OCHA emphasized.

Chlorine, hygiene kits and essential medications are currently under way to the outbreak-affected communities. Water wells across the affected locations will also be chlorinated for disinfection, OCHA reported.