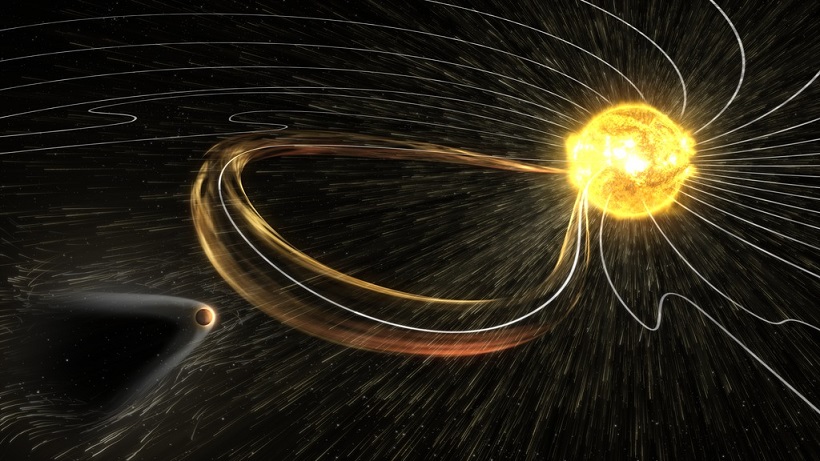 Data from NASA's Mars Atmosphere and Volatile Evolution (MAVEN) mission has allowed researchers to understand the drastic transformation in the Martian environment – from a wet, warm climate which may have supported life to the cold and dry planet that it has become today. The culprit, according to researchers, is the highly charged solar wind which is literally stripping away Mars' atmosphere as we speak.

Mars is currently a vast and cold desert. However, scientists have always assumed that Mars had a considerably warmer and wetter atmosphere in the ancient past and suspected the solar wind is responsible for the extreme change in Mars' atmosphere. The solar wind is a highly charged particle stream emitted from the upper atmosphere of the Sun ans traveling throughout the heliosphere at massive speeds of about 1.6 million km/h (1 million mph). MAVEN mission was launched on November 18, 2013 to specifically study Mars' upper atmosphere, ionosphere, and magnetosphere. Data recorded by the MAVEN spacecraft has for the first time confirmed that the solar wind is one of the most significant contributors in the loss of Mars' atmosphere.

“Mars appears to have had a thick atmosphere warm enough to support liquid water which is a key ingredient and medium for life as we currently know it,” said John Grunsfeld, astronaut and associate administrator for the NASA Science Mission Directorate in Washington. “Understanding what happened to the Mars atmosphere will inform our knowledge of the dynamics and evolution of any planetary atmosphere. Learning what can cause changes to a planet’s environment from one that could host microbes at the surface to one that doesn’t is important to know, and is a key question that is being addressed in NASA’s journey to Mars.”

The difference between the Earth and Mars, according to scientists, is that Earth's strong magnetic field protects its atmosphere from the solar wind. Mars on the other hand, has no such luxury and ions from Mars' upper atmosphere, especially carbon and oxygen ions, are trapped by the charged particles of the solar wind and eventually move into space. This "leakage" of Mars' atmosphere is an almost continuous process which is greatly accelerated during solar storms and other periods of high solar radiation.

MAVEN measurements indicate that the solar wind strips away gas at a rate of about 100 grams (0.25 pounds) every second. "Like the theft of a few coins from a cash register every day, the loss becomes significant over time," said Bruce Jakosky, MAVEN principal investigator at the University of Colorado, Boulder. "We've seen that the atmospheric erosion increases significantly during solar storms, so we think the loss rate was much higher billions of years ago when the sun was young and more active.” The solar wind interacts with the Mars upper atmosphere, but is deflected past Earth by a global magnetic field (artist's concept). Image credit: NASA GSFC

MAVEN has been studying the process by which the solar wind and ultraviolet light strip away gases from Mars' upper atmosphere. The data indicates that the three different areas of the Red Planet experienced atmospheric loss, down the "tail", where the solar wind flows behind Mars, above the Martian poles in a "polar plume", and from an extended cloud of gas surrounding Mars. The researchers determined that almost 75 percent of the escaping ions come from the tail region, and nearly 25 percent are from the plume region, with just a minor contribution from the extended cloud.

Mars' topography has many ancient features which indicate the one-time presence of plentiful water like valleys which may have been formed by large bodies of water or minerals which generally develop only in the presence of water etc. This and the current data from the MAVEN mission have led scientists to believe a few billion years ago, Mars had lots of water along side a thick Earth-like atmosphere which was gradually eroded by the solar wind. This has led to the dry and cold Red Planet that we see today.

​Featured Image: A solar storm approaches Mars (artist's concept). The Red Planet is thought to have lost much of its atmosphere to such extreme space weather. Credit: NASA GSFC​.