Severe rainfall has been affecting Kayah State in eastern Myanmar, over the last couple of days. Torrential downpours have caused strong flash floods and a violent landslide in the area. At least 17 people died and 60 homes have been devastated, while 360 people have been displaced by the landslide alone, according to local media.

Heavy rainfalls that were battering eastern Myanmar since October 9, 2015, caused the Sar Pwet Creek in Minbu to overflow the villages of Kyauk Tan, Yay Myat, Yay Twin Gone and Chaung Phyu on October 11. A number of homes in south of Innkan village in Natmauk township were flooded by the waters racing down the mountains while 3 houses have been swept away in Kyauk Tan village.

5.4 cm (2.13 inches) of rainfall was estimated to fell in Magwe, in a 24 hour period on October 12, according to government meteorologists. 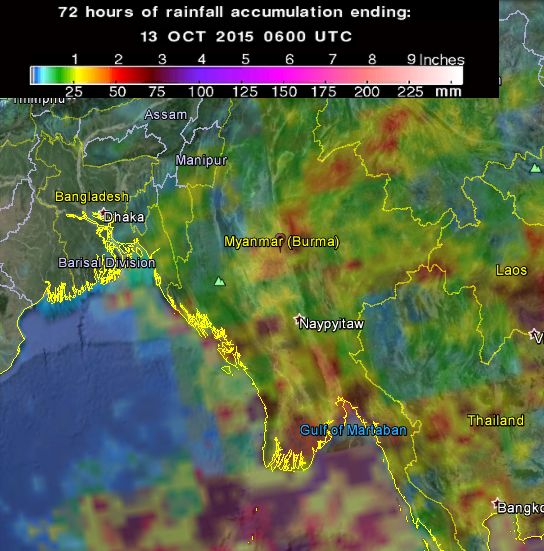 In Kayah State, strong downpours triggered a landslide in Hpasawng township on October 11, between the villages of Mawchi Taung Paw and Lokhalo. 17 people have been reported dead so far, and 60 homes have been devastated, according to local officials. Over 360 people have been displaced and moved to shelters.

On October 8, a person drowned when the light truck was caught in a stream of raging floodwater, near Kywae Min Kya village in Natmauk township. Fierce waters have carried the mini vehicle for 30 m (100 feet) downstream.

“The water was flowing very strongly. We used ropes to rescue all the passengers we could,” said U Than Aung, the chair of a motorbike carrier association in Natmauk township who was first on the scene and provided first aid to the victims.

Heavy rainfalls are still expected to affect parts of western, central, southern and eastern Myanmar, as of October 13.