Kaniksu, the Grizzly Complex and the Little Joe wildfires continue to burn across several states across the West US. NASA's Moderate Resolution Imaging Spectroradiometer (MODIS) instrument, onboard Aqua satellite, captured the fires across across Washington, Idaho and Montana, on September 28, 2015.

All wildfire complexes have begun with the strike of lighting during mid to late August. Most of them are well contained by now, however, some have afflicted serious damage and burnt down substantial amounts of ground.

The Kaniksu fire contains a complex of wildfires including Tower, Baldy, Onata, Grease Creek, Hall Mountain, Slate Creek and South Fork Slate Creek Trail. This fiery began to spread as of August 11. It burned the area of 26 120 acres (10 570 hectares), and is currently 85% contained, according to Incident Information System (InciWeb). 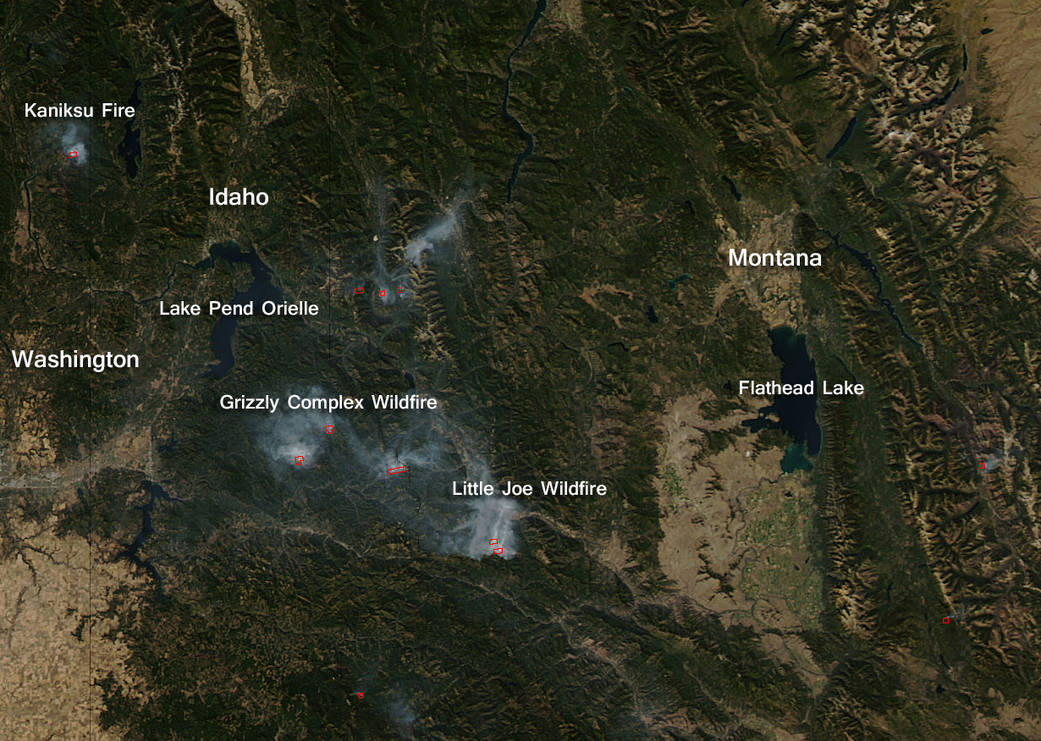 Active wildfires across Washington, Idaho and Montana, September 28, 2015. Multiple red pixels are heat signatures, and when accompanied by smoke as in the image above, it is indicative of fire activity. The smoke appears to be a light gray color. Image credit: Jeff Schmaltz, NASA Aqua/MODIS

Interior smoke can be seen by the local communities throughout the forests of northeast Washington, and numerous roads remain closed across the area, as the rest of the fires will most likely continue until the steady rainfall or snow extinguishes them.

The Grizzly fiery complex in Idaho contained 16 fires in total. It began on August 10, and was also caused by a lightning strike. Most of the fires have been contained so far or have grown together, and the complex now contains 3 large and 2 medium active fires burning despite the colder air temperatures and occasional rains.

So far, 19 000 acres (7 689 hectares) have been burnt down. The affected areas sustained significant damage to many trees, including the Settler's Grove of Ancient Cedars.

The Little Joe began on August 27, and is now 207 acres (84 hectares) in size. It spread across 11.3 km (7 miles) southwest of St. Regis, Montana, however it has been greatly contained over the last five days, in part due to mild weather conditions. No current evacuations have been reported across the area.

Featured image: Active wildfires across Washington, Idaho and Montana, September 28, 2015. Multiple red pixels are heat signatures, and when accompanied by smoke as in the image above, it is indicative of fire activity. The smoke appears to be a light gray color. Image credit: Jeff Schmaltz, NASA Aqua/MODIS