Heavy rainfalls affecting the southern China since September 15, 2015 caused severe flooding and landslides across the country, claiming 11 lives and leaving 12 people missing, so far. A high-risk flash flood warnings were issued across parts of New Territories in Hong Kong on September 21, as intense rainfall battered the area.

Abundant amount of precipitation caused rivers across southern China to overflow with raging flooding waters. 116 mm (4.5 inches) of rainfall was measured in Luodian in southern Guizhou province, and 148 mm (5.8 inches) in Shenzhen city in Guangdong province in a 24 hour period between September 19 and 20.

Over 90 mm (3.5 inches) of rain was reported to fall in only 2 hours across Pat Heung, Kam Tin and Sheung Shui in northern New Territories, Hong Kong, as of September 21. Due to its intensity the Hong Kong Observatory has issued a high-risk warning for possible flash floods in some areas.

Recorded precipitation amounts exceeded 40 mm (1.6 inches) in Yuen Long, while 20 mm (0.8 inches) was estimated across other parts of New Territories. 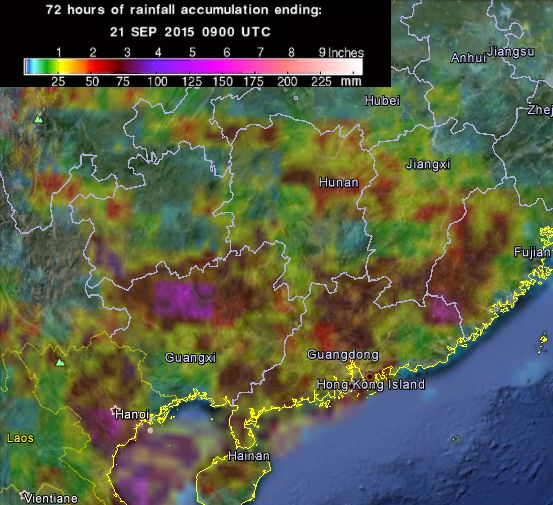 Flash floods and landslides have affected about  45 000 people in the Yunnan province and another 16 000 people in Sichuan province in China, as of Septemeber 18. Around 2 000 homes sustained light to severe damage, while 11 people were reported dead, and 12 missing across the area of Yunnan, The National Disaster Management Authority (CNCDR) reported.

Over the next 24 hours moderate to heavy rainfall is forecasted to continue affecting southern China. Flash flood warnings remain in effect for western Yunnan, parts of Jiangxi, Fujian, Guandong and Guangxi, China, as of September 21.

Moderate to heavy rainfall is forecast in southern China over the next 24 h, particularly in places of Guangxi, Guangdong and Fujian, and a flash flood warning is in effect for Western Yunnan, as well as parts of Jiangxi, Fujian, Guangdong and Guangxi.

The Hong Kong Observatory has forecasted heavy showers and a rough thunderstorm, as of September 21, as a trough of low pressure from Guangdong reaches the area. The rains are expected to continue over the next 24 hours.