Heavy rainfall has continued to batter northeastern India and has caused widespread flooding over the last couple of days. 736 000 people were affected by the severe weather conditions, 51 000 have been evacuated, and 18 people were reported dead across Assam, as of August 31, 2015.

Strong monsoon rains which continued to persist across the northeastern parts of India since the middle of June, have once more caused heavy flooding episodes across the already flood-stricken districts.

The Skymet Meteorology Division in India reported the low pressure area weakened into a cyclonic circulation on August 31 and pulled the monsoon trough northwards. 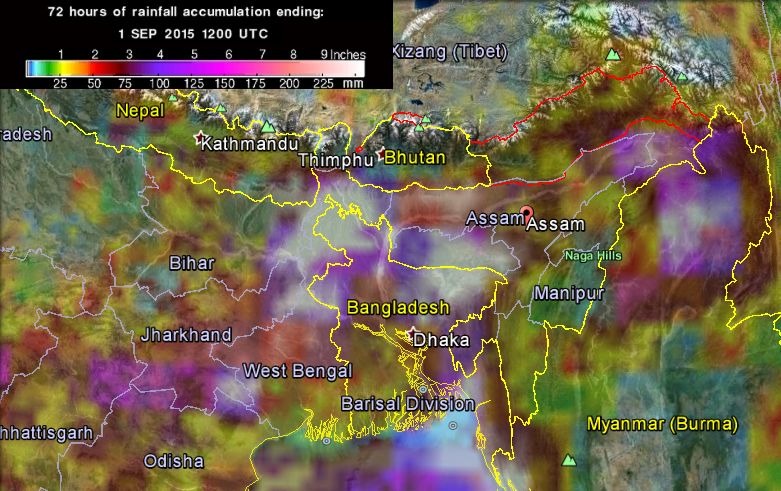 18 districts of Assam have been heavily affected by the flood induced conditions, of which Dhemaji district has been hit the worst, 763 of its villages have been inundated. The flood water have devastated at least 118 000 ha of agricultural land, local authorities reported.

The water levels of River Brahmaputra and other rivers across the northeastern parts of India have risen dangerously and are flowing above the danger mark.

The Indian Meteorological Department has issued an orange alert, as heavy to very heavy rainfall is expected across the states of Assam, Meghalaya, Sub-Himalayan West Bengal and Sikkim over the next 24 hours. After that, the rain intensity is expected to ease, however, the overflowing rivers will continue to cause problems for the locals. Due to that, a significant relief from the floods across the affected areas is only expected over the next couple of days.