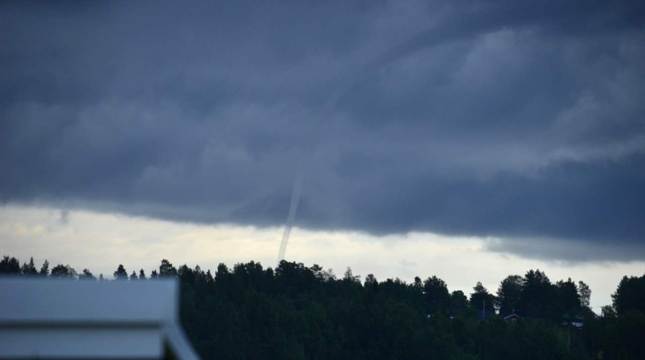 A tornado touch-down was observed on Saturday, July 25, 2015 in Luleå and Piteå in Norrbotten, northern Sweden.

Although twister touch downs are not quite as usual in Sweden, this time of the year is a season in which it's occurrence can be observed.

The exact process behind the tornado formation is yet to be fully understood, but scientists are able to provide a good explanation about conditions causing them to develop.

A prerequisite for tornado formation is a presence of a severe thunderstorm, called 'supercell'. A large volume of warm, moist air close to the surface, vertical air movement caused by atmospheric instability, and a violent confrontation of air fronts responsible for pushing the moist air upwards, are the key to the formation process.

Scientists assume the two opposing winds, moving at a different speed, cause the air between them to rotate around a horizontal axis. When one end of the axis gets caught in the supercell's updraft, the axis alignment will change to vertical, thus forming a 'funnel cloud'. The continuous upward pull of the supercell will cause the 'funnel cloud' to tighten and, consequently, increase the speed.

Mainly, tornadoes happen in the Tornado Alley; the area stretching from Texas into Kansas, and the surrounding Great Plains, in the United States. However, tornado events have happened across all continents, except Antarctica.

"There are usually about a dozen tornadoes in Sweden each year. Powerful tornadoes in Scandinavia can lift rooftops or cars, but usually only topple a few trees", says Camilla Albertsen, a meteorologist at the Norwegian Weather Service.

Exact numbers of yearly tornado events in the Sweden are difficult to guess because, more often than not, tornadoes are short-lived, which makes them difficult to observe.