USGS issued green alert for shaking-related fatalities and economic losses. There is a low likelihood of casualties and damage. Overall, the population in this region resides in structures that are resistant to earthquake shaking, though some vulnerable structures exist.

The magnitude was reviewed from 6.0 to 5.8 upon reception and analysis of data, GEONET said.

At the shallow depth of 4 km, this earthquake classes as severe. However, due to the distance from populated centers, it is not expected to be greatly damaging.

It has been felt all over the bottom half of the South Island. Reports of strong shaking have come in from Queenstown, Dunedin, Cromwell, Invercargill, and of course Wanaka.

There are no active faults in this part of New Zealand and it is unlikely to have ruptured the surface.

The most likely prognosis is that there will be a number of smaller aftershocks less than magnitude 5.0, continuiing to decrease in size and frequency over the coming days.

According to Stuff, Stephanie Botha, who lives in Tarras, east of Wanaka, said the earthquake "sounded like a freight train". Wanaka Tourism Office general manager James Helmore said the shake built up quite quickly and went on for more than 15 seconds. "It gave us all a bit of a shock," he said.

There were no immediate reports of damage or injury. 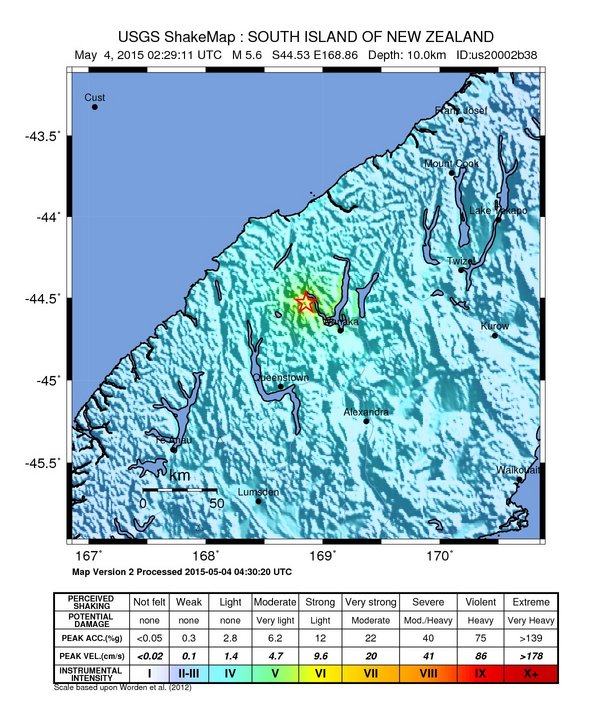