The LOw-Frequency ARray, (LOFAR) is a radio interferometer, or radio telescope, made up of several observing stations in Europe. Signals received at the various observing stations are digitally integrated into a phased array, which is a collection of dipole antennas that can be individually energized, causing them to go in or out of phase. This allows radio astronomers to adjust the various antennas, combining their sensitivity and providing a substantial field of view. In the past, large radio telescopes needed to be pointed at different observation positions, which increased their noise levels. LOFAR does not move, so is a more highly attuned instrument in the 10-240 megahertz range.

Galactic magnetic fields were discovered more than 50 years ago. How those fields are generated continues to be a mystery. What gives them their shape and their strength?

According to a recent press release, astronomers using LOFAR observed Galaxy M51, otherwise known as the Whirlpool Galaxy, finding that its magnetic field, along with a cloud of high-speed electrons, extends more than 40,000 light years away (as astronomers measure distance) from its center of mass. The magnetic field and cosmic rays (electrons) appear to be denser in the galaxy’s spiral arms, an observation that supports Electric Universe theory. Consensus science has difficulty explaining galactic magnetic fields (and cosmic ray electrons) because the theoretical pool of knowledge in which they swim contains no electrical entities that can provide a source for that magnetism. 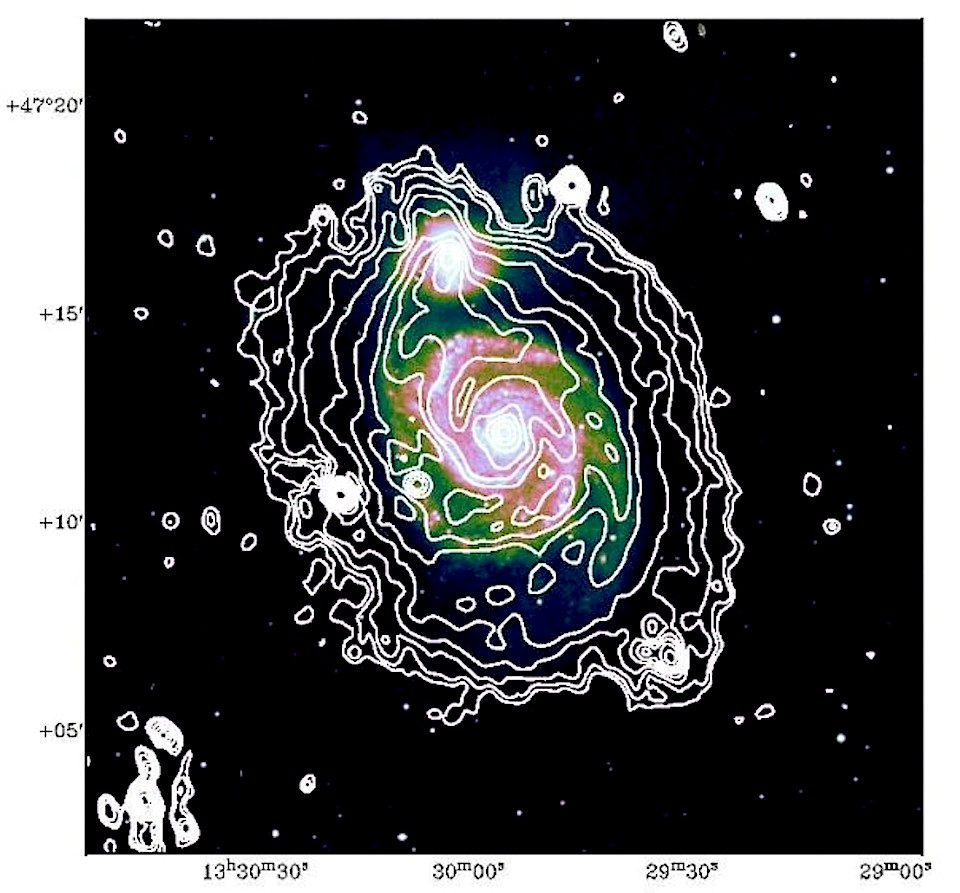 Instead, “star formation reducing turbulent energy,” “gas ejection,” and “how fast ordered magnetic fields arise from random ones” are discussed. No electromagnetism, no electric fields, and no motor-generator effects are included in their calculations. They rely on theories of cool gas falling into galaxies, supernovae explosions, star birth, and rotational energy to create the fields. However, those theories are not able to predict the fields observed in several representative spiral galaxies.

For charged particles to move, they must move in a circuit. The effects produced by an electric circuit must be considered. The consensus scientific worldview only permits isolated “islands” in space, where Electric Universe theory emphasizes connectivity with an electrically active network of Birkeland current filaments.

Filaments expand and explode, throwing off plasma that can accelerate to nearly the speed of light. Jets from opposite poles of a galaxy end in energetic clouds emitting X-ray frequencies. Those phenomena are based in plasma science and not gas kinetics, gravity, or particle physics. Astrophysicists see magnetic fields but not the underlying electricity, so they are at a loss to explain them.

Astronomers maintain that galaxies are clouds of hydrogen gas and intergalactic dust that were assembled by gravity until they coalesced into glowing thermonuclear fires. The conventional community also proposes that most galaxies contain black holes of unbelievable magnitude. It is those “gravitational point sources” that are said to cause galaxies to spin, for jets of gamma and X-rays to appear, and for “radio lobes” sometimes larger than the parent galaxy to form, even though no black hole has ever been observed.

The newly discovered larger magnetic fields around M51 are no surprise to Electric Universe advocates.

In 1981, Hannes Alfvén said that galaxies are similar to one of Michael Faraday’s inventions, the homopolar motor. A homopolar motor is driven by magnetic fields induced in a circular conducting plate. The plate is mounted between the poles of an electromagnet, causing it to spin at a rate proportional to the input current.

As mentioned, galaxies travel within a circuit of electricity circulating through the cosmos. Electricity organizes masses of plasma sometimes larger than galaxy clusters. That plasma is primarily composed of neutral atoms, but free electrons, protons and other charged particles are also present. That electric power is orders of magnitude more powerful than gravity. Birkeland current filaments within those plasma clouds attract one another over distance, and are the most powerful long-range attractors in the Universe. Electric charges flowing through dusty plasma create and sustain the magnetic fields detected by LOFAR.