This event did not produce a Coronal Mass Ejection (CME). However, the responsible region is growing, it maintains its magnetic complexity and is still in geoeffective position. More flares and Earth-directed CMEs from this region in the days ahead.

A relatively small filament eruption was observed in NE quadrant (near N15E40) just after 12:00 UTC on February 3. An associated narrow, northward directed CME was later observed in LASCO C3 coronagraph images. This event was determined to be on a trajectory away from the Sun-Earth line.

Meanwhile, a huge plasma filament is rotating over the Sun's SE limb. If it destabilizes and erupts, it can eject parts of itself into space and produce a Hyder flare. 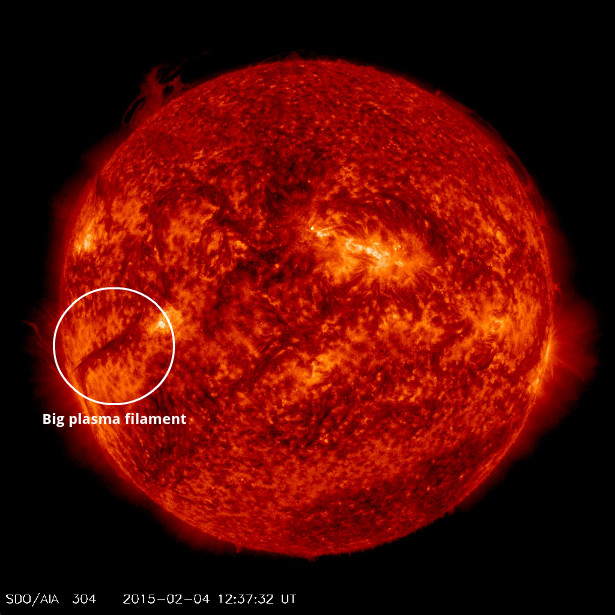 Hyder flare name is given to a flare that occurs away from an active region or sunspot group and that is associated with the sudden disappearance of a dark filament. They are generated by pieces of destabilized filament that fall back to the solar surface and explode.

The appearance of these flares can range from a string of bright knots on one or both sides of the filament (or rather, the position previously occupied by the filament, sometimes called the filament channel), to a single or double ribbon flare.

One interesting characteristic of Hyder flares is that they usually develop or rise to maximum brightness much more slowly than do the more common flares associated with active regions. The larger Hyder flares may take 30 to 60 minutes to rise to a peak intensity, and then they may last for several hours. Although they may attain a large area, they usually have a relatively low intensity. Thus, classifications for a large Hyder flare may read 2F (F=faint), 2N (N=normal) or possibly even 3F. This contrasts to an active region flare in which 3F is very rare. An active region flare that attains sufficient area to put it into the importance class 3, will invariably have either an N or more usually a B (B=brilliant) brightness classification.

X-ray flares and radio (microwave) bursts associated with the optical Hyder flare, are also generally long lived phenomenon and are classified as the gradual rise and fall type of event (in contrast to the impulsive and complex events associated with large active region flares).

Generally, Hyder flares are not associated with energetic particle emission or geomagnetic storms (implying that they may not be associated with a coronal mass ejection). However, this is not always the case… read the rest at IPS.gov.au.

There are currently 4 numbered sunspot regions on the solar disk.

Other regions are relatively quiet and stable. 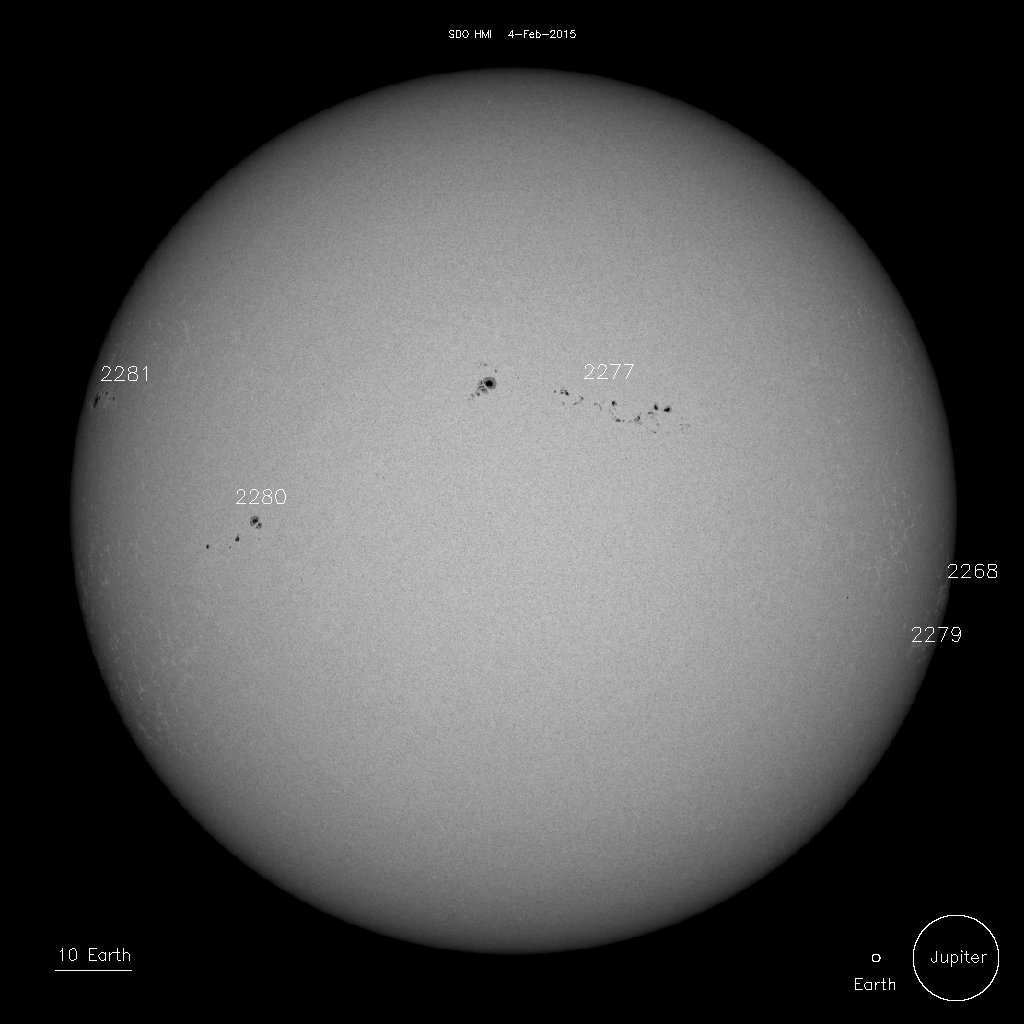 Solar activity is expected to be at low levels with a chance for isolated M-class flares (R1-R2, Minor-Moderate) today. A decrease to a slight chance for M flares is forecast for February 5 and 6.

The greater than 2 MeV electron flux at geosynchronous orbit is forecast to remain at high levels possible for the next three days (February 4 to 6) due to continued influence of CH HSS. The 10 MeV proton flux is forecast to be at or near background levels (Below S1-Minor).

Solar wind parameters indicated waning CH HSS effects today but they are expected to continue at enhanced influence for the next three days. 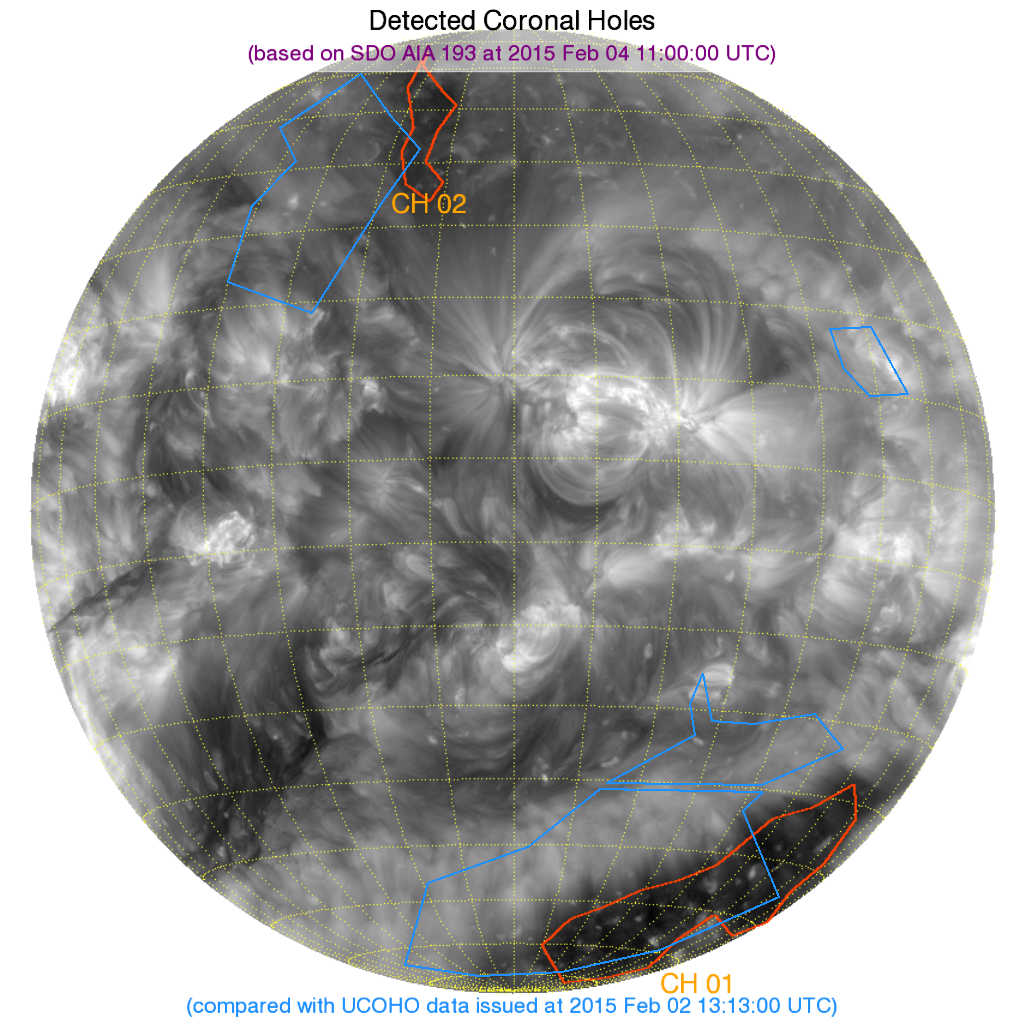 The geomagnetic field was at quiet to unsettled levels due to CH HSS effects during last 24 hours.

Quiet to unsettled levels are expected from February 4 to 6 as coronal hole effects wane.