A second M-class solar flare of the day erupted at 18:13 UTC. The source of this latest event was 'beta-gamma' classified Active Region 2127 capable of producing strong eruptions on the Sun. The event started at 17:55, peaked at 18:13 as M1.5 solar flare and ended at 18:48 UTC, almost a full hour.

A Type II and IV radio emissions were associated with the event. Type IV emissions occur in association with major eruptions on the sun and are typically associated with strong coronal mass ejections and solar radiation storms.

NOAA SWPC forecasters estimate 40% chance for M-class, and 5% chance for X-class solar flare in the next 2 days.

Region 2132 continued to show signs of growth and was also responsible for several optical flares in last 24 hors. Region 2129 (S05W58, Bxo/beta) displayed spot reemergence from its previously reported plage status but has yet to produce significant flare activity. The remaining seven numbered sunspot groups were stable or in a state of slight growth during last 24 hours. (SWPC – August 1, 2014 @ 12:30 UTC) 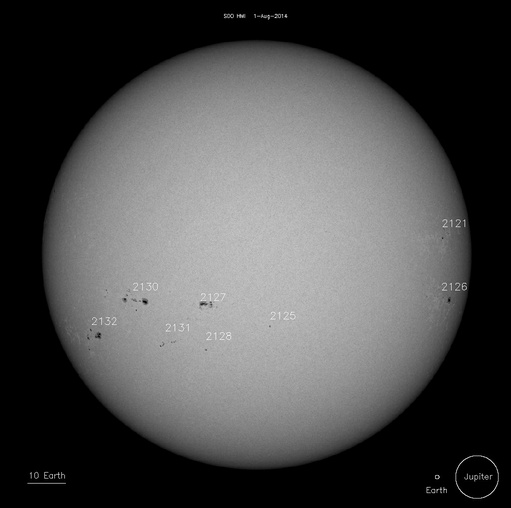