As the ESA's comet chaser Rosetta approaches Comet 67P/Churyumov-Gerasimenko (67P) for an August rendezvous, the comet's core is finally coming into sharper focus. Yesterday, ESA released a new set of images taken by the OSIRIS spacecraft on July 20th and a striking 3D model of 67P's nucleus. Images were taken from a distance of 5 550 km.

The resolution of the latest images is 330 feet (100 meters) per pixel. At that resolution, 67P appears to consist of two parts: a smaller head connected to a larger body. The connecting region, the neck, is proving to be especially intriguing.

Each image in this sequence is separated by two hours, and the comet rotates with a period of approximately 12.4 hours. The binary nature of the comet can now be seen even images that haven’t been interpolated to smooth out the pixels, which overall has been likened to a duck in shape. The change in position of the dark strip across the ‘neck’ of the comet in the second and third images is a result of the change in illumination and the resulting shadows cast on the surface as the comet rotates.

One area of the neck seems significantly brighter than surrounding regions. This bright region, seen most clearly in the first image, may result from differences in surface composition or grain size. For example, could it be a region of freshly exposed ice or the product of resurfacing. Alternatively, it could be a topographical effect. The cause of this bright region will become clearer once higher-resolution images and spectral data are available.

The comet’s neck, that is, the join between the two segments of the comet nucleus, will hold important clues to the comet’s evolution history. Studying this region from close up, not just with images but also with other instruments to assess its composition, will help determine if the comet is a result of two separate bodies that are fused together, or if it is one object that has eroded in a dramatic fashion to produce the shape we see. (Rosetta blog) 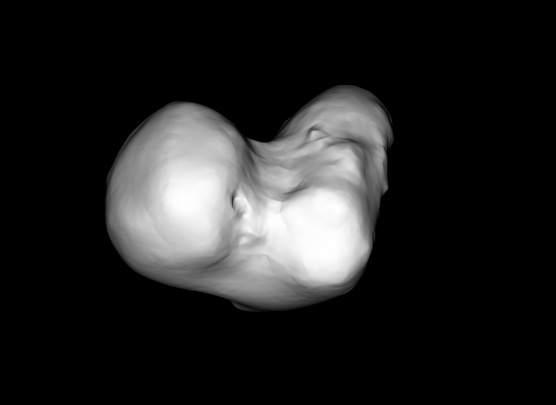 Click here to see the animation of comet's 3D shape.

"The only thing we know for sure at this point is that this neck region appears brighter compared to the head and body of the nucleus," says OSIRIS Principal Investigator Holger Sierks from the Max Planck Institute for Solar System Research in Germany. This collar-like appearance could be caused by differences in material or grain size, or could be a topographical effect–no one knows.

The appearance of 67P reminds mission scientists of comet 103P/Hartley, which was visited in a flyby by NASA’s EPOXI mission in 2010. While Hartley’s ends show a rather rough surface, its middle is much smoother. Scientists believe this waist to be a "gravitational low." Because it contains the body’s center of mass, material kicked up by, say, meteoroid impacts, that cannot leave the comet’s gravitational field is most likely to be re-deposited there.

The cadence at which OSIRIS is making observations of the comet is now increasing, focusing on different aspects of cometary science, and not just on the details of the nucleus. In general, some observations will focus on basic parameters of the comet, such as rotation rate and shape, and determining its mass and volume in order to establish its density, while others will provide wider-angle views of comet’s environment.

Similarly, Rosetta’s other science instruments are also beginning to analyse the comet at a range of wavelengths to determine the comet’s temperature, gas and dust composition and production rates, nucleus composition and more. By August 6, ESA expect to see high-resolution, close-up views of the comet surface.

In addition, Rosetta’s navigation camera, NAVCAM, is now imaging the comet daily for navigation purposes during the final approach. Therefore, presented here is the NAVCAM view from July 23, which also now shows the outline of the comet’s shape. 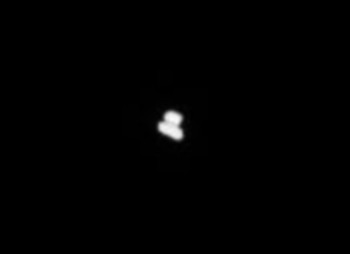 Rosetta will be the first mission in history to rendezvous with a comet, escort it as it orbits the sun, and deploy a lander to its surface.

On August 6, Rosetta will arrive at the comet at a stand-off distance of 100 km and a relative speed of just 1 m/s. Arrival will mark the start of an intensive period of scientific data gathering to further characterize the comet and determine candidate landing sites for the Philae lander.

In the following weeks, Rosetta will lower its orbit, aiming to get as low as just 10 km; many unknowns remain about 67P/C-G, including its mass, gravitational field and outgassing activity, all of which must be determined and understood before Rosetta can move in that close.

Mass is possibly the most uncertain of all the cometary parameters (because the density is extremely uncertain) yet is the single most important parameter to be estimated from the standpoint of early navigation activities at the comet.

The latest science data – including recent images indicating the comet is a complex 'contact binary' – is enabling the mission team to refine models of the comet. Based on the best estimates of the comet size and shape available before the recent images, the mass is estimated at 3.14×10^12 kg. 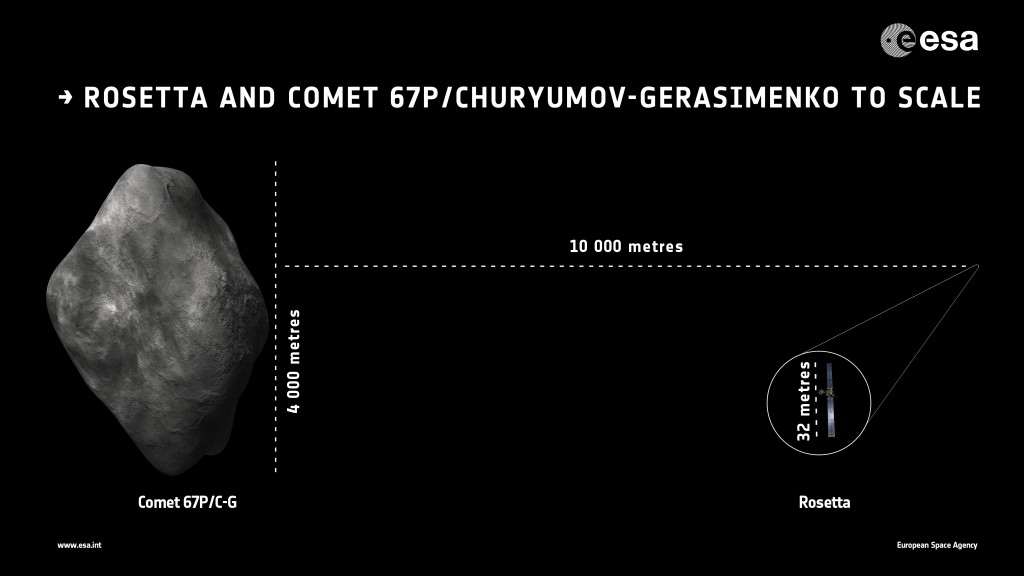 Rosetta and comet 67P/C-G to scale, assuming Rosetta is orbiting at a distance of 10 km, and the comet is about 4 km wide. Credits: ESA.

The next high-resolution OSIRIS image will be published on July 31st. On July 23rd, the comet and Rosetta were some 403.5 million km away from Earth.