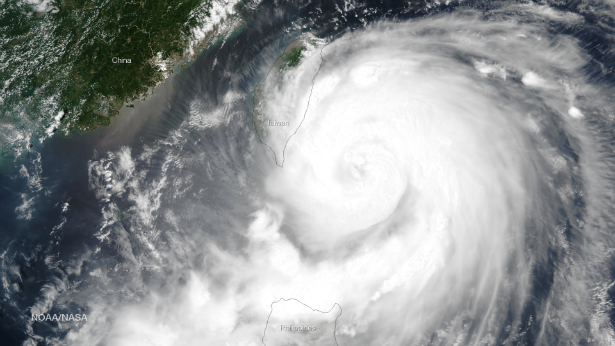 Typhoon Matmo made landfall in Taiwan, south of Hualian, early on July 22, 2014.  Matmo is the third typhoon in the western Pacific Basin in less than three weeks. This is the first typhoon to make landfall in Taiwan this year, coming ashore near the township of Changbin on the island's east coast.

Matmo made landfall as a category 2 typhoon. According to Taiwan's The Central Weather Bureau (CWB), Lanyu Township reported wind gust of 212 km/h (132 mph). 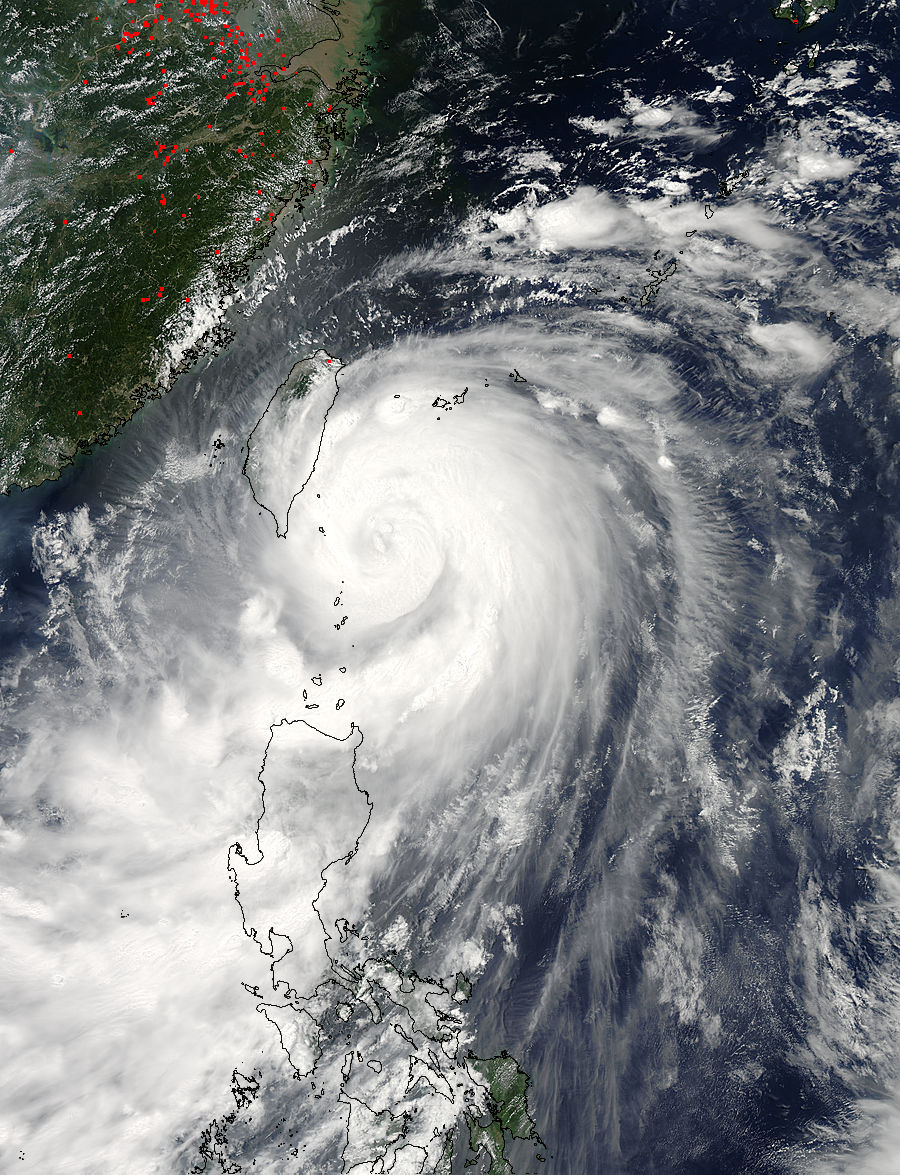 The Moderate Resolution Imaging Spectroradiometer or MODIS instrument snapped a visible picture of Typhoon Matmo's clouds on July 22, 2014. The MODIS image showed a center obscured by clouds. At the time of the image, the center was southeast of the southeastern tip of Taiwan. The image also showed that the southernmost band of thunderstorms were affecting Luzon, in the northern Philippines. (Credit: LANCE Rapid Response/MODIS)

Rainfall will average 100-200 mm (4-8 inches) across much of northern and western Taiwan, with local amounts in excess of 300 mm (12 inches) as the system tracks over the mountains in the northeastern Taiwan.

The Central Weather Bureau issued typhoon warnings for most of Taiwan as Typhoon Matmo moved inland across Taiwan, bringing very heavy rain and damaging winds over eastern areas. Storm surge flooding is expected along the east coast of Taiwan. 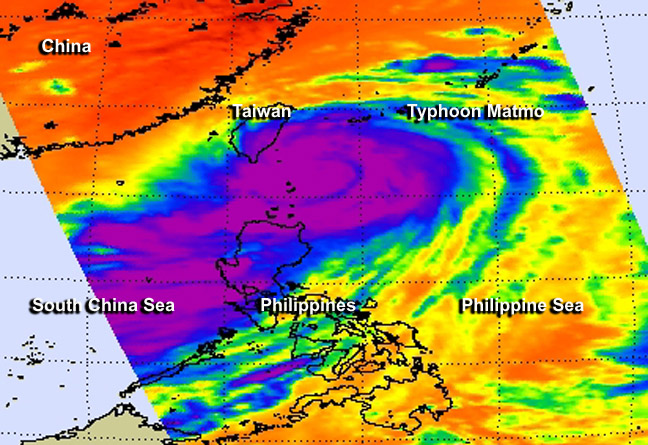 Land interaction and dry air will rapidly weaken the system as it moves farther inland. Widespread torrential rains are expected in the region. Heavy rainfall will likely create dangerous and life-threatening mudslides. Matmo is generating 9 meter (30-foot) high seas which means rough seas and dangerous swells for the east coast of Taiwan in addition to typhoon-force winds, heavy rainfall and flash flooding potential. 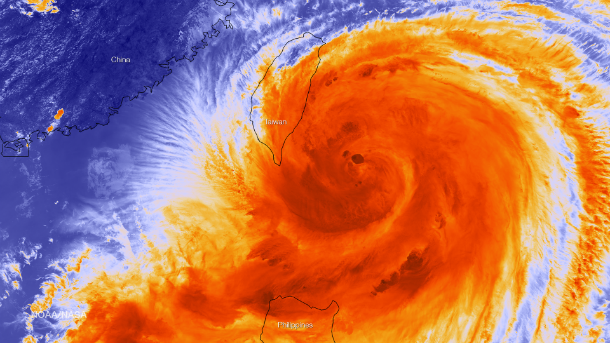 NASA's Suomi NPP satellite took this infrared satellite image at 05:15 UTC on July 22, 2014. Areas of deep convection can be seen in the colorized infrared imagery, as areas of dark orange, surrounding the eye and along the outer bands. (Credit: NOAA/Suomi NPP)

The Philippine national weather agency, PAGASA, has continued a "Public Storm Warning Signal No. 2" for the Batanes Islands, a small group of islands that lies about halfway between the country's major northern island, Luzon, and the southern tip of Taiwan.

Matmo is expected to weaken into a tropical storm as it tracks into the Taiwan Strait and then make landfall in Fujian Province in China. Once Matmo exits Taiwan, the JTWC doesn't expect Matmo to strengthen before its second landfall.

Matmo could also bring heavy rain and wind to the southern Ryukyu Islands and parts of Okinawa, which was impacted by Typhoon Neoguri early in July. The Japan Meteorological Agency has issued warnings for high waves, and advisories for gale-force winds and thunderstorms. 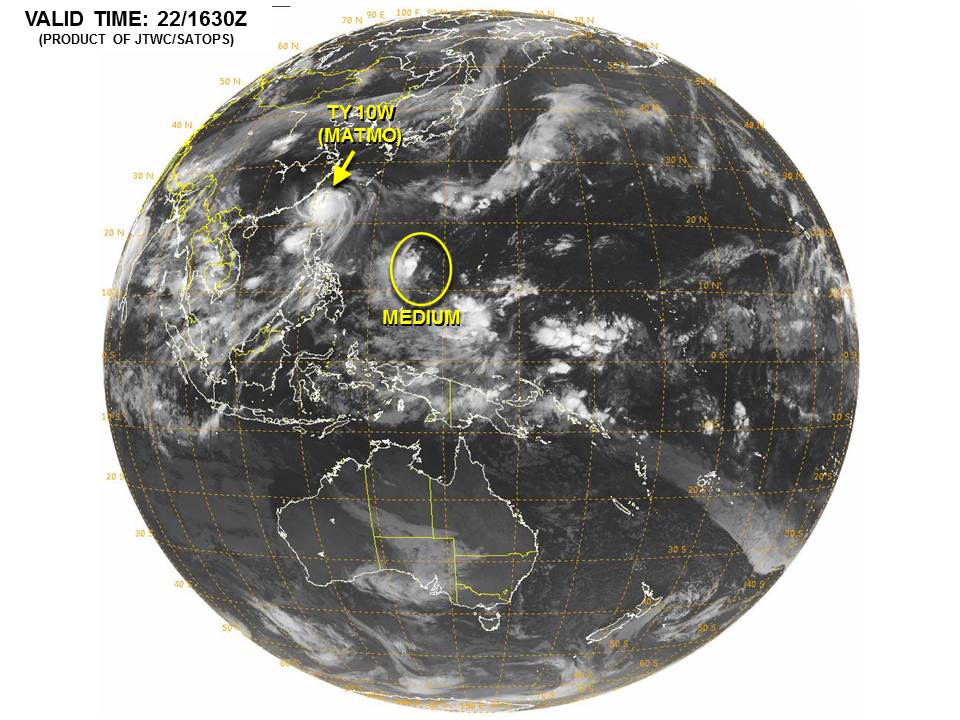