University of Southampton researchers have found that rainwater can penetrate below the Earth's fractured upper crust. Fluids derived from rainwater were found at the ductile crust – where temperatures of more than 300 C and high pressures cause rocks to flex and flow, and not fracture.

Surface-derived waters reaching such depths are heated to over 400 C and significantly react with crustal rocks. Flowing through the crust, fluids leave behind deposits of minerals, which may contain a small amount of water, trapped within them. The crust ranges from 5–70 km (~3–44 miles) in depth as the outermost layer. The temperature of the crust increase with depth, reaching values typically in the range from about 500 °C (900 °F) to 1,000 °C (1,800 °F) at the boundary with the underlying mantle.

The research points that fluids in the Earth's crust can weaken rocks and even may help to initiate earthquakes along locked fault lines. The new findings suggest that rainwater may be responsible for controlling important processes, even deep in the Earth. This could have major implications for further understanding of earthquakes. 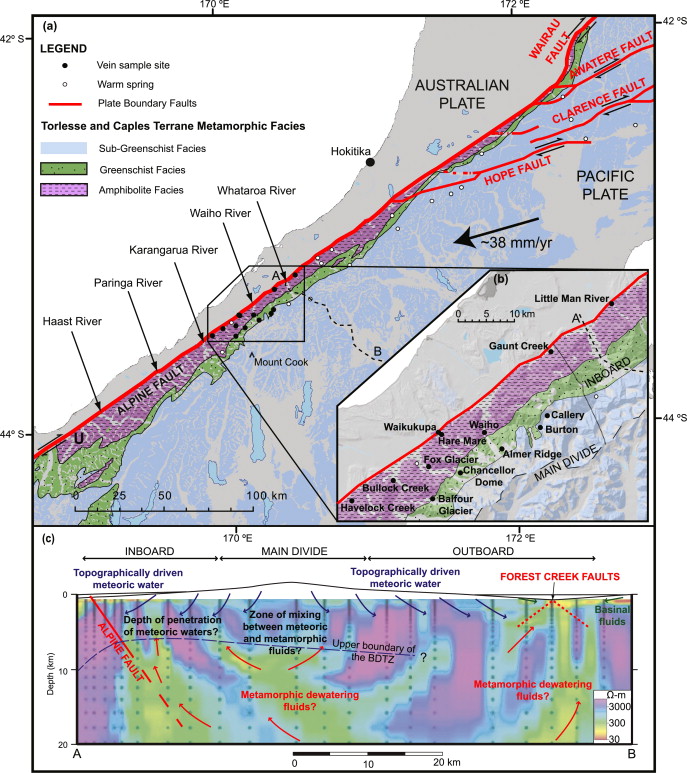 Researchers from the University of Southampton, GNS Science (New Zealand), the University of Otago, and the Scottish Universities Environmental Research Centre studied geothermal fluids and mineral veins from the Southern Alps of New Zealand, where the collision of two tectonic plates forces deeper layers of the earth closer to the surface.

"Fluids may come from a variety of sources in the crust. In the Southern Alps fluids may flow upwards from deep in the crust, where they are released from hot rocks by metamorphic reactions, or rainwater may flow down from the surface, forced by the high mountains above. We wanted to test the limits of where rainwater may flow in the crust. Although it has been suggested before, our data shows for the first time that rainwater does penetrate into rocks that are too deep and hot to fracture." Dr Catriona Menzies, University of Southampton/National Oceanography Centre

A team led by Dr. Catriona Menzies of University of Southampton, are now looking further at the implications of their findings in relation to earthquake cycles as part of the international Deep Fault Drilling Project, which aims to drill a hole through the Alpine Fault at a depth of about 1km later this year. Rapid uplift and mountain building along the Alpine Fault has exhumed fault rocks from depth, and uplift continues to restrict earthquake activity to depths that are shallower than normal.