A new eruption is occurring at Nyamuragira volcano, DR Congo. A lava lake has appeared in the main pit inside its summit caldera, but so far, reports of lava flows (presumably from flank vents) on the northern slope of Nyamuragira could not be verified, VolcanoDiscovery reports.

A recent Landsat satellite image shows the new lava lake, and thermal anomalies as well as increased SO2 concentrations above the close-by Nyiragongo and Nyamuragira have been detected over the past days. Both volcanoes are located just north of the Congolese city of Goma, near the border with Rwanda. 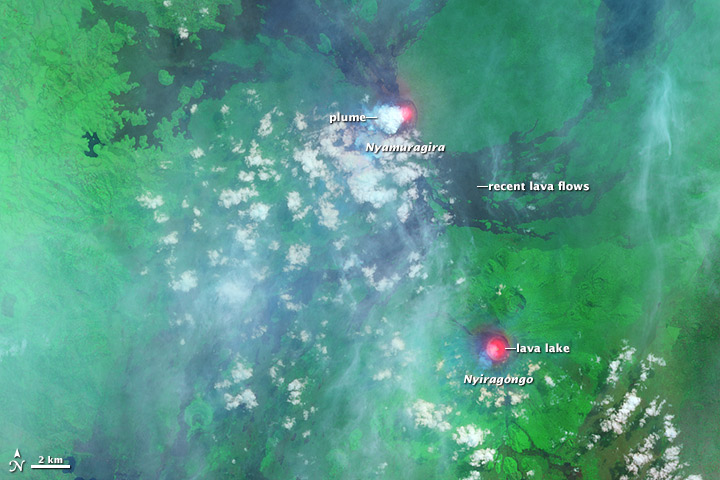 The false-color image combines shortwave-infrared, near-infrared, and green light as red, green, and blue, respectively. Shortwave- and near- infrared light penetrates hazy skies better than visible light, so more surface detail is visible in this image than would be in natural-color. Because very hot surfaces glow in shortwave-infrared, the lava lakes within the summit craters of Nyamuragira and Nyiragongo appear bright red. The dark lava flows spreading from Nyamuragira were erupted within the past 50 years, some as recently as 2012. Vegetation is bright green.

Africa's most active volcano, Nyamuragira is a massive high-potassium basaltic shield volcano that rises about 25 km north of Lake Kivu, NW of Nyiragongo volcano. Nyamuragira, also known as Nyamulagira, has a volume of 500 cu km, and extensive lava flows from the volcano blanket 1500 sq km of the western branch of the East African Rift. The broad low-angle shield volcano contrasts dramatically with its steep-sided neighbor Nyiragongo. The 3058-m-high summit of Nyamuragira is truncated by a small 2 x 2.3 km caldera that has walls up to about 100 m high.

Historical eruptions have occurred within the summit caldera, frequently modifying the morphology of the caldera floor, as well as from the numerous fissures and cinder cones on the volcano's flanks. A lava lake in the summit crater, active since at least 1921, drained in 1938, at the time of a major flank eruption. Historical lava flows extend down the flanks more than 30 km from the summit, reaching as far as Lake Kivu. (GVP)