The island sits roughly one kilometer (0.6 miles) offshore and is likely a “mud volcano”. It rose from the seafloor near Gwadar on September 24, shortly after the earthquake struck about 380 kilometers (230 miles) inland. 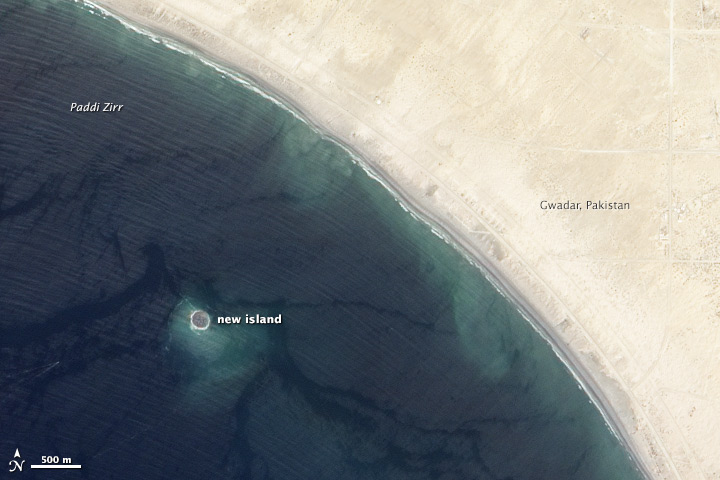 The lower image, acquired by the Operational Land Imager on the Landsat 8 satellite, shows the same area on April 17, 2013. 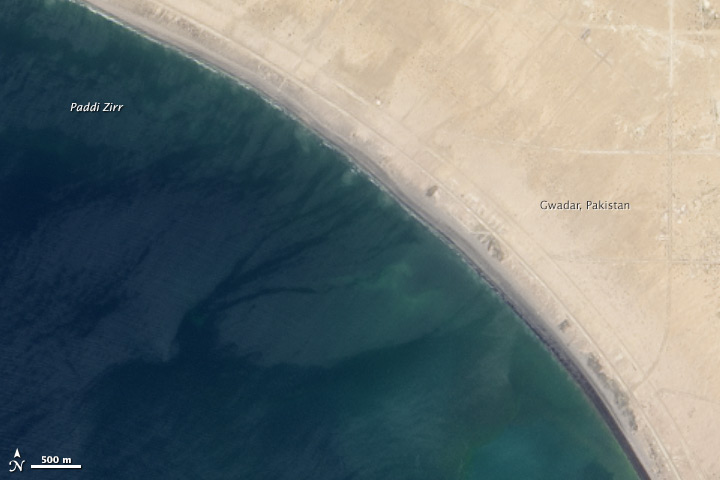 In the satellite images, lighter shades of green and tan in the water reveal shallow seafloor or suspended sediment. The water depth around the new island is roughly 15 to 20 meters, according to marine geologist Asif Inam of Pakistan’s National Institute of Oceanography. “The floor in that area is generally flat, but the gradient in this area changes quite abruptly,” Inam said. The top image from ALI is also clear enough to show the parallel ripples of waves marching toward the shore.

The aerial photograph below from the National Institute of Oceanography provides a close-up of the landform, estimated to stretch 75 to 90 meters (250 to 300 feet) across and standing 15 to 20 meters (60 to 70 feet) above the water line. The surface is a mixture of mud, fine sand, and solid rock. Click here to download video for a first-hand view. 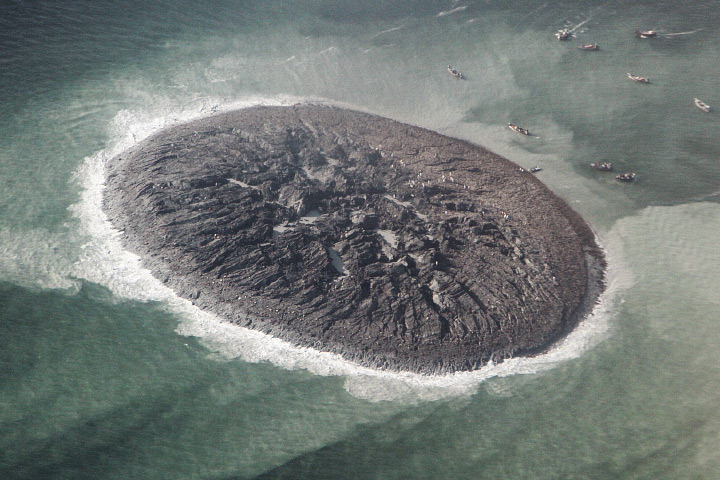 Photograph and video courtesy of the National Institute of Oceanography, Pakistan.

“The island is really just a big pile of mud from the seafloor that got pushed up,” said Bill Barnhart, a geologist at the U.S. Geological Survey who studies earthquakes in Pakistan and Iran. “This area of the world seems to see so many of these features because the geology is correct for their formation. You need a shallow, buried layer of pressurized gas—methane, carbon dioxide, or something else—and fluids. When that layer becomes disturbed by seismic waves (like an earthquake), the gases and fluids become buoyant and rush to the surface, bringing the rock and mud with them.”

Inam asserted that the underground pressure in this case came from expanding natural gas. “The main driving force for the emergence of islands in this part of the world is highly pressurized methane gas, or gas hydrate. On the new island, there is a continuous escape of the highly flammable methane gas through a number of vents.”

Several of these islands have appeared off the 700-kilometer-long Makran coast in the past century noted Eric Fielding, a tectonics scientist at NASA’s Jet Propulsion Laboratory. He explained that the Makran coast is where the Arabian tectonic plate is pushed northward and downward to go underneath the Eurasian continental plate. The thick layer of mud and rock on the Arabian Plate is scraped off and has formed the land in southwestern Pakistan, southeastern Iran, and the shallow underwater area offshore.

“The Makran coast is not very populated and any such event may easily go unnoticed, so satellite images are extremely important,” Inam said. “Mud volcanoes and islands are a natural hazard and threat to navigation.”

The life of this island is likely to be short. That underground pocket of gas will cool, compress, or escape over time, allowing the crust to collapse and settle back down. Waves, storms, and tidal action from the Arabian Sea will also wash away the loose sand, soft clay, and mud. Barnhart says such islands usually last a few months to a year before sinking back below the water line.