After preliminary analysis, both USGS and EMSC are reporting magnitude 7.7 earthquake at shallow depth of 20 km (12.4 miles).

A number of aftershocks have occurred which is making life difficult for inhabitants. An M 5.9 and M 4.7 earthquake have been the largest so far, however it can be expected that aftershocks will plague the region in the coming hours and days. By Wednesday morning [UTC] USGS registered 15 strong aftershocks.

Overall, the population in this region resides in structures that are highly vulnerable to earthquake shaking, though some resistant structures exist. The predominant vulnerable building types are unreinforced brick masonry and rubble/field stone masonry construction.

Many houses have collapsed, and no power is reported in parts of Balochistan. It is unknown the extent of these collapsed houses is still unknown.

By latest reports there were 515 fatalities according to officials within Pakistan in English press, 600 is still quoted in some Urdu press, and 400 is still common place. The earthquake left more than 100 000 people homeless. (ER)

Around 400 fatalities are expected using theoretical studies and the current USGS shakemap.

Local media is reporting that a small island has emerged on Gwadar coastline, near an area called ‘Jhanda’, as a result of this earthquake. The newly appearing island is said to have a mountainous terrain rising up to a 30 meters (100 feet). A similar island had appeared in Hangal, the coastal area of Lasbela, three years ago.

This impressive seismogram has been recorded by the Geofon seismograph at Kabul, Afghanistan – The many powerful aftershocks can also be seen on this seismogram. Image credit: GEOFON 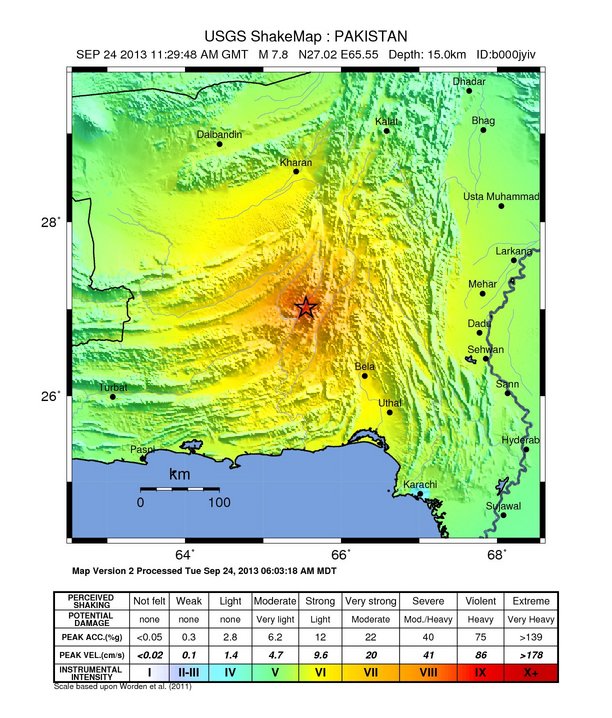