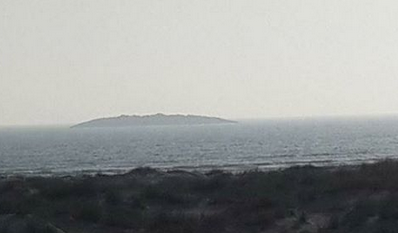 A new island has emerged off the coast of Gwadar in the Arabian Sea after a massive M7.7 earthquake hit western Pakistan on September 24, 2013. The new island has mountainous terrain and is rising up to 30 meters (100 feet). 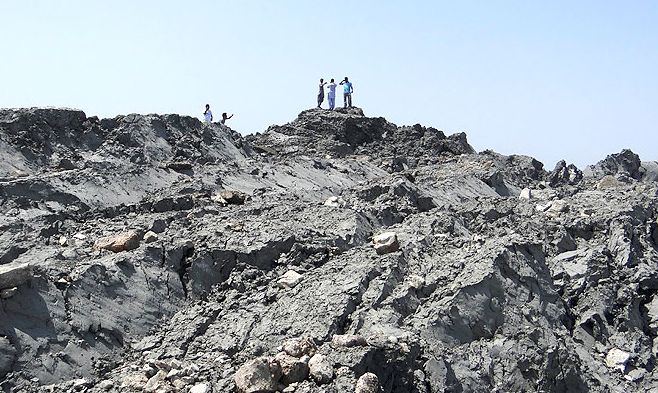 Image of the new island courtesy of Pakistani Government 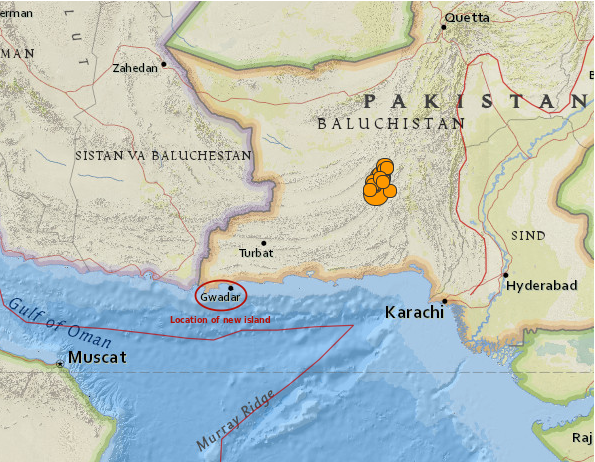 A similar island had appeared in Hangal, the coastal area of Lasbela, three years ago. The island was there for 4 – 5 months and then it went back into the sea.

A new island formed by a mud volcano emerged offshore of Balochistan, Pakistan on November 26, 2010, and the same spot about a year before it emerged. Image credit: NASA Earth Observatory

Seismologists suspect this new island is also a temporary formation and a result of what is called a "mud volcano". This is basically a jet of mud, sand and water that gushed to the surface after the earthquake. Liquefaction of sand and mud layers take place after any earthquakes, but it takes a strong one to produce an islands such as this one.

"Sandy layers underground are shaken, and sand grains jiggle and become more compact,"John Armbruster, a seismologist at the Lamont Doherty Earth Observatory at Columbia University told NBC News. The shifting sand layers are compacted and pressurize the water, which gushed upwards, carrying mud and sand along with it.

USGS geophysicist Paul Earle told NBC News that mud volcanoes don't need an earthquake to set them off. There are "mud volcanoes in Yellowstone that have not been triggered by earthquakes," he said.

But Geologist Dave Petley, a landslide expert, thinks the island's low, arcuate (or bow) shape — as seen in the few pictures released so far — suggests a rotational landslide, rather than a conical mud volcano. A rotational landslide moves along a rupture surface that is curved or concave, like the inside of a spoon. (LiveScience)

Pakistan has more than 80 active mud volcanoes in Balochistan province; there are about 10 locations having clusters of mud volcanoes. In the west, in Gwadar District, the mud volcanoes are very small and mostly sit in the south of Jabal-e-Mehdi toward Sur Bandar. Many more exist in the north-east of Ormara. The remainder are in Lasbela District and are scattered between south of Gorangatti on Koh Hinglaj to Koh Kuk in the North of Miani Hor in the Hangol Valley. In this region, the heights of mud volcanoes range between 240 to 470 m (about 800 to 1 550 feet).

By the latest reports [Wednesday morning UTC] there were 283 casualties as a result of this massive M7.7 earthquake. 400 are being reported as injured. By the same time, USGS reported 15 strong aftershocks.