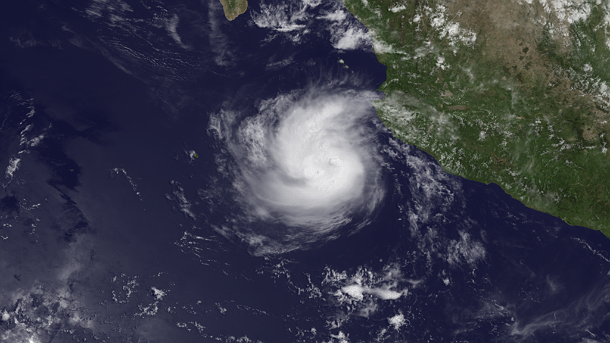 Tropical Storm Dalila strengthened to hurricane status on July 2, 2013. Dalila became the third hurricane of the 2013 Eastern Pacific Hurricane Season. The system should begin weakening in a day or so as it interacts with drier air and the developing cyclonic circulation to its east. 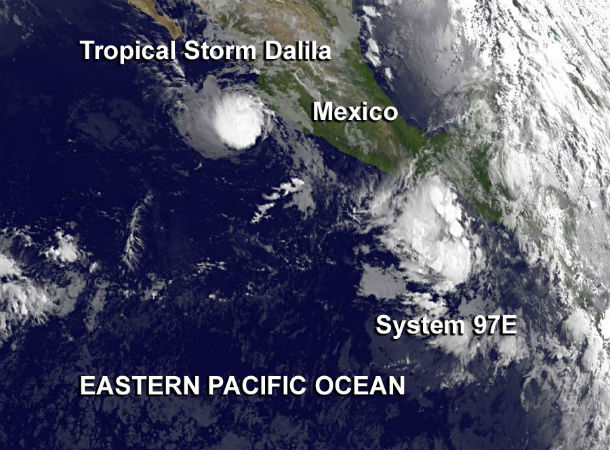 NOAA’s GOES-15 satellite captured an infrared image of Dalila as it was pulling away from the coast on July 2 at 12:00 UTC. In the meantime, System 97E started to form more southeast from Dalila. ( Credit: NASA GOES Project)

According to latest public advisory issued by US National Hurricane Center (NHC) at 21:00 UTC on July 2, 2013, the center of Hurricane Dalila was located about 195 miles (315 km) WSW of Manzanillo, Mexico at coordinates 18.4N 107.2W. The system is slowly drifting westward at speed of 2 mph (4 km/h). A slow motion toward the west or west-southwest is expected during the next 48 hours. 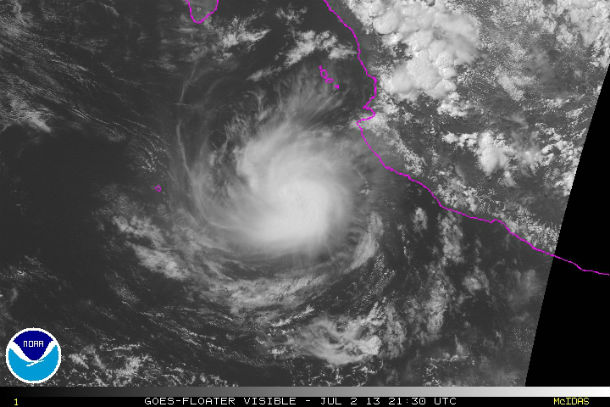 The Navgem, GFDL and GFDN models forecast the storm to move northwestward west of Baja California, while ECMWF and UKMET forecast a southwestward motion due to interaction with the approaching disturbance. The GFS and the HWRF forecast a slow westward to west-southwestward motion. The new forecast track is south of and slower than the previous track based on the current location and motion.

The slower and more southerly track would keep the cyclone over warmer sea surface temperatures than previously forecast. ECMWF, UKMET and Canadian models all forecast Dalila to dissipate before 120 hours due to interaction with the disturbance. The intensity forecast compromises between these possibilities, showing little change in strength for 36-48 hours followed by a gradual weakening as the new disturbance gets closer. 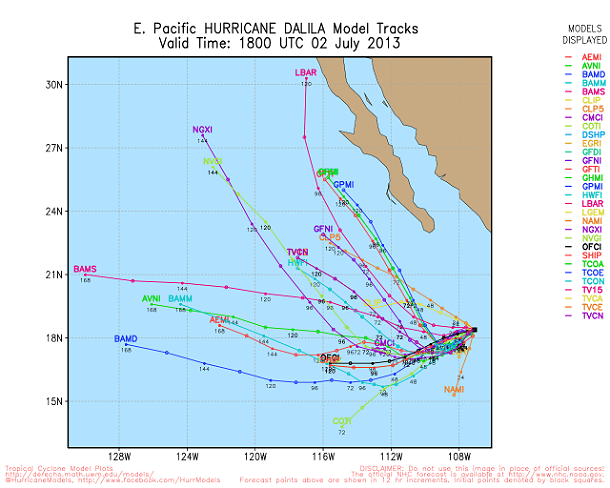 Swells generated by Dalila are affecting portions of the southwest coast of Mexico from near Zihuatanejo to Cabo Corrientes. These swells could cause life-threatening surf and rip current conditions.